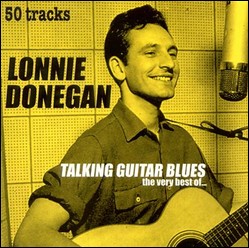 Anthony James Donegan MBE (29 April 1931 – 3 November 2002), known as Lonnie Donegan, was a British skiffle singer, songwriter and musician, referred to as the "King of Skiffle", who influenced 1960s British pop musicians.[1][2][3] The British Hit Singles & Albums lists him as "Britain's most successful and influential recording artist before The Beatles".

Born in Glasgow and raised in London from the age of 1, Donegan had 31 UK Top 30 single hits, 24 being successive and three at number one. He was the first British male singer with two US Top 10 hits.[1] Donegan received an Ivor Novello lifetime achievement award in 1997 and in 2000 he was made an MBE.

Lonnie Donegan was born Anthony James Donegan in Bridgeton, Glasgow, Scotland, on 29 April 1931. He was the son of an Irish mother and a Scots father, a professional violinist who had played with the Scottish National Orchestra. In 1933, he moved with his family to East Ham in East London.[4] Donegan was evacuated to Cheshire to escape the Blitz in the Second World War and attended college in Altrincham.

Donegan married three times. He had two daughters by his first wife, Maureen Tyler (divorced 1962), a son and a daughter by his second wife, Jill Westlake (divorced 1971), and three sons by his third wife, Sharon, whom he married in 1977.

Donegan died on 3 November 2002, aged 71, after a heart attack in Market Deeping, Lincolnshire mid-way through a UK tour,[5] and before he was due to perform at a memorial concert for George Harrison with the Rolling Stones. He had had cardiac problems since the 1970s and had several heart attacks.

As a child growing up in the early 1940s Donegan listened mostly to swing jazz and vocal acts, and became interested in the guitar.[4] Country & western and blues records, particularly by Frank Crumit and Josh White, attracted his interest and he bought his first guitar at 14 in 1945.[4] He learned songs such as "Frankie and Johnny", "Puttin' On the Style", and "The House of the Rising Sun" by listening to BBC radio broadcasts.[4] By the end of the 1940s he was playing guitar around London and visiting small jazz clubs.[6]

Donegan first played in a major band after Chris Barber heard that he was a good banjo player and, on a train, asked him to audition. Donegan had never played the banjo but he bought one for the audition and succeeded more on personality than talent.[4] His stint with Barber's trad jazz band was interrupted when he was called up for National Service in 1949, but while in the army at Southampton, he was the drummer in Ken Grinyer's Wolverines Jazz Band at a local pub. A posting to Vienna brought him into contact with American troops, and access to US records and the American Forces Network radio station.[6]

In 1952 he formed the Tony Donegan Jazzband, which played around London. On 28 June 1952 at the Royal Festival Hall they opened for the blues musician Lonnie Johnson.[4] Donegan had adopted his first name as a tribute. He used the name at a concert at the Royal Albert Hall on 2 June 1952.[7]

In 1953 cornetist Ken Colyer was imprisoned in New Orleans for a visa problem. He returned to Britain and joined Chris Barber's band. They changed the name to Ken Colyer's Jazzmen and made its first public appearance on 11 April 1953 in Copenhagen. The following day, Chris Albertson recorded Ken Colyer's Jazzmen and the Monty Sunshine Trio – Sunshine, Barber, and Donegan – for Storyville Records. These were Donegan's first commercial recordings.

While in Ken Colyer's Jazzmen with Chris Barber, Donegan sang and played guitar and banjo in their Dixieland set. He began playing with two other band members during the intervals, to provide what posters called a "skiffle" break, a name suggested by Ken Colyer's brother, Bill, after the Dan Burley Skiffle Group of the 1930s.[4] In 1954 Colyer left, and the band became Chris Barber's Jazz Band.[6]

With a washboard, tea-chest bass and a cheap Spanish guitar, Donegan played folk and blues songs by artists such as Lead Belly and Woody Guthrie.[4] This proved popular and in July 1954 he recorded a fast version of Leadbelly's "Rock Island Line", featuring a washboard but not a tea-chest bass, with "John Henry" on the B-side.[4] It was a hit in 1956[8] (which also later inspired the creation of a full album, An Englishman Sings American Folk Songs, released in America on the Mercury label in the early 1960s), but, because it was a band recording, Donegan made no money beyond his session fee. It was the first debut record to go gold in the UK, and it reached the Top Ten in the United States.[4] This recording has proved greatly influential on musicians who heard it in their younger days and for whom it seems to have been a catalyst in their musical motivation and careers. His next single for Decca, "Diggin' My Potatoes", was recorded at a concert at the Royal Festival Hall on 30 October 1954.[4] Decca dropped Donegan thereafter, but within a month he was at the Abbey Road Studios in London recording for EMI's Columbia label. He had left the Barber band, and by spring 1955, signed a recording contract with Pye. His next single "Lost John" reached No. 2 in the UK Singles Chart.[4]

He appeared on television in the United States on the Perry Como Show and the Paul Winchell Show.[4] Returning to the UK, he recorded his debut album, Lonnie Donegan Showcase, in summer 1956, with songs by Lead Belly and Leroy Carr, plus "I'm a Ramblin' Man" and "Wabash Cannonball". The LP sold hundreds of thousands.[4] The skiffle style encouraged amateurs and one of many groups that followed was the Quarrymen, formed in March 1957 by John Lennon. Donegan's "Gamblin' Man"/"Puttin' On the Style" single was number one in the UK in July 1957, when Lennon first met Paul McCartney.[1]

Donegan went on to successes such as "Cumberland Gap" and "Does Your Chewing Gum Lose Its Flavour (On the Bedpost Overnight?)", his biggest hit in the U.S., on Dot.[4] He turned to music hall style with "My Old Man's a Dustman" which was not well received by skiffle fans and unsuccessful in America on Atlantic in 1960. But it reached number one in the UK. Donegan's group had a flexible line-up, but was generally Denny Wright or Les Bennetts (of Les Hobeaux and Days of Skiffle, led by singer Dave George), playing lead guitar and singing harmony, Micky Ashman or Pete Huggett – later Steve Jones – on upright bass, Nick Nichols – later Pete Appleby, Mark Goodwin and Ken Rodway (now a Christian author and minister) on drums or percussion, and Donegan playing acoustic guitar or banjo and singing the lead.[4]

He continued in the UK charts until 1962, before succumbing to the Beatles and beat music.[4]

Donegan recorded sporadically during the 1960s, including sessions at Hickory Records in Nashville, Tennessee, with Charlie McCoy, Floyd Cramer and the Jordanaires. After 1964, he was as a record producer for most of the decade at Pye Records. Among those he worked with was Justin Hayward.[4]

Donegan was unfashionable through the late 1960s and 1970s (although his "I'll Never Fall in Love Again" was recorded by Tom Jones in 1967 and Elvis Presley), and he began to play the American cabaret circuit. A departure from his normal style was an a cappella recording of "The Party's Over".

There was a reunion concert with the original Chris Barber band in Croydon in June 1975. A bomb scare meant that the recording had to be finished in the studio, after an impromptu concert in the car park. The release was entitled The Great Re-Union Album.[4]

He had his first heart attack in 1976 while in the United States and had quadruple bypass surgery. He returned to attention in 1978 when he recorded his early songs with Rory Gallagher, Ringo Starr, Elton John and Brian May. The album was called Putting on the Style.[4] A follow-up featuring Albert Lee saw Donegan in less familiar country and western vein. By 1980, he was making regular concert appearances again, and another album with Barber followed. In 1983 Donegan toured with Billie Jo Spears, and in 1984, he made his theatrical debut in a revival of the 1920 musical Mr Cinders. More concert tours followed, with a move from Florida to Spain. In 1992 he had further bypass surgery following another heart attack.[4]

In 1994, the Chris Barber band celebrated 40 years with a tour with both bands. Pat Halcox was still on trumpet (a position he retained until July 2008). The reunion concert and the tour were on CD and DVD.

Donegan had a late renaissance when in 2000 he appeared on Van Morrison's album The Skiffle Sessions – Live in Belfast 1998, an acclaimed album featuring him singing with Morrison and Chris Barber, with a guest appearance by Dr John. Donegan also played at the Glastonbury Festival in 1999, and was made an MBE in 2000.

Mark Knopfler released a tribute to Donegan entitled "Donegan's Gone" on his 2004 album, Shangri-La, and said he was one of his greatest influences.[2] Donegan's music formed a musical starring his two sons. Lonnie D – The Musical took its name from the Chas & Dave tribute song which started the show. Subsequently, Peter Donegan formed a band to perform his father's material and has since linked with his father's band from the last 30 years with newcomer Eddie Masters on bass. They made an album together in 2009 entitled "Here We Go Again". Donegan's eldest son, Anthony, also formed his own band, as Lonnie Donegan Jnr.

On his album A Beach Full of Shells, Al Stewart paid tribute to Donegan in the song "Katherine of Oregon". In "Class of '58" he describes a British entertainer who is either Donegan or a composite including him.

Peter Sellers recorded Puttin' on the Smile featuring "Lenny Goonagain", who travels to the "Deep South" of Brighton and finds an "obscure folk song hidden at the top of the American hit parade", re-records it and reaches number one in the UK.

This article uses material from the article Lonnie Donegan from the free encyclopedia Wikipedia and it is licensed under the GNU Free Documentation License.