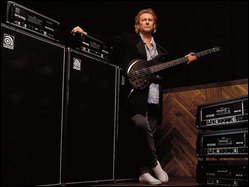 Christopher Russell Edward "Chris" Squire (born 4 March 1948) is an English musician, songwriter and singer, best known as the bass guitarist and backing vocalist for the progressive rock group Yes. He is the only original member still in the band, as well as the only member in Yes history to appear on every album.

He is widely regarded as the dominant bass guitarist among the early seventies British progressive rock bands, influencing peers and later generations of bassists with his incisive sound and elaborately contoured, melodic bass lines. His name is also associated with his trademark instrument, the Rickenbacker 4001 electric bass, which was introduced in England in 1964. His 1975 solo album Fish Out of Water was widely acclaimed.

Squire was born in Kingsbury, a suburb of northwest London, in England. His father was a cab driver, and his mother a housewife. He was trained in the St Andrew's church choir as a young boy, beginning his musical career with a group called the "Selfs", along with his friend Andrew Jackman who played the keyboards. The band had their own venue at the St Andrew's church hall where on Friday nights they played at their own club, called appropriately, the "Graveyard Club". This was run by a group of local Grammar School boys which included Jonathan Angell, Bill Mesley, Chris Mann and Colin Mallett.

When Squire was about sixteen, The Beatles and Paul McCartney were the catalyst that prompted him to consider a career in music and to take up the bass guitar.[1] In 1964, he was suspended from the Haberdashers' Aske's Boys' School for "having long hair", and given money to get a haircut. Instead he went home, used the money for other things, and never returned to school.

Squire was fond of experimenting with LSD in the 1960s, until an incident where he had a bad acid trip. He recalled that "it was the last time I ever took it, having ended up in St Stephen's Hospital in Fulham for a couple of days not knowing who I was, or what I was, or who anybody else was."[2] He also recalled that he spent months inside his girlfriend's apartment, afraid to leave, and it was during this time that he developed his style on the bass. He recovered and never used LSD again.

Squire's first bass was a Futurama, "very cheap, but good enough to learn on."[3] He acquired his signature Rickenbacker 4001 bass in 1965, while working at Boosey & Hawkes. His early influences were diverse, ranging from church and choral music to the Merseybeat sounds of the early 1960s and he studied the bass styles of John Entwistle, Jack Bruce, and Larry Graham.[3] Squire's first musical groups The Selfs, The Syn (both including Jackman), and later, Mabel Greer's Toyshop, would introduce him to his early Yes collaborators Peter Banks and Jon Anderson. In 1965, he made his first public appearance with the Selfs at "The Graveyard" club in St Andrew's Church Hall.[4]

During his first conversation with Anderson, the pair broke the ice by discussing one of their favourite groups, Simon & Garfunkel (Yes later covered the duo's "America") and Squire discovered that he and Anderson were both into vocal groups. His other influences included The Fifth Dimension and The Beatles.[5] Squire claimed Yes was formed with Anderson, drummer Bill Bruford and keyboardist Tony Kaye partly out of necessity. "I couldn't get session work because most musicians hated my style. They wanted me to play something a lot more basic. We started Yes as a vehicle to develop everyone's individual styles."[6]

Yes released their first record in 1969, and though the band have had many personnel changes over the years, they have continued to record and tour for over 40 years. Squire is the only original member who has remained in the line-up throughout the band's recording tenure, with Jon Anderson only having been absent on 1980's Drama and 2011's Fly From Here. He has also been one of the main forces behind the band's music, as well as "perhaps the most enigmatic" group member.[7]

While Anderson typically handled the lyrics, Squire co-wrote much of the band's music with guitarist Steve Howe (with Anderson chipping in occasionally, as well). In addition, Squire and Howe would supply backing vocals in harmony with Anderson, which can be heard on a multitude of Yes songs (for example, "South Side of the Sky" and "Close to the Edge").

During the band's formative years Squire was frequently known for his tardiness, a habit that drummer Bill Bruford often complained about. Because of this, Squire would frequently drive at unsafe speeds to get to gigs on time, once causing an accident on the way to a gig in West Germany after he fell asleep at the wheel, although nobody was injured.

As Squire, along with Alan White and Steve Howe, co-owned the "Yes" name at the time, the 1989 ABWH line-up without him (which contained Anderson, Bruford, Wakeman and Howe) could not record under that name.

Squire has concentrated overwhelmingly on Yes' music over the years, and his solo works have been few and far between. His first solo record was 1975's Fish Out of Water, featuring Yes alumni Bill Bruford on drums and Patrick Moraz on keyboards and The Syn/The Selfs alumnus Andrew Jackman also on keyboards. Squire was later a member of the short-lived XYZ (eX-Yes/Zeppelin) in 1981, a group composed of Alan White (Yes) on drums and Jimmy Page (Led Zeppelin) on guitar. XYZ recorded several demo tracks at Squire's home studio in Virginia Water, but never produced anything formal, though two of the demos provided the basis for two later Yes tracks, "Mind Drive" and "Can You Imagine?". Squire also played a role in bringing Trevor Rabin into the Cinema band project, which became the 90125 line-up.

Yes continues to be active as of 2013. In July 2011, they released Fly From Here. In December 2011, new lead vocalist, Benoit David, became ill, causing cancellation of three shows. A new lead vocalist, Jon Davison, joined Yes in April 2012 and as of December 2012 was included in the lineup for shows scheduled through April 2013.

In later years, Squire would join with Yes guitarist Billy Sherwood in a side project called Conspiracy. This band's self-titled debut album contained the nuclei of several songs that had appeared on Yes' recent albums. Conspiracy's second album, The Unknown, was released in 2003.

In late 2004, Squire joined a reunion of The Syn, subsequently leaving the band in May 2006. He worked on two solo projects with other former Syn collaborators Gerard Johnson, Jeremy Stacey and Paul Stacey. A Christmas album, Chris Squire's Swiss Choir, was released in 2007 (with Johnson, J. Stacey and Steve Hackett).

On 9 February 2009, Squire was rushed to a hospital to treat an aneurysm in his leg, leading ultimately to the cancellation of the remaining dates of a leg of the In the Present tour. He has since fully recovered, and touring resumed.

Squire's bass playing is noted for being aggressive, dynamic, and melodic. Squire's main instrument is a 1964 Rickenbacker bass (model RM1999, serial number DC127), which he has owned and played since 1965the year it was first introduced. In many ways, the Rickenbacker was the polar opposite of the then commonly used Fender bass. (In fact, the electric bass at the time was often referred to as the "Fender.") The RM1999 was a budget, monophonic version of Rickenbacker's 4001 stereo bass. This model was imported into the UK by Rose Morris Ltd (hence the RM prefix on the model number) and, according to Squire's official website, was only the fourth bass of its type to be imported into Britain from the United States.

Squire mentioned in a 1979 interview with Circus Weekly that he acquired this bass while working at the Boosey & Hawkes music store in London.[3] This instrument, with its warmth, is a significant part of Squire's unique sound. Due to its distinct high/mid tone, it allowed the bass to take on a more "lead" role, which suited Squire perfectly. Unlike the grooving low end thump established by James Jamerson and imitated throughout the world of rock and R&B, Squire constructed contrapuntal lines reminiscent of a "Bach/Baroque" style where the bass played a separate melody from the main theme. The fact that the Rickenbacker had a "harpsichord-like" sound suited this approach perfectly.

According to his interview in Guitar Player magazine in October 1973, Squire obtained his distinctive tone at the time by rewiring his RM1999 into stereo and sending the bass and treble pick-ups each into a separate amplifier. By splitting the signal from his bass into dual high and low frequency outputs and then sending the low frequency output to a conventional bass amplifier and the high-frequency output to a separate lead guitar amplifier, Squire produced a tonal 'sandwich' that added a growling, overdrive edge to the sound while retaining the Rickenbacker's powerful bass response. This gave his bass sound bright, growling higher frequencies and clean, solid bass frequencies. This technique allowed Squire to utilise harmonic distortion on his bass while avoiding the flat, fuzzy sound, loss of power and poor bass response that typically occurs when bass guitars are overdriven through an amplifier or put through a fuzz box. During an interview to Bass Player magazine in January 2009, Squire claimed to have rewired his bass to stereo, even before Rickenbacker introduced the Rick-O-Sound feature, so he could send the output of the bass (neck) pick-up through a fuzz box, while keeping the treble (bridge) pick-up clean, because the last sounded "horribly nasal" when used with the fuzz effect.[8] He also plays with a pick which contributes to the sharp attack as well as using fresh Rotosound Swing Bass strings for every show.[9] Squire's intricate and complex bass playing style has influenced subsequent bassists such as Billy Sheehan, Geddy Lee of Rush, Jon Camp of Renaissance (band), Steve Harris of Iron Maiden, Les Claypool of Primus, John Myung of Dream Theater, and Robert DeLeo of Stone Temple Pilots.[10]

In addition to his back-up vocals, Squire is featured as lead vocalist on two Yes songs: "Can You Imagine?" from Magnification and "The Man You Always Wanted Me to Be" from Fly From Here. He also has a more prominent vocal role on parts of Drama and 90125.

Chris Squire is commonly known by his nickname, "Fish", and the name is associated with many of his works including his solo record, Fish Out of Water, and the solo piece "The Fish (Schindleria Praematurus)" from the 1971 Yes record Fragile. The name has multiple origins, not least of which is the homonymic meanings of "bass", describing low frequency sound or the bass guitar as well as the fish. Additionally, Squire's astrological sign is Pisces. Further, in the early days of Yes' career, he once accidentally flooded a hotel room in Oslo, Norway, while taking a shower, and Bill Bruford gave him the nickname.[11] On the 2007 documentary "The Classic Artists Series 3: Yes", Bruford says that the nickname arose because Squire spent long periods in the bathroom while they shared a house together in Fulham.

Chris Squire married Nikki, whom he had met in 1970.[12][13] She sang on the 1981 Christmas single "Run with the Fox" and also the track "Hold Out Your Hand" from Fish Out of Water. In 1983, she formed Esquire, on whose first album Chris, Alan White and Trevor Horn assisted. Their family included Carmen Squire (Chris's stepdaughter), Chandrika and Camille Squire. The couple divorced after fifteen years of marriage.

Squire married actress Melissa Morgan on 8 May 1993. She was well known for her role as Brittany Norman on "The Young and The Restless" and later returned to the daytime program as Agnes Sorensen.[14][15][16] They have a son, Cameron. The two have since divorced.

Scotland became Squire's third wife. She gave birth to their first child, a daughter named Xilan, on 19 December 2008. They resided in the Chelsea neighbourhood of London.

This article uses material from the article Chris Squire from the free encyclopedia Wikipedia and it is licensed under the GNU Free Documentation License.