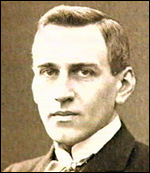 Stenhammar was born in Stockholm, and was the brother of architect Ernst Stenhammar. He received his first musical education in Stockholm. He then went to Berlin to further his studies in music. He became a glowing admirer of German music, particularly that of Richard Wagner and Anton Bruckner. Stenhammar himself described the style of his First Symphony in F major as "idyllic Bruckner".[1] He subsequently sought to emancipate himself and write in a more "Nordic" style, looking to Carl Nielsen and Jean Sibelius for guidance. The latter's Symphony No. 2, especially, had a great effect on him, leading him to change his style and refuse to refer to his First Symphony as anything but a trivial piece.

From 1906 to 1922 he was Artistic Director and chief conductor of the Gothenburg Symphony, the first full-time professional orchestra in Sweden. In this capacity, he organised many performances of music by contemporary Scandinavian composers. In 1909, he briefly held the position of director of music at Uppsala University, where he was succeeded the following year by Hugo Alfvén.

Wilhelm Stenhammar died of a stroke at 56 years of age in Jonsered in the historic province of Västergötland. He is buried in Gothenburg.

His works were quite varied and included two completed symphonies, a substantial Serenade for Orchestra, two piano concertos, four piano sonatas, a violin sonata, six string quartets, many songs and other vocal works, including several large-scale works for chorus or voices and orchestra: the early ballad Florez och Blanzeflor, Op. 3, written around 1891, Ithaka, Op. 21, from 1904, the cantatas Ett folk (A people) from 1905 and Sången (The song), Op. 44, from 1921.

Writing in The Chamber Music Journal, R.H.R. Silvertrust notes that Stenhammar's six string quartets are the most important written between those of Johannes Brahms and Béla Bartók. Whether or not this is so, there is no denying that Stenhammar's quartets represent a very important development during the twenty-five years he was writing chamber music. Tonally, they range from the middle late Romantics to a style akin to mature Sibelius. Though not unknown by the Swedish chamber music public, his string quartets have been neglected elsewhere. In 2008 Musikaliska konstföreningen published the world premiere edition of his Allegro Brillante for piano quartet composed in 1891 and his Allegro non tanto for piano trio composed in 1895.

Stenhammar was considered the finest Swedish pianist of his time. Pianists who venture into the realm of the string quartet often wind up writing compositions which sound as though they were composed at, and are perhaps better played on, the piano. That Stenhammar's works show no such trait is because for nearly half of his life, he worked intimately with the Aulin Quartet, the top Swedish string quartet of his day and one of the best then performing in Europe. In fact, he toured throughout Europe with them for many years and a piano quintet was nearly always featured on their programmes. Thus it is no accident that his quartets show a fine grasp of instrumental timbre and technique. The part writing is sure, always idiomatic and evenly distributed.

This article uses material from the article Wilhelm Stenhammar from the free encyclopedia Wikipedia and it is licensed under the GNU Free Documentation License.

Franz Schubert Ungarische Melodie für Klavier h-moll D 817
Update Required To play the media you will need to either update your browser to a recent version or update your Flash plugin.