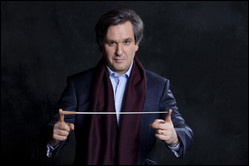 Cornelis Dopper Andante de la symphonie no 3, en ut mineur
Update Required To play the media you will need to either update your browser to a recent version or update your Flash plugin.