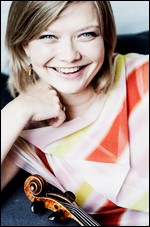 Ibragimova was born in Polevskoy, Russian SSR, to a Bashkir family. Her family was musical, and she began playing the violin at the age of 4. At 5 she started at the Gnessin State Musical College in Moscow, studying under Valentina Korolkova, and by the age of 6 had started her career by playing with various orchestras, including the Bolshoi Theatre Orchestra. She was aged 10 in 1996 when her father, Rinat Ibragimov, took up the post of principal double bass with the London Symphony Orchestra, and the family moved to England. In the following year, Ibragimova began her studies at the Yehudi Menuhin School (where her mother is professor of violin) under Natasha Boyarskaya.

In December 1998, Ibragimova performed with Nicola Benedetti at the opening ceremony of the 50th Anniversary of the Universal Declaration of Human Rights at UNESCO in Paris; they played Bach's double violin concerto under the baton of Yehudi Menuhin. Menuhin died three months later, and Ibragimova performed the slow movement of the same concerto at his funeral in Westminster Abbey.

After finishing her studies at the Yehudi Menuhin School, Ibragimova went on to the Guildhall School of Music and Drama for a year, and then to the Royal College of Music, studying under Gordan Nikolitch. Ibragimova has also studied with Christian Tetzlaff since 2000, most recently under the auspices of the Kronberg Academy Masters programme.

Together with other students from the Royal College, she formed the period-instrument string quartet Chiaroscuro, specialising in music from the classical period.

After winning several international competitions, in 2002 Ibragimova won the London Symphony Orchestra Music Scholarship (formerly the Shell Prize), which was an important boost to her solo career. The next breakthrough came in 2005 when Ibragimova played and directed Mozart's second violin concerto with the Kremerata Baltica in Mozartwoche at the Salzburg Mozarteum.

For recitals and chamber music, Ibragimova has appeared at venues including Wigmore Hall in London, Concertgebouw in Amsterdam, Mozarteum University of Salzburg, Musikverein in Vienna, Carnegie Hall in New York, the Palais des Beaux-Arts in Brussels. She has appeared at festivals including Salzburg, Verbier, MDR Musiksommer, Lockenhaus, Manchester International, and Aldeburgh. With her regular recital partner, Ibragimova performed the complete Beethoven violin sonatas at the Wigmore Hall London in 2009/10 (the recordings of which were released on the Wigmore Hall Live label). In 2015 she performed the six Bach Solo Sonatas and Partitas in the Royal Albert Hall as part of the Promenade Concerts.

Her first CD for Hyperion Records was the complete violin works of Karl Amadeus Hartmann in 2007, which was followed by the two violin concertos of Nikolai Roslavets in 2008, a disc of the complete violin and piano works by Karol Szymanowski, and the JS Bach Sonatas and Partitas for solo violin in 2009.

Ibragimova has been the recipient of a number of awards including the Royal Philharmonic Society Young Artist Award 2010, and Emily Anderson Prize (the youngest-ever winner), Borletti-Buitoni Trust, and a Classical BRIT. She performs on a c.1775 Anselmo Bellosio provided by Georg von Opel.[2]

She was appointed a Member of the Order of the British Empire (MBE) in the 2016 New Year Honours for services to music.[3]

Since 2015 Ibragimova has been married to writer and classical music critic Tom Service, whom she met when he interviewed her for The Guardian. They live in Greenwich, London.[4]

This article uses material from the article Alina Ibragimova from the free encyclopedia Wikipedia and it is licensed under the GNU Free Documentation License.