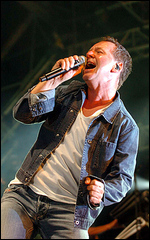 James Kerr (born 9 July 1959) is a Scottish singer-songwriter and the lead singer of the rock band Simple Minds. He achieved five UK No. 1 albums with the band, including a No. 1 single in 1989 with "Belfast Child".[1] He released his first solo album, Lostboy! AKA Jim Kerr, on 27 May 2010. Kerr's voice has been described as "David Bowie's rich baritone melded with Bryan Ferry's velvety croon".[2]

Born in Toryglen, Glasgow with Irish ancestry,[3] Kerr attended Holyrood R.C. Secondary School there. He had a stammer during childhood and in his early teens.[4]

In 1977, he was one of the founding members of the 6-piece punk rock band Johnny and the Self Abusers. Calling himself Pripton Weird, he played keyboards and shared vocals with John Milarky. Allan McNeill was also involved with the band, and went on to be the manager of the pop band Hue and Cry. The band lasted 8 months, during which time Kerr emerged as one of the main songwriters. In November 1977, they changed their name to Simple Minds, quickly reduced to 4 members, then increased to 5, then 6, then back to 5 before a period of stability ensued.[5]

He continues to record and tour with Simple Minds, who released their latest album Walk Between Worlds in spring 2018. Kerr currently lives in Taormina, Sicily, where he runs a hotel, Villa Angela.[6]

Three UK club dates in the spring of 2010 featured both new material and Simple Minds' back catalogue and a full European tour followed.[7]

"Shadowland" was released as the first single from the album. The album version of the song was made available to listen as an audio stream on 13 March 2010. A new remix, more suitable for radio airplay, was done by Cenzo Townshend whom Jim Kerr chose because of Townshends's previous work with Simple Minds' latest album Graffiti Soul.[8] A promotional single with the new radio mixes of the song was shipped to radio stations on 4 April 2010.[9][10]
"Shadowland" was originally meant to be released as a commercial physical release, but it was eventually only released as a download single on 9 May 2010. The three tracks on the download single were the same three tracks previously available on the "Shadowland" radio promo single.[8]

"She Fell in Love With Silence" was released as a single on 15 August 2010. The single was released in both digital and physical formats.[13][14]

Jim Kerr released his first solo album Lostboy! AKA Jim Kerr on 17 May 2010 under the name "Lostboy! AKA". Explaining the project name and ethos, he commented "I didn’t want to start a new band. I like my band (laughs)...and I didn’t want a point blank Jim Kerr solo album either."[1][15]

The first Lostboy! AKA 10-date (European) tour occurred from 18 to 31 May 2010. In August 2010, Lostboy! AKA embarked on a 12-date "Electroset Radio" tour for various European/UK radio stations but the band played only 4 dates (3 in Germany and 1 in Spain). A third Lostboy AKA! tour, a new 25-date "Electroset" (European) one (featuring Simon Hayward and Sarah Brown) was scheduled from 18 October to 3 December 2010 but the band played only 9 shows till the rest of the tour was cancelled after the performance on 13 November 2010 in Dublin, Ireland because of Jim's mother Irene who had become ill with a recurrence of cancer.[16]

The second Lostboy! album, The Return Of The Lostboy!, was first mentioned by Jim Kerr in February 2010 during the post-production work on the first album. Jim Kerr wrote, demoed or recorded up to 25 songs for the new album. Its release was planned after Simple Minds' 2013 world tour but was indefinitely postponed.[17]

Kerr helped organise a 90th birthday party for Nelson Mandela at Hyde Park, London on 27 June 2008. The event came 20 years after Kerr and Simple Minds played a role (releasing the single Mandela Day amongst other activities) in the 70th birthday concert at Wembley Stadium, which was held to demand Mandela's release. Mandela attended the 2008 event in person.

Jim Kerr is a Celtic fan and an active supporter of the club.[20]

Mark Kerr, the vocalist's brother, is also a musician, playing in groups such as the hard rock band Gun.[21]

This article uses material from the article Jim Kerr from the free encyclopedia Wikipedia and it is licensed under the GNU Free Documentation License.