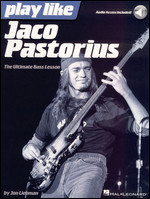 John Francis Anthony "Jaco" Pastorius III (/ˈdʒɑːkoʊ pæsˈtɔːriəs/, December 1, 1951 – September 21, 1987) was an American jazz bassist who was a member of Weather Report from 1976 to 1981. He worked with Pat Metheny, Joni Mitchell, and recorded albums as a solo artist and band leader.[1] His bass playing employed funk, lyrical solos, bass chords, and innovative harmonics. He was inducted into the Down Beat Jazz Hall of Fame in 1988, one of only seven bassists (and the only electric bassist) so honored.

Growing up in Fort Lauderdale

John Francis Pastorius was born December 1, 1951, in Norristown, Pennsylvania. He was the oldest of three boys born to Stephanie, his Finnish mother, and Jack Pastorius, a charismatic singer and jazz drummer who spent much of his time on the road. His family moved to Oakland Park in Fort Lauderdale when he was eight.[2]

Pastorius' nickname was influenced by his love of sports and also by the umpire Jocko Conlan. In 1974, he began spelling it "Jaco" after it was misspelled by his neighbor, pianist Alex Darqui. His brother called him "Mowgli" after the wild boy in The Jungle Book because he was energetic and spent much of his time shirtless on the beach, climbing trees, running through the woods, and swimming in the ocean. He attended St. Clement's Catholic School in Wilton Manors and was an altar boy at St. Clement's Church. His confirmation name was Anthony, thus expanding his name to John Francis Anthony Pastorius. He was intensely competitive and excelled at baseball, basketball, and football.[2]

Pastorius played drums until he injured his wrist playing football at age 13. The damage to his wrist was severe enough to warrant corrective surgery and inhibited his ability to play drums - specifically, being able to consistently hit the snare drum hard enough to satisfy his own standards.[2]

By 1968–1969, at the age of 17, Pastorius had begun to appreciate jazz and had saved enough money to buy an upright bass. Its deep, mellow tone appealed to him, though it strained his finances. He had difficulty maintaining the instrument, which he attributed to the humidity in Florida. When he woke one day to find it had cracked, he traded it for a 1962 Fender Jazz Bass.[3]

In his teens he played bass guitar for Wayne Cochran and the C.C. Riders.[4]

Before recording his debut album, Pastorius attended a concert in Miami by the jazz fusion band Weather Report. After the concert, he approached keyboardist Joe Zawinul, who led the band. As was his habit, he introduced himself by saying, "I'm John Francis Pastorius III. I'm the greatest bass player in the world."[8] Zawinul admired his brashness and asked for a demo tape. After listening to the tape, Zawinul realized that Pastorius had considerable skill.[2] They corresponded, and Pastorius sent Zawinul an early rough mix of his solo album.

After bassist Alphonso Johnson left Weather Report, Zawinul asked Pastorius to join the band. Pastorius made his band debut on the album Black Market (Columbia, 1976), in which he shared the bass chair with Johnson. Pastorius was fully established as sole band bass player for the recording of Heavy Weather (Columbia, 1977), which contained the Grammy-nominated hit "Birdland".[4]

Pastorius left Weather Report in 1982 due to clashes with tour commitments for his other projects, plus a growing dissatisfaction with Zawinul's increasing synthesized and orchestrated approach to the band's music.[2]

Pastorius recorded his second solo album, Word of Mouth (Warner Bros., 1981), with experienced sidemen Wayne Shorter, Peter Erskine, Don Alias, Michael Brecker, Toots Thielemans, Jack DeJohnette, Tom Scott, Chuck Findley, and Howard Johnson.[9] Warner Bros. had signed Pastorius to a favorable contract in the late 1970s due to his groundbreaking playing and his star quality, which they had hoped would lead to his becoming a bankable commercial asset. Pastorius used this contract to set up his Word of Mouth big band.[2] Alias, Erskine, and Thielemans played in the band (later described as "an unfulfilled dream, a worthy concept that did not last long enough to live up to its potential.")[10]

During his time with Weather Report, Pastorius began abusing alcohol and illegal drugs,[2][11] which exacerbated existing mental problems and led to erratic behavior.[12] In 1982, he toured with Word of Mouth as a 21-piece big band. While in Japan, to the alarm of his band members, he shaved his head, painted his face black, and threw his bass guitar into Hiroshima Bay.[2] He was diagnosed with bipolar disorder in late 1982 after the tour.[13] Pastorius had shown signs of bipolar disorder before his diagnosis, but they were considered eccentricities or character flaws.[14][15] Hypomania, a psychiatric diagnosis for a milder form of mania characterized by periodic hyperactivity and elevated mood, has been associated with enhanced creativity.[16][17]

Despite press attention, Word of Mouth didn't sell well, and the demos for Holiday for Pans were received poorly by Warner Bros., leading to Pastorius being released from his contract.[2] He released a third album, 1983's Invitation, a live recording from the 1982 Word of Mouth dates in Japan. Job offers disappeared as his alcohol and drug problems dominated his life, and he wound up homeless. He made appearances on albums by Randy Bernsen, Deadline, Brian Melvin, Jimmy Cliff, and Mike Stern. In 1985, he made the instructional video Modern Electric Bass, hosted by bassist Jerry Jemmott. In 1986, he toured with guitarist Biréli Lagrène.

Toward the end of his life, Pastorius apparently developed a self-destructive habit of provoking bar fights and allowing himself to be beaten up.[2] After sneaking onstage at a Carlos Santana concert on September 11, 1987 and being ejected from the premises, Pastorius made his way to the Midnight Bottle Club in Wilton Manors, Florida.[18] After reportedly kicking in a glass door, having been refused entrance to the club, he was engaged in a violent confrontation with the club's bouncer, Luc Havan, who had a black belt in karate.[19] Pastorius was hospitalized for multiple facial fractures and injuries to his right eye and left arm and fell into a coma.[20] There were encouraging signs that he would come out of the coma and recover, but they soon faded. A massive brain hemorrhage a few days later led to brain death. Pastorius was then disconnected from life support and died on September 21, 1987, aged 35, at Broward General Medical Center in Fort Lauderdale.[18]

Luc Havan faced a charge of second-degree murder. He pleaded guilty to manslaughter and was sentenced to twenty-two months in prison and five years' probation. After serving four months in prison, he was paroled for good behavior.[21]

Until about 1970, most jazz musicians played the acoustic, upright bass, or double bass. Bassists remained in the background with the drummer, forming the rhythm section, while the saxophonist, trumpeter, or vocalist handled the melody and led the band. Pastorius's stage presence was more like Jimi Hendrix's. He played an electric bass from which he had removed the frets. He played fast and loud, sang, and did flips. He spread powder on the stage so he could dance like James Brown. He joked around and talked to the crowd. A self-described Florida beach bum, he often went barefoot and shirtless. He was tall, lean, and strong, and for someone who played sports the name "Jocko" fit. His thumbs were double jointed and his fingers were long and thin.[2][8]

Pastorius was noted for his virtuosic bass lines which combined Afro-Cuban rhythms, inspired by the likes of Cachao Lopez, with R&B to create 16th-note funk lines syncopated with ghost notes. He played these with a floating thumb technique on the right hand, anchoring on the bridge pickup while playing on the E and A strings and muting the E string with his thumb while playing on higher strings. Examples include "Come On, Come Over" from the album Jaco Pastorius and "The Chicken" from The Birthday Concert.

Jaco Pastorius played a 1962 Fender Jazz Bass that he called the Bass of Doom. He acquired it fretless, or he removed the frets with a butter knife (his recollections varied over the years),[23] and sealed the fretboard with epoxy resin.[24]

The bass was stolen from a park bench in Manhattan in 1986, then found in a guitar shop in 2006, but the owner didn't want to give it up. The Pastorius family enlisted lawyers to help but nearly went bankrupt in 2010. Robert Trujillo, bass guitarist for Metallica, considered Jaco Pastorius to be one of his heroes, and he felt that the family ought to have the bass. Trujillo helped pay to have it returned to them.[25][26]

During the final three years of his life he used Hartke cabinets because of the character of aluminum speaker cones (as opposed to paper speaker cones). These provided a bright, clear sound. He typically used the delay in a chorus-like mode, providing a shimmering stereo doubling effect. He often used the fuzz control built into the Acoustic 360. For the bass solo "Slang" on Weather Report's live album 8:30 (1979), Pastorius used the MXR digital delay to layer and loop a chordal figure and then soloed over it; the same technique, with a looped bass riff, can be heard during his solo on the Joni Mitchell concert video Shadows and Light.

Pastorius appeared as a guest on many albums by other artists, including Ian Hunter of Mott the Hoople, on All American Alien Boy in 1976. He can be heard on Airto Moreira's album I'm Fine, How Are You? (1977). His signature sound is prominent on Flora Purim's Everyday Everynight (1978), on which he played the bass melody for a Michel Colombier composition entitled "The Hope", and performed bass and vocals on one of his own compositions, entitled "Las Olas". Other recordings included Joni Mitchell's Hejira and Al Di Meola’s Land of the Midnight Sun, both released in 1976. Near the end of his career, he worked often with guitarist Mike Stern, guitarist Bireli Lagrene, and drummer Brian Melvin.

Bass Player magazine gave him second place on a list of the one hundred greatest bass players of all time, behind James Jamerson.[30] After his death in 1987, he was voted by readers to the Down Beat magazine Hall of Fame, joining bassists Jimmy Blanton, Ray Brown, Ron Carter, Charles Mingus, Charlie Haden, and Milt Hinton.[31]

Many musicians have composed songs in his honour, such as Pat Metheny's "Jaco" on the album Pat Metheny Group (1978)[32] and "Mr. Pastorius" by Marcus Miller on Miles Davis's album Amandla. Others who have dedicated compositions to him include Randy Brecker, Eliane Elias, Chuck Loeb, John McLaughlin, Bob Moses, Ana Popović, Dave Samuels, and the Yellowjackets.[2]

This article uses material from the article Jaco Pastorius from the free encyclopedia Wikipedia and it is licensed under the GNU Free Documentation License.