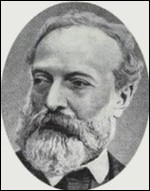 Antonio Joseph Bazzini (11 March 1818 – 10 February 1897) was an Italian violinist, composer and teacher. As a composer his most enduring work is his chamber music which has earned him a central place in the Italian instrumental renaissance of the 19th century. However his success as a composer was overshadowed by his reputation as one of the finest concert violinists of the nineteenth century. He also contributed to a portion of Messa per Rossini, specifically the first section of II. Sequentia, Dies Irae.

Bazzini was born at Brescia. As a young boy, he was a pupil of Faustino Camisani. At 17 he was appointed organist of a church in his native town. The following year he met Paganini and became completely influenced by that master's art and style. Paganini encouraged Bazzini to begin his concert career that year and he quickly became one of the most highly regarded artists of his time. From 1841 to 1845 he lived in Germany, where he was much admired by Schumann both as a violinist and a composer, as well as by Mendelssohn (Bazzini gave the first private performance of his Violin Concerto). After a short stay in Denmark in 1845, Bazzini returned to Brescia to teach and compose. In 1846 he played in Naples and Palermo. In 1849–1850 he toured Spain and from 1852 to 1863 lived in Paris. He ended his concert career with a tour of the Netherlands in 1864.

Returning once more to Brescia, Bazzini devoted himself to composition, gradually abandoning the virtuoso opera fantasias and character-pieces (such as the well-known La ronde des lutins, Elégie and Le muletier), which had formed a large part of his earlier work. He composed an opera, Turanda, in 1867 and produced a number of dramatic cantatas, sacred works, concert overtures, and symphonic poems over the next two decades. However, his greatest success as a composer was with his chamber music compositions. In 1868 he became president of the Società dei Concerti in Brescia, and was active in promoting and composing for quartet societies in Italy. In 1873 he became composition professor at the Milan Conservatory, where he taught Catalani, Mascagni, Pizzi, and Puccini, and later became the school's director in 1882. Bazzini died in Milan on 10 February 1897.

Bazzini was one of the most highly regarded artists of his time and influenced the great opera composer Giacomo Puccini. His most enduring work is his chamber music, which is written in the classic forms of the German school and has earned him a central place in the Italian instrumental renaissance of the 19th century. Of particular note is his String Quartet No. 1, which won the Milan Quartet Society's first prize in 1864. His music is characterized by a highly virtuosic technique that is expressive without too much sentiment. Bazzini played a violin by Giuseppe Guarneri, which after his death passed to M. Soldat-Roeger.

Artists who have recorded his music include Chloë Hanslip. But several far better-known virtuoso violinists have distinguished themselves by undertaking to record his fiendishly difficult La ronde des lutins (or Dance of the Goblins, with its extended passages of rapid double stops, artificial harmonics in double stops (using all four left fingers) and left-hand pizzicati. These include Bronislaw Huberman, Jascha Heifetz, Yehudi Menuhin, and Itzhak Perlman.

This article uses material from the article Antonio Bazzini from the free encyclopedia Wikipedia and it is licensed under the GNU Free Documentation License.

Saverio Mercadante Rondo aus dem Flötenkonzert e-moll
Update Required To play the media you will need to either update your browser to a recent version or update your Flash plugin.