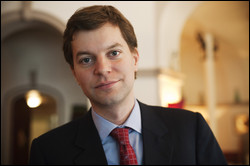 Till Fellner was born in Vienna and studied at the Konservatorium der Stadt Wien with Helene Sedo-Stadler, and subsequently with Alfred Brendel, Meira Farkas, Oleg Maisenberg and Claus-Christian Schuster. He won first prize in the Clara Haskil International Piano Competition in Vevey, Switzerland in 1993, and was awarded the Mozartinterpretationspreis of the Mozartgemeinde Wien in 1998.

Fellner has received critical acclaim for his performances of the masterworks of the baroque, classical, and romantic periods, particularly compositions by J.S. Bach, Mozart, Beethoven, Schubert, and Liszt. He performs musical rarities such as the piano sonata of Julius Reubke, which was composed in Weimar under the aegis of Liszt. Fellner also performs music of the Second Viennese School of Arnold Schoenberg, Alban Berg and Anton Webern, as well as the contemporary classical music of Heinz Holliger, György Kurtág, Thomas Larcher, and Harrison Birtwistle, including some premieres.

In 2008–2010, Fellner performed Beethoven's 32 piano sonatas in a seven-recital series in Vienna, Paris, London, New York City, and Tokyo. He also performed and recorded Beethoven's Piano Concertos Nos. 4 and 5 with the Montreal Symphony under the baton of Kent Nagano. In 2009, Fellner was featured in the award-winning German-Austrian documentary Pianomania, about a Steinway & Sons piano tuner, which was directed by Lilian Franck and Robert Cibis. The film was met with a positive review by The New York Times.[1]

This article uses material from the article Till Fellner from the free encyclopedia Wikipedia and it is licensed under the GNU Free Documentation License.

Giacomo Puccini "E lucevan le stelle" aus der Oper "Tosca"
Update Required To play the media you will need to either update your browser to a recent version or update your Flash plugin.