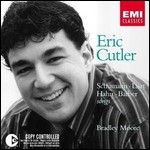 Eric Cutler is an American tenor notable for his performances of bel canto repertoire and Mozart operas in particular. He is a native of Adel, Iowa, and a graduate of Luther College. Cutler is an alumnus of the Metropolitan Opera Lindemann Young Artist Development Program and was a winner of the Metropolitan Opera National Council Auditions in 1998.[1] He won the Richard Tucker Award in 2005.[2]

From Debut to The Met

Cutler made his role debut as Gounod's Romeo at Opera Australia and has since performed Nadir in Bizet's Les pêcheurs de perles there. In 2008 he returned to Opera Australia for another role debut, Edgardo in Lucia di Lammermoor, conducted by Richard Bonynge.

Cutler made his Metropolitan Opera debut as the First Prisoner in Beethoven's Fidelio in a Jürgen Flimm production conducted by James Levine. He has since performed there many times in such roles as Tamino in Mozart's The Magic Flute and Andres in Wozzeck (both under Levine). Cutler sang the role of Arturo opposite Anna Netrebko in the Met's revival of Bellini's I puritani conducted by Patrick Summers.

He sang the role of the Shepherd in a controversial production of Karol Szymanowski's King Roger at the Opéra National de Paris in June 2009. He performed the Duke of Mantua in Giuseppe Verdi's Rigoletto, in a Fenice's production, for a tour in Italy which involved Reggio Emilia and Venice.

Cutler's most critically acclaimed performances have all been in Mozart operas. These include Tamino (Metropolitan Opera, Opera Theatre of St. Louis, Glyndebourne and Edinburgh Festivals), Belmonte in The Abduction from the Seraglio (Boston Lyric Opera, Houston Grand Opera and Teatro Real Madrid) and Don Ottavio in Don Giovanni (Wolf Trap Opera Company and Santa Fe Opera).

This article uses material from the article Eric Cutler from the free encyclopedia Wikipedia and it is licensed under the GNU Free Documentation License.