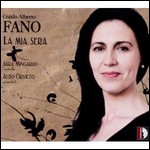 Sara Mingardo (born 2 March 1961) is an Italian classical contralto who has had an active international career in concerts and operas since the 1980s. Her complete recording of Anna in Hector Berlioz's Les Troyens won a Gramophone Award and both the Grammy Award for Best Opera Recording and the Grammy Award for Best Classical Album in 2002. Some of the other roles she has performed on stage or on disc include Andronico in Tamerlano, Mistress Quickly in Falstaff, Rosina in The Barber of Seville, and the title roles in Carmen, Giulio Cesare, Riccardo Primo, and Rinaldo. She has also recorded several Vivaldi cantatas, Bach cantatas, and such concert works as Mozart's Requiem, Rossini's Stabat Mater, and Vivaldi's Gloria among others.

Born in Venice, Mingardo studied singing with Paolo Ghitti in her native city at the Conservatorio di Musica Benedetto Marcello di Venezia. She won first prize at the Toti dal Monte international singing competition and the Prize Giulietta Simionato at the 23rd Vienna Competition. She made her professional opera debut in 1987 as Fidalma in Domenico Cimarosa's Il matrimonio segreto in Avezzano. Her career developed rapidly, and by 1989 she had already made appearances at La Scala, La Fenice, the Salzburg Festival, the Teatro Regio di Torino, and the Teatro di San Carlo among other major theatres.

Mingardo has since maintained a busy singing schedule. Her performance credits include appearances at the Aix-en-Provence Festival, the Bregenzer Festspiele, Carnegie Hall, the Festival de Beaune, the Festival della Valle d'Itria, the Grand Théâtre de Genève, La Monnaie, the Liceu, the Montreux-Vevey Festival, the Lausanne Opera, the Opéra de Monte-Carlo, the Opéra national de Montpellier, the Santa Fe Opera, the Schwetzingen Festival, the Semperoper, the Théâtre des Champs-Élysées, the Teatro Comunale di Bologna, the Teatro Comunale Florence, the Teatro de la Zarzuela, the Teatro Lirico di Cagliari the Teatro Massimo, the Teatro Lirico Giuseppe Verdi, and the Teatro Real among others. She has also sung with many notable orchestras in concert, including the Berlin Philharmonic, the Boston Symphony Orchestra, and the London Symphony Orchestra.

This article uses material from the article Sara Mingardo from the free encyclopedia Wikipedia and it is licensed under the GNU Free Documentation License.