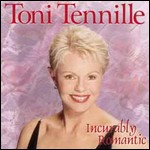 Cathryn Antoinette "Toni" Tennille (born May 8, 1940) is an American singer-songwriter and keyboardist, best known as one-half of the 1970s duo Captain & Tennille with her husband Daryl Dragon. Tennille has also done musical work independently of her husband, including solo albums and session work. Tennille has a contralto vocal range.[1]

Tennille was born and raised in Montgomery, Alabama, as part of a family of entertainers. Her father, Frank Tennille, who used the pseudonym Clark Randall, was a big band singer with Bob Crosby and the Bobcats and her mother, Cathryn Tennille, was a local television pioneer, being the hostess of Montgomerys first daytime TV talk show. Tennille's musical sisters, Jane, Louisa, and Melissa, all sang on her variety TV shows, as well as on the Captain & Tennille albums. Tennille began her career studying classical piano at Auburn University and singing with the university's big band, the Auburn Knights. Her sister, Louisa Tennille, is the background singer in her band.

Tennille is credited as singing backup vocals on Pink Floyd's The Wall ; However, her parts were ultimately scrapped and re-recorded by others before the album was released. [2] She also did backup singing for Art Garfunkel on Breakaway as well as for Elton John on his albums Caribou, Blue Moves, 21 at 33 and most notably on the song, Don't Let the Sun Go Down on Me .

On July 8, 1980, Tennille sang the national anthem at the Major League Baseball All-Star game at Dodger Stadium in Los Angeles.[3]

Tennille is 5 feet (Expression error: Unexpected round operator ) tall. She married her first husband Kenneth Shearer in June 1962 at the age of 22. They divorced in late 1972. She then married Daryl Dragon on November 11, 1975; they now live in Prescott, Arizona. On January 22, 2014, it was reported that she filed for divorce.

Tennille toured with The Beach Boys during the 1970s with Daryl Dragon, both playing keyboards for the group.

Toni Tennille filed for divorce after 39 years of marriage on January 16, 2014. Dragon said he was unaware of any discontent until being served with the divorce papers.[4]

This article uses material from the article Toni Tennille from the free encyclopedia Wikipedia and it is licensed under the GNU Free Documentation License.