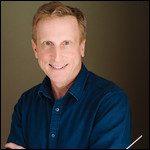 Born in France while his father was serving in the U.S. Foreign Service, Wolff spent his primary-school years in London. He received his higher education at Harvard and at Peabody Conservatory. Between Harvard and Peabody, he spent a year in Paris where he studied composition with Olivier Messiaen and conducting with Charles Bruck.[1] At Peabody, he studied piano with Leon Fleisher.

Wolff began his career in 1979 as assistant conductor to Mstislav Rostropovich at the National Symphony Orchestra, in Washington, D.C.,[2] where he worked until 1995. In June 1985, he was the first winner of the Seaver/National Endowment for the Arts Conductors Award.[3] He was music director of the Northeastern Pennsylvania Philharmonic from 1981 to 1986. Wolff then served as music director of the New Jersey Symphony Orchestra from 1986 to 1993.[4] From 1988–1992, Wolff was Principal Conductor of the Saint Paul Chamber Orchestra and then served as its Music Director from 1992–2000. He was Principal Conductor of the Grant Park Music Festival from 1994–1997.

In Europe, Wolff was Chief Conductor of the Frankfurt Radio Symphony Orchestra (which changed its name to the hr Symphony Orchestra in 2005) from 1997 to 2006. In February 2016, the National Orchestra of Belgium named Wolff its next music director, effective with the 2017-2018 season.[5]

Wolff has recorded extensively for Teldec, Sony and others, has been nominated three times for a Grammy and has twice won the Cannes Classical Award. His discography includes the complete Beethoven symphonies with the Frankfurt Radio Orchestra. As a conductor he has accompanied recordings by Rostropovich, Yo-Yo Ma, Joshua Bell, Hilary Hahn, Jean-Yves Thibaudet, Dawn Upshaw, Thomas Hampson, Jennifer Larmore, and jazz guitarist John Scofield. As well, Wolff is Director of Orchestras and teaches orchestral conducting at the New England Conservatory of Music in Boston, Massachusetts.

Wolff lives in Boston with his wife, the harpist and author Judith Kogan. They have three sons.

This article uses material from the article Hugh Wolff from the free encyclopedia Wikipedia and it is licensed under the GNU Free Documentation License.