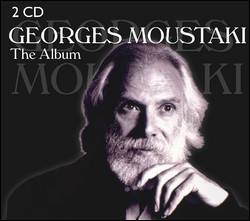 Georges Moustaki (born Giuseppe Mustacchi;[1] May 3, 1934 – May 23, 2013) was an Egyptian-French singer-songwriter of Jewish Italo-Greek origin, best known for the poetic rhythm and simplicity of the romantic songs he composed and often sang. Moustaki gave France some of its best-loved music by writing about 300 songs for some of the most popular singers in that country, such as Édith Piaf,[1] Dalida, Françoise Hardy, Yves Montand, Barbara, Brigitte Fontaine, Herbert Pagani, France Gall, Cindy Daniel, Juliette Greco, Pia Colombo, and Tino Rossi, as well as for himself.[2]

Georges Moustaki was born Giuseppe Mustacchi in Alexandria, Egypt on May 3, 1934. His parents, Sarah and Nessim Mustacchi, were Francophile, Greek Jews from the island of Corfu, Greece. They moved to Egypt, where their young child first learned French. They owned the Cité du livre – one of the finest book shops in the Middle East – in the cosmopolitan city of Alexandria where many ethnic communities lived together.[3]

Moustaki's father spoke five languages whereas his mother spoke six. The young Giuseppe and his two older sisters spoke Italian at home and Arabic in the streets.[4] The parents placed Giuseppe and his sisters in a French school where they learned to speak French.[4]

At the age of 17, after a summer holiday in Paris, Moustaki obtained his father's permission to move there, working as a door-to-door salesman of poetry books. He began playing the piano and singing in nightclubs in Paris, where he met some of the era's best-known performers. His career took off after the young singer-songwriter Georges Brassens took Moustaki under his wing. Brassens introduced him to artists and intellectuals who spent much of their time around Saint-Germain-des-Prés. Out of gratitude, Moustaki adopted the first name of the only musician he called "master".[1][2]

Moustaki was introduced to Édith Piaf in the late 1950s by a friend whose praise of the young songwriter was so flattering that Piaf, then at the peak of her fame, requested somewhat sarcastically to hear him sing his best works. "I picked up a guitar and I was lamentable. But something must have touched her. She asked me to go and see her perform that same evening at the Olympia music hall and to show her later the songs I had just massacred."[5]

He soon began writing songs for Piaf, the most famous of which, Milord, about a lower-class girl who falls in love with an upper-class British traveller, reached number one in Germany in 1960 and number 24 in the British charts the same year. It has since been performed by numerous artists, including Bobby Darin and Cher.

Piaf was captivated by Moustaki's music, as well as his great charm. Piaf liked how his musical compositions were flavored with jazz and styles that went beyond France's borders. Moustaki and Piaf became lovers and embarked on what the newspaper Libération described as a year of "devastating, mad love", with the newspapers following "the 'scandal' of the 'gigolo' and his dame day after day".[6]

After a decade of composing songs for various famous singers, Moustaki launched a successful career as a performer himself, singing in French, Italian, English, Greek, Portuguese, Arabic and Spanish.

Moustaki's songwriting career peaked in the 1960s and 1970s with songs like "Sarah", performed by Serge Reggiani, and "La Longue Dame brune", written for the singer Barbara (Monique Serf).

In 1969, Moustaki composed the song "Le Métèque" — 'métèque' is a pejorative word for a shifty-looking immigrant of Mediterranean origin — in which he described himself as a "wandering Jew" and a "Greek shepherd". Serge Reggiani rejected it and the record companies refused to produce it. Moustaki then sang it himself, on a 45rpm disc, and it became a huge hit in France, spending six non consecutive weeks at number one in the charts. "A small, subliminal settling of scores became the hymn of anti-racism and the right to be different, the cry of revolt of all minorities,” Moustaki said of the song.[2]

In 1972 Moustaki popularized the translation of two songs by Mikis Theodorakis, "l'Homme au cœur blessé" and "Nous sommes deux", the latter being a French version of Imaste dio.[7]

Moustaki's philosophy was reflected in his 1973 song "Déclaration": "I declare a permanent state of happiness and the right of everyone to every privilege. I say that suffering is a sacrilege when there are roses and white bread for everyone."[8]

In 2008, after a 50-year career during which he performed on every continent, Moustaki recorded his last album, Solitaire. On it, he recorded two songs with China Forbes.

In 2009, in a packed concert hall in Barcelona, he told the stunned audience that he was giving his last public performance as he would no longer be capable of singing because of an irreversible bronchial illness.[8]

Moustaki married Annick "Yannick" Cozannec when he was twenty years old and she was twenty-five. Their daughter, Pia, was born the following year. They lived in an apartment at rue des Deux-Ponts on the Île Saint-Louis in Paris for many years, before his lung illness forced him to leave his beloved Paris to seek out warmer and cleaner air in the French Riviera.

In his last interview given to Nice-Matin newspaper in February 2013, Moustaki said, "I regret not being able to sing in my bathroom. But singing in public, no. I've done it all.... I've witnessed magical moments."[10]

The French president, François Hollande, called Moustaki a "hugely talented artist whose popular and committed songs have marked generations of French people".[12] French Culture Minister Aurélie Filippetti hailed Moustaki as an "artist with convictions who conveyed humanist values ... and a great poet".[13] Paris Mayor Bertrand Delanoë remembered Moustaki as "a citizen of the world who was in love with liberty, a true rebel until his last days", who had given France "unforgettable compositions and lyrics". Juliette Gréco, one of France's biggest singers in the 1960s, grieved the loss of a "poet" and "unique person". "He was a fine, elegant man who was infinitely kind and talented," she told RTL radio.[14]

Moustaki was buried according to Jewish rites in a family vault at the Père Lachaise Cemetery in Paris a few meters from the grave of his former amour Édith Piaf.[9][15] [16]

All double albums except for the first one.

This article uses material from the article Georges Moustaki from the free encyclopedia Wikipedia and it is licensed under the GNU Free Documentation License.

Frédéric Chopin Nocturne Es-Dur op.9 Nr.2
Update Required To play the media you will need to either update your browser to a recent version or update your Flash plugin.