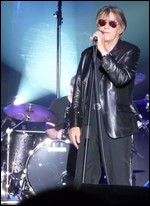 Jacques Dutronc (born 28 April 1943 in Paris; French pronunciation: [ak dyt]) is a French singer, songwriter, guitarist, composer, and actor. He has been married to singer Françoise Hardy since 30 March 1981 and the two have a son (jazz guitarist Thomas Dutronc, born 1973). He also has been a longtime songwriting collaborator with Jacques Lanzmann. Some of Dutronc best known hits include "Il Est Cinq Heures, Paris S'éveille" (a chanson tune akin to "Waterloo Sunset" by The Kinks that All Music Guide has called "his finest hour"),[1] "Le Responsable",[2] and "Les Cactus".

Dutronc played guitar in the rock group El Toro et les Cyclones. He wrote successful songs for Françoise Hardy in the 1960s before moving on to pursue a successful solo career. His music incorporated traditional French pop and French rock as well as styles such as psychedelic rock and garage rock. He later branched out into film acting, starting in 1973.[3] He earned a Cesar for Best Actor for the leading role in Van Gogh, which was directed by Maurice Pialat.[4] According to the All Music Guide, Dutronc is "one of the most popular performers in the French-speaking world",[3] although he "remains little known in English speaking territories" aside from a cult following in the U.K.[5]

Between 1963 and 1964, Dutronc played guitar for the group "El Toro et les Cyclones" with Hadi Kalafate. During this time he also appeared at Le Golf Drouot in Paris as backing guitarist for stars including Eddy Mitchell. After performing his obligatory military service, he landed a job as assistant at Vogue Records to Artistic Director Jacques Wolfsohn. In this capacity, he arranged songs for several lesser known artists such as Zou Zou and Cleo. At Vogue Records, he teamed with writer Jacques Lanzmann, then director at Lui magazine, to create songs for up-and-coming artists. One of their first commissions was for the pop singer Benjamin, however, after his first EP failed to perform, Vogue Records unceremoniously booted him from their roster. After hearing one of the demos that Dutronc had produced, Wolfsohn declared that Jacques should perform the record for release. This single, "Et moi, et moi, et moi" was released in 1966, and its popularity turned Dutronc into a star.

Dutronc's songs combine American and British musical influences with French lyrical themes. Many of his early songs feature a British garage sound comparable to that of Ray Davies of The Kinks. Dutronc's "La fille du père Noël" and David Bowie's "Jean Genie" share a riff likely derived from the Yardbirds' accelerated version of Bo Diddley's "I'm a Man" (the Belgian singer Arno Hintjens recorded a medley of the Dutronc and Bowie songs ("Jean Baltazaarr") with the American singer Beverly Jo Scott that highlight these similarities). However, Dutronc is distinctive for his mocking attitude toward late 1960s French youth culture. Dutronc's biggest hit was "Il est cinq heures, Paris s'eveille", with the classical flute player Roger Bourdin performing an essential part. In this song, Dutronc paints an evocative portrait of the French capital in the early morning hours.

Also in 1973, Dutronc began a second career as an actor in the film Antoine et Sébastien, directed by Jean-Marie Périer. In the following years, Dutronc devoted most of his energies toward his acting career. He has appeared in films directed by Andrzej Zulawski, Jean-Luc Godard, Claude Lelouch and Maurice Pialat.

In retrospect to Dutronc's early career, critic Mark Deming of the All Music Guide has remarked:

Dutronc returned to music in recent years, and also has enjoyed a resurgence of popular interest in his music. Since the early Dutronc songs had a classic late-sixties freakbeat backing (provided by session musicians), his songs were played in the hip retro clubs of the UK and US in the late 1990s, a practice which continues to this day. He is celebrated in the 1997 Cornershop song "Brimful of Asha" with the line: "Jacques Dutronc and the Bolan Boogie/The Heavy Hitters and the Chichi music."

Dutronc earned a Cesar for Best Actor for the leading role in Van Gogh, which was directed by Maurice Pialat. Critic Christopher Null of the AMC Network praised Dutronc's performance, commenting that:

Dutronc currently lives in the town of Monticello on the Mediterranean island of Corsica.

This article uses material from the article Jacques Dutronc from the free encyclopedia Wikipedia and it is licensed under the GNU Free Documentation License.

Déodat de Séverac Cantos de mariñeros aus "3 Recuerdos" für Orchester
Update Required To play the media you will need to either update your browser to a recent version or update your Flash plugin.