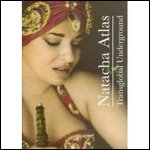 Natacha Atlas (Arabic:  ; born 20 March 1964) is a Belgian singer known for her fusion of Arabic and Western electronic music, particularly hip-hop. She once termed her music "cha'abi moderne" (modern popular music). Her music has been influenced by many styles including Arabic, hip hop, drum 'n' bass and reggae.

Atlas began her career as part of the world fusion group Transglobal Underground. In 1995, she began to focus on her solo career with the release of Diaspora. She has since released seven solo albums and been a part of numerous collaborations. Her version of "Mon Amie La Rose" became a surprise success in France, reaching 16 on the French Singles Charts in 1999. She is a Goodwill Ambassador for the United Nations Conference Against Racism.

Atlas was born to a father of Moroccan, Egyptian, and Palestinian ancestry[1] who was born in Jerusalem and a British mother who had converted to Islam. Her paternal grandfather was born in Egypt, but grew up in Palestine, immigrating to Europe at age 15.[2] She concedes to being "maybe 10 percent Jewish or something." Atlas says the claim that her father is purely Jewish and not Arab is "one of those things where someone had a grudge against me and wanted to hurt me. My grand-grand-grandfather was Jewish. But Jews have always been part of Arab society, so its not so unusual for someone to find out that they have Jewish blood. At the end of the day, we really are so connected."[3]

Atlas grew up in Laken, a Moroccan suburb of Brussels, Belgium, After her parents separated, Atlas went to live in Northampton, England with her mother.[4] Atlas learned several languages, including Arabic, French, English, and Spanish,[5] and has used them all in the course of her career.

Atlas returned to Belgium at age 24 and began her career with two jobs as a belly dancer and the lead singer of a Belgian salsa band. In 1991, she recorded the track "Timbal" with Balearic Beat on the album ¡Loca!. Atlas also worked with Jah Wobble composing five tracks for the LP Rising above Bedlam. Through the recording of ¡Loca!, Atlas met British labelmates Transglobal Underground (TGU), who at the time had a Top 40 hit, "Templehead". She became the lead singer and belly dancer for the group, which focused on mixing Eastern and Western sounds as well as other styles.

Most of Atlas' albums have been produced by TGU. She continues to focus on her Middle Eastern roots, as the titles of her albums imply: Diaspora (1995), Halim (1997) (in honour of Egyptian singer Abdel Halim Hafez), Gedida (1998) and Ayeshteni (2001).

2000 saw her collaborate with Jean Michel Jarre for the track "C'est La Vie" on his album Métamorphoses. The track was released as a single.

Due to her French-language tracks, Atlas is now quite popular in France. In the U.K., on the other hand, she has not experienced the same amount of success. She is not very happy about the way her music is perceived in the UK: "Someone from the New Musical Express rang us about a feature we're to do with them and said 'We don't want it to be about the multi-cultural angle'. In other words that fad is over. And I'm personally insulted... what other... angle is there for us? I get sick of it all."[6]

In 2003, Atlas provided vocals for the Kolo folk dance song "'Ajde Jano" on Nigel Kennedy and Kroke's album, East Meets East.[7][8] In 2005, Atlas contributed the song "Just Like A Dream" (from Something Dangerous) to the charity album Voyces United for UNHCR.

Her music has been used in a number of soundtracks. Her song "Kidda" was featured on the Sex and the City 2 soundtrack[9] and in the 2005 video game Grand Theft Auto: Liberty City Stories on Radio del Mundo. Additionally, her song "Bathaddak" is one of the songs included in the 2007 Xbox 360 exclusive video game Project Gotham Racing 4.

Atlas was originally billed to star in and provide the soundtrack to the film Whatever Lola Wants, directed by Nabil Ayouch. However, shooting delays caused Atlas to only be involved in the film's soundtrack. Her song "Gafsa" (Halim, 1997) was used as the main soundtrack during the Korean film Bin-Jip (also known as 3-Iron) (2004) by Kim Ki-Duk. She participated in the piece "Light of Life (Ibelin Reprise)" for the soundtrack of Ridley Scott's Kingdom of Heaven.

The 2007 film Brick Lane features four songs with vocals by Atlas, "Adam's Lullaby", "Running Through the Night", "Love Blossoms" and "Rite of Passage". On 23 May 2008 Atlas released a new album, Ana Hina,[10] which was well-received by critics.[11][12] In 2008, two of Atlas' songs, "Kidda" and "Ghanwa Bossanova", were used in Shamim Sarif's romantic comedy about two women, I Can't Think Straight.

On 20 September 2010 Atlas released her newest album, Mounqaliba. Co-produced by Samy Bishai, it explores the more classical world. It is inspired by the poems of Indian poet Rabindranath Tagore.[13] She is also composing the music for Francoise Charpat's upcoming film.[14]

In 1999, Atlas married Syrian kanun player Abdullah Chhadeh.[15] The couple divorced in 2005.[16] Atlas is now in a relationship with British Egyptian violinist Samy Bishai.[17] The couple divides their time between London and Condom, France.[14]

Atlas has said in the past that she is "technically Muslim" and that she identifies with Sufism,[16] but says that "these days I prefer to say that I'm Anglo-Middle Eastern and leave the religion out of it."[17] She is, however, open to other forms of spirituality because "it's important to be tolerant".[18]

In 2001, she was appointed by Mary Robinson as a Goodwill Ambassador for the United Nations Conference Against Racism.[19] Robinson chose Atlas because "she embodies the message that there is a strength in diversity. That our differences be they ethnic, racial or religious are a source of riches to be embraced rather than feared".[20]

Atlas uses her multi-ethnic background when singing lyrics that often are intertwined with phrases from the Quran. She personally calls herself a "human Gaza Strip", reflecting her diverse Judaeo-Islamic background and thoughts relating to the Muslim and Jewish world.[4] In her music, Atlas makes many political statements regarding Islam and Judaism and often takes a middle ground approach advocating for peace and harmony. For example, her lyrics say "Why are we fighting/When were all together/Lets return to peace/Lets make peace, we are brothers" (from her song "Laysh Nataarak").

During an interview with Muslim Wake Up! online magazine, Atlas talked about her identification with her European and Arabic roots by saying "There will always be two identities living within me: Arabic and European. When I was very young, I tried to ignore the Arabic side, my fathers side, because I saw it as foreign. But something happened in my late teens. I was at a nightclub in Brussels and I heard Arabic music, and I knew then that there was something inside of me that I wanted to go back to. So I ended up going to the other extreme. But as you mature, you realize that you have both inside you. Thats how God made me. These days I dream in two languages, and not a day goes by when I dont end up using Arabic".[21]

This article uses material from the article Natacha Atlas from the free encyclopedia Wikipedia and it is licensed under the GNU Free Documentation License.