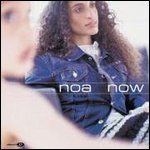 Achinoam Nini (Hebrew: ; Ainóam Nini; born June 23, 1969; known outside of Israel as Noa), is an Israeli singer.[1] She is accompanied by guitarist Gil Dor and often plays the conga drum as she sings.[2] Nini represented Israel at the Eurovision Song Contest in 2009.

Achinoam Nini was born in Bat-Yam to a Yemeni-Jewish family. She lived in New York City from age 2.[3] She attended SAR Academy and the Rabbi Joseph H. Lookstein Upper School of Ramaz High School, and remained in New York until her return to Israel alone at the age of 16.[4] After serving the mandatory two years in the Israeli Army in a military entertainment unit, , Noa studied music at the Rimon School of Jazz and Contemporary Music in Ramat Hasharon, where she met her long-time partner and collaborator Gil Dor. She is married to Asher Barak, a pediatrician. They have three children, Ayehli, Eyneha and Yum.

Noa has performed in Carnegie Hall and Avery Fisher Hall in New York City, Olympia in Paris, Rome's Colosseum, The Barbican in London, Zellerbach Auditorium in San Francisco, the Ravinia Festival in Chicago, the Montreux Jazz Festival and Paleo Music festival in Switzerland, Palau de la Musica in Barcelona, the North Sea Jazz Festival and Carre Auditorium in the Netherlands and the Stockholm Water Festival in Sweden, as well as numerous successful tours of major venues and festivals throughout Europe, the USA, Canada, Brazil and Japan.

Noa and Gil Dor have had various ensembles since their early days as an acoustic duet but their most long lived musical relationship has been with the noted percussionist Zohar Fresco. The three have played hundreds of concerts together all over the world. The ensembles vary from album to album ranging from rhythm section through Solis String Quartet and up to symphonic tours.

Noa's music is most prominently influenced by the singer-songwriters of the 60s, such as Paul Simon, Joni Mitchell, Leonard Cohen, and James Taylor. These musical and lyrical sensibilities, combined with Noa's Yemenite roots and Gil Dor's strong background in jazz, classical, country and rock, have created Noa and Gil Dor's unique sound, manifested in hundreds of songs written and performed together. Noa plays percussion, guitar and piano.

In 1994, Noa performed the English version of Ave Maria for a live audience of 100,000 and a TV audience of millions at the culmination event of the International Year of the Family at the Vatican, Rome, Italy, witnessed by Pope John Paul II.

Noa and Gil Dor have performed on numerous occasions with the Israel Philharmonic Orchestra. They recorded an album with them during a live performance at Tel Aviv's Mann auditorium in 1997. Over the years their symphonic projects have multiplied, including concerts with Symphony Orchestras from Lille, Messina, Parma, Murcia, Firenze Symphony.

In September 2003, Noa performed a vocal work entitled L'isola della Luce (after the Greek island on which it was performed) written by Nicola Piovani especially for her. The work was commissioned by the Cultural Olympics Committee in Athens.

On May 1, 2004, Noa and Gil Dor, together with the noted Israeli rhythm and dance troupe Mayumana, gave a joint performance between the two final games of the Euroleague basketball championship, broadcast to thousands of television viewers around the world.

Together with Arab-Israeli singer Mira Awad, represented her country at Eurovision Song Contest 2009 with the song There Must Be Another Way, qualifying to the final from the first semi final and eventually finishing in 16th place.[5]

In 1998, Noa recorded the part of Esmeralda in French for the original soundtrack of the multi-Platinum selling "Notre Dame de Paris", but decided not to play the role in the musical on stage. Her song "Babel", written in English, French and Hebrew as theme song for the Gerarad Pullicino movie of the same name, topped the charts in France the following year.

Noa collaborated with French composer Éric Serra on two songs for film: "The Experience of Love" from the James Bond film GoldenEye, and the song "My Heart is Calling" from the Luc Besson film "The Messenger."

In 2000, Noa recorded the theme song of "Life Is Beautiful", Roberto Benigni's Oscar award-winning film. Noa also wrote the lyrics to the song, together with Gil Dor. The song was recorded and released with the album "Blue Touches Blue", and also appears on the soundtrack to the film as well as on her album "Gold" in two versions.

Noa is a peace activist. She supported Tzipi Livni during Israel's legislative elections in 2013.[10]

This article uses material from the article Achinoam Nini from the free encyclopedia Wikipedia and it is licensed under the GNU Free Documentation License.