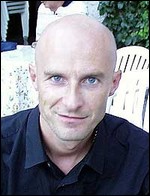 Not to be confused with M (band).

M People are an English house music band which formed in 1990 and achieved success throughout most of the 1990s.[1] The name M People is from the initials of Mike Pickering,[2] who formed the group.

Pickering had been a member of Factory Records dance act Quando Quango, but became more noted as one of the original DJs at The Haçienda. Paul Heard was a member of acid jazz band, Ace of Clubs and Shovell had previously been in the collective Natural Life. The original plan had been to have a roster of different singers for different songs but having been spotted by Pickering and Heard, Heather Small became the distinctive vocalist of the group. She had been in the English soul band Hot House, which had released a number of critically acclaimed records without scoring any major success.

Their first release came in the form of "Colour My Life", a limited white label pressing which got them some recognition, but it was the first official single "How Can I Love You More?" that gave them their first Top 30 hit and a following in and around the Manchester club scene, where Pickering was still DJ-ing. Their first album, Northern Soul, provided other singles, including a full release of "Colour My Life", "Someday" and "Excited", followed by a re-release and repackaging of the album.

1993 started with the re-released and remixed single from 1991's "How Can I Love You More?" which was released at the end of January and provided the band with their first Top 10 single, peaking at number 8. While this single was in the chart the band were working on new material for the second album to be released that autumn; a preliminary single, "One Night in Heaven" was released in the summer and peaked at number 6. It provided them with a dance/pop success that set up a bigger worldwide hit with the second single, "Moving on Up". The album Elegant Slumming went into the Top 5 on release and peaked at #2, remaining on the chart until the following summer and later winning the band a Mercury Music Prize. A further two Top 10 singles followed: "Don't Look Any Further" (a cover of the Dennis Edwards song) in December, and "Renaissance" which was used as the theme tune to the BBC 2 show, The Living Soap, sending the single to number 5 in the UK Singles Chart.

In 1994 and 1995 M People won the BRIT Award for Best British Dance Act, the latter as a result of the release of Bizarre Fruit. The first single from that album was "Sight for Sore Eyes" which climbed to number 6, helping the album to enter the UK Albums Chart and peak at #4 and stay in the Top 10 for four months into the following year. The second single from the album was "Open Your Heart", which became their seventh consecutive Top Ten hit in two years and at the Brit Awards '95 they collaborated with Sting on his track "If You Love Somebody Set Them Free". Their third single "Search for the Hero" was later used in the TV advertising campaign for the Peugeot 406. The song got to number 9 in the chart.

In 1995, the band embarked on their first world tour entitled the Come Again Tour and two more singles were lifted from a re-issued album: Bizarre Fruit II which charted and peaked one place higher at number 3; these singles were a remixed "Love Rendezvous" and "Itchycoo Park". The former was the least successful single from the album charting at number 32, and the latter was a cover of The Small Faces 1967 single, charting at number 11.

In the United States, their biggest success was on the Hot Dance Music/Club Play chart, where they achieved five Top 5 singles, four of which hit number one.

After touring and promotion of Bizarre Fruit II for 18 months the band took a break in 1996. The album, having been released in November 1995, did not leave the chart until April 1997, becoming one of the biggest selling albums of the decade. They made some outdoor live UK performances called the Summer M Parties in June 1996, at Crystal Palace, Alton Towers plus a televised performance on BBC 1 on 29 June 1996 from Old Trafford, Manchester for The Crowd are on the Pitch: The Euro '96 Extravanganza, where they performed along with bands Dodgy, Madness and fellow Mancunians Simply Red and comedians Nick Hancock and Jo Brand to a crowd of 60,000 at party celebrating the Euro 1996 football championships.

In March 1997, lead singer Heather Small gave birth to her son. With the closure by BMG of the deConstruction label in 1996, the band founded their own record label, M People Records, to release the forthcoming album. In September they released the lead single "Just for You" which peaked at number 8 on the chart and two weeks later, their album Fresco was released and went in the UK Albums Chart at number two, going on to sell 1.1 million copies and certified platinum. The band achieved their third multi-platinum selling album and this time appeared on Jools Holland's BBC 2 show, performing album tracks "Never Mind Love", "Angel St" and Small also performed, solo, the million-selling charity single that she appeared on, "Perfect Day".

Fresco also bore the hit single, "Fantasy Island" (number 33) and went on a fifteen-date UK Tour supporting the album to rave reviews. The final single lifted off the album was Angel St which got to number 8 and earned them their tenth Top 10 chart hit in March 1998, making the band one of the most consistent hit-makers of the 1990s on both sales and airplay.

During the summer of 1998, the band prepared for their fifth album, a compilation entitled The Best of M People which also contained three new tracks: "Testify", "Dreaming" and a cover of the Doobie Brothers classic: "What a Fool Believes". The album went on to sell 1.75 million, peaked at number 2 and was certified 3x platinum. Of the three new tracks, "Testify" and "Dreaming" were released as singles. "Testify" got to number 12 in October 1998 and "Dreaming" got to number 13 in February 1999, their eighteenth and final single to date.

After the release of The Best of M People, the band took an extended hiatus. Heather Small recorded a solo album: Proud, and it seemed that the band had split. However, a re-packaged Greatest Hits album was called Ultimate Collection released in 2005, and the band also embarked on a short tour of the UK. Small continued to pursue a solo career, as her song "Proud", was the soundtrack to the successful London 2012 Olympic bid.

M People toured once again in 2007 as part of the Forestry Commissions 2007 Forest Tours at Delamere Forest, Cheshire; Dalby Forest, North Yorkshire Moors; Thetford Forest, Suffolk and Westonbirt Arboretum, Wiltshire to support The Forestry Commissions social and environmental programmes. Small said: "We have played in many different locations but never in forests so were really looking forward to doing these gigs".[3][4] In addition to these gigs M People performed at the Hampton Court Festival in Surrey, London on 12 June 2007, and the Chichester Real Ale and Jazz festival on 4 July 2007.[5] Elsewhere, they played a concert in Warsaw, Poland on 7 September 2007.[6] The band also played some festival dates in 2008 before Small starred as a contestant in that year's BBC1's Strictly Come Dancing in the UK.

In 2012, as part of a series of Summer Concerts in Kew Gardens from 38 July, M People were one of 5 acts performing live on each day of the five days. The other acts included Status Quo, Will Young, James Morrison and the Gipsy Kings. M People performed a 60 minute set on Wednesday 4 July supported by Chic featuring Nile Rodgers.

On 23 April 2013, it was announced that the band will undertake an extensive 14 date Greatest hits tour to mark 20 years since the release of the Mercury Music Prize-winning album Elegant Slumming. This is the band's first UK Tour since 2005's Ultimate Collection Tour. Pickering does not take part in this tour.

The dates for the UK tour are as follows:

Studio albumsCompilations and other albums

This article uses material from the article M People from the free encyclopedia Wikipedia and it is licensed under the GNU Free Documentation License.

Carl Stamitz 1. Satz aus dem Konzert für Bratsche und Orchester D-Dur op. 1
Update Required To play the media you will need to either update your browser to a recent version or update your Flash plugin.