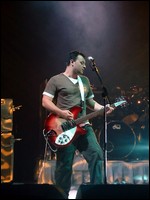 James Dean Bradfield (born 21 February 1969) is a Welsh singer-songwriter, musician and record producer. He is known for being the lead guitarist and lead vocalist for the Welsh alternative rock band Manic Street Preachers.

Born in Pontypool, Torfaen, Bradfield attended the local Oakdale Comprehensive School where he suffered years of cruelty and bullying (he claims he was "a Woody Allen-esque little nerd") for his name (nicknamed Crossfire), lazy eye, musical bent and small size. James formed a close relationship with three friends: his cousin Sean Moore, who lived with James and his family throughout their childhood after his own parents' divorce, and future bandmates Nicky Wire and Richey Edwards.

Bradfield loved to run and was a steeple-chaser, and soon grew fond of famous punk rock band The Clash. He gave up his dream of "being like Napoleon" and decided that he wanted to be a rock star. He learnt to play guitar by learning how to play Guns N' Roses's Appetite for Destruction with the curtains drawn in his parents' front room.

Late April 2006, a track from Bradfield's debut solo single entitled "That's No Way to Tell a Lie" premiered on Janice Long's show on Radio 2. It became the first single from the album and was released on 10 July while the album, entitled "The Great Western", was released on 24 July. The single debuted at #18 in the UK single charts while the album debuted at #22 on the album charts. The positions were considered relatively successful considering the lack of promotion.

In support of the album, Bradfield played a series of solo gigs in May 2006 in Manchester, Glasgow, Dundee, Birmingham and London. The setlists consisted of tracks from the "The Great Western" as well as several Manics tracks including "This Is Yesterday" and "Ocean Spray". He has also played one further date in London ULU in June 2006, featuring a similar setlist to the other gigs. Bradfield also performed at the 2006 V Festival in late August. He embarked on his first full UK tour consisting of 15 dates in October. A second single, 'An English Gentleman' was lifted from "The Great Western" prior to the tour and entered the UK chart at #31 on 1 October 2006.

He currently lives in Chiswick, London, but also has a house in the dock area of Cardiff. Despite having said I always get bored of the company of women really quickly,[1] he married the band's PR agent Mylène Halsall in a ceremony in Florence, Italy on 11 July 2004. The couple have one child, a daughter, who was born in 2011. He is a supporter of Cardiff Blues and Nottingham Forest.[2]

This article uses material from the article James Dean Bradfield from the free encyclopedia Wikipedia and it is licensed under the GNU Free Documentation License.