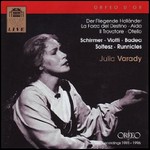 At the age of six she began violin lessons at the music conservatory in Cluj-Napoca and then, aged fourteen, voice training with Emilia Popp. She later studied voice with Arta Florescu in Bucharest.

She made her debut, as a mezzo-soprano, with the Cluj Opera in 1962, singing in Gluck's Orfeo and as Fiordiligi in Mozart's Così fan tutte.

In 1970 she joined the Frankfurt-am-Main Opera and thereafter sang mostly in Western Europe. In 1973 she moved from Frankfurt to the Bayerische Staatsoper (the Bavarian State Opera) in Munich and later joined the Deutsche Oper Berlin. She has appeared at the Royal Opera House, Covent Garden, London; at the Vienna State Opera; at the Metropolitan Opera in New York; at the Teatro alla Scala in Milan; at the Teatro Colón in Buenos Aires; at the Opéra Bastille in Paris and at the Salzburg, Munich and Edinburgh festivals. In 1978 she created the role of Cordelia at the premiere of Aribert Reimann's opera Lear with the Bayerische Staatsoper.

In 1977 she married baritone Dietrich Fischer-Dieskau. In 1998 she retired from opera. She is currently a guest professor at the Hochschule für Musik Hanns Eisler in Berlin.

Here are most of the roles Julia Varady sang and played in staged opera performances. Roles she sang in the studio (such as the Empress in Strauss' Die Frau ohne Schatten) or in concert (such as Leonore in Beethoven's Fidelio) are not yet included.

This article uses material from the article Julia Varady from the free encyclopedia Wikipedia and it is licensed under the GNU Free Documentation License.