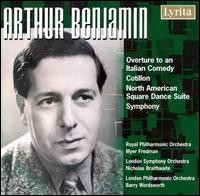 Arthur Leslie Benjamin (18 September 1893, in Sydney – 10 April 1960, in London) was an Australian composer, pianist, conductor and teacher. He is best known as the composer of Jamaican Rumba (1938) and of the Storm Clouds Cantata, featured in both versions of the Alfred Hitchcock film The Man who Knew Too Much (1934), (1956).

Arthur Benjamin was born in Sydney on 18 September 1893 into a Jewish family, although he was a non-practicing Jew.[1] His parents moved to Brisbane when Arthur was three years old. At the age of six, he made his first public appearance as a pianist and his formal musical training began three years later with George Sampson, the Organist of St John's Cathedral and Brisbane City Organist. In 1911, Benjamin won a scholarship from Brisbane Grammar School to the Royal College of Music (RCM), where he studied composition with Charles Villiers Stanford, harmony and counterpoint with Thomas Dunhill, and piano with Frederic Cliffe.[2]

In 1914 he joined the Officer Training Corps, receiving a temporary commission in April 1915. He served initially in the infantry as 2nd Lieutenant with the 32nd Battalion of the Royal Fusiliers and in November 1917 he was attached to the Royal Flying Corps. On 31 July 1918 his aircraft was shot down over Germany by the young Hermann Göring, and he spent the remainder of the war as a German prisoner of war at Ruhleben internment camp near Berlin. There he met the composer Edgar Bainton, who had been interned since 1914, and who was later to become director of the New South Wales State Conservatorium of Music.

The manuscript of the unpublished Violin Sonata in E minor bears the date 1918, the only surviving work of that year and one of very few to be written by Benjamin during the war.

He returned to Australia in 1919 and became piano professor at the NSW State Conservatorium of Music, Sydney. He returned to England in 1921 to become piano professor at the RCM. Following his appointment in 1926 to a professorship which he held for the next thirteen years at the RCM, Benjamin developed a distinguished career as a piano teacher. His better-known students from that era include Muir Mathieson, Peggy Glanville-Hicks, Miriam Hyde, Joan Trimble, Stanley Bate, Bernard Stevens, Lamar Crowson, Alun Hoddinott, Dorian Le Gallienne, Natasha Litvin (later Stephen Spender's wife and a prominent concert pianist), William Blezard[3] and Benjamin Britten, whose Holiday Diary suite for solo piano is dedicated to Benjamin and mimics many of his teacher's mannerisms. See: List of music students by teacher: A to B#Arthur Benjamin.

He was also an adjudicator and examiner for the Associated Board of the Royal Schools of Music, which led him to places such as Australia, Canada and the West Indies. It was in the West Indies that he discovered the native tune (Mango Walk) on which he based his best-known piece, Jamaican Rumba, one of Two Jamaican Pieces, composed in 1938, for which the Jamaican government gave him a free barrel of rum a year as thanks for making their country known.[4]

The Violin Concerto of 1932 was premiered by Antonio Brosa with Benjamin conducting the BBC Symphony Orchestra. In 1935 he accompanied the 10-year-old Canadian cellist Lorne Munroe on a concert tour of Europe. Three years later he wrote a Sonatina for Munroe, who later became the principal cellist with the Philadelphia Orchestra and the New York Philharmonic, and also recorded the piece.

His Romantic Fantasy for Violin, Viola and Orchestra was premiered by Eda Kersey and Bernard Shore in 1938, under the composer.[5] Its first recording was by Jascha Heifetz and William Primrose.

He resigned from his post at the RCM and left to settle in Vancouver, British Columbia, Canada, where he remained for the duration of the war. In 1941 he was appointed conductor of the newly formed CBC Symphony Orchestra, holding the post until 1946. During this time he gave "literally hundreds" of Canadian first performances.[6] After a series of radio talks and concerts in addition to music teaching, conducting and composing, he became a major figure in Canadian musical life. He frequently visited the United States, broadcasting and arranging many performances of contemporary British music. He was also Resident Lecturer at Reed College, Portland, Oregon between 1944 and 1945. Notable students include composer Pamela Harrison.

The Elegiac Mazurka of 1941 was commissioned as part of the memorial volume 'Homage to Paderewski' in honour of the Polish pianist who had died that year. In 1945 a shortened piano solo arrangement of the Jamaican Rumba was published.

The other major original works written during the 1950s were the Harmonica Concerto (1953), written for Larry Adler, who performed it many times and recorded it at least twice; the ballet Orlando's Silver Wedding (1951), Tombeau de Ravel for clarinet and piano, a second string quartet (1959) and the Wind Quintet (1960). He had a lasting admiration for Maurice Ravel, whose influence is most obvious in Tombeau de Ravel and the much earlier Suite of 1926 for piano solo.

He was honoured by the Worshipful Company of Musicians by the award of the Cobbett Medal later that year (1957).

Arthur Benjamin died on 10 April 1960, at the age of 66, at the Middlesex Hospital, London, from a re-occurrence of the cancer that had first attacked him three years earlier. An alternative explanation of the immediate cause of death is hepatitis, contracted while Benjamin and his partner, Jack Henderson,[7][8] a Canadian who worked in the music publishing business,[9] were holidaying with the Australian painter Donald Friend in Ceylon (now Sri Lanka).

Benjamin wrote four operas. The one-act opera The Devil Take Her, to a libretto by Alan Collard and John B. Gordon, was first produced at the RCM on 1 December 1931, conducted by Sir Thomas Beecham. Another one-acter, Prima Donna (1932) had to wait until 23 February 1949 for its premiere, at the Fortune Theatre in London. Its libretto was by Cedric Cliffe, son of Benjamin's piano teacher at the RCM, Frederic Cliffe.

A Tale of Two Cities (1950), and Mañana were full-length operas. The librettist for the former was again Cedric Cliffe. First produced by Dennis Arundell during the Festival of Britain in 1951, it won a gold medal and was later broadcast in a live performance by BBC Radio 3 on 17 April 1953. After this performance, Benjamin revised the piece into its final version. The opera was successfully produced in this form in San Francisco in April 1960, only days before his death. Mañana was commissioned in 1955 and produced by BBC television on 1 February 1956. Unfortunately, it was judged a flop at the time and never revived.

A fifth opera, Tartuffe, with a libretto by Cedric Cliffe based on Molière, was unfinished at Benjamin's death. The scoring was completed by the composer Alan Boustead and the work produced by the New Opera Company at Sadler's Wells on 30 November 1964, conducted by Boustead. This appears to have been this opera's only performance.

Benjamin was equally active as a writer of music for films, beginning in 1934 with The Scarlet Pimpernel, an adaptation of music from the Napoleonic era, and Alfred Hitchcock's The Man Who Knew Too Much (1934, remade 1956), for which Benjamin composed the Storm Clouds Cantata. Other scores included those for Alexander Korda's 1947 film of An Ideal Husband, The Conquest of Everest, The Cumberland Story (1947), Steps of the Ballet (British Council/Central Office of Information 1948), Master of Bankdam (Holbein Films 1947), Above Us the Waves (1955) and Fire Down Below (1957). While most of his music scores are archived in the British Library, his film scores are completely lost. Apart from the Boosey & Hawkes edition of An Ideal Husband the only surviving score is the Storm Clouds Cantata.

Arthur Benjamin gave a number of important premieres including:

Tributes from other composers

Herbert Howells wrote an orchestral suite The Bs, in five movements, each celebrating a close friend. The work was first performed in 1914, and ends with an heraldic march movement entitled "Benjee", saluting Arthur Benjamin, who the previous year had given the premiere of Howells' Piano Concerto No. 1. Howells' orchestral piece Procession (written for the 1922 Proms) is dedicated to Benjamin. Benjamin, in turn, later dedicated the three-page Saxophone Blues (1929) to Howells.

The Australian pianist and composer Ian Munro, who has a special affinity with Arthur Benjamin and has recorded many of his piano works, has written a small biography of Benjamin.[10]

This article uses material from the article Arthur Benjamin from the free encyclopedia Wikipedia and it is licensed under the GNU Free Documentation License.