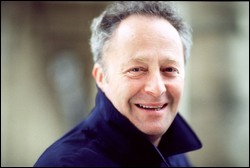 Emmanuel Krivine (born 7 May 1947, Grenoble) is a French conductor, the son of a Polish mother and a Russian father. He studied the violin as a youth and was a winner of the Premier Prix at the Paris Conservatoire, at age 16.[1] He later studied at the Queen Elisabeth School in Brussels. He stopped playing the violin after a car accident in 1981.[1]

In 2004, Krivine established the orchestra La Chambre Philharmonique. In 2006, he became music director of the Luxembourg Philharmonic Orchestra (OPL), with an initial contract of 3 years, after becoming the orchestra's principal guest conductor in 2002.[2] In May 2009, Krivine extended his contract with the orchestra through the 2014-2015 season.[3] He concluded his tenure as the OPL's music director at the end of the 2014-2015 season.[4][5] In 2013, he became principal guest conductor of the Barcelona Symphony and Catalonia National Orchestra, with a contract through the 2015-2016 season. In May 2014, Krivine was named the next principal guest conductor of the Scottish Chamber Orchestra, effective September 2015, for an initial period of 4 years.[6][1] In June 2016, the Orchestre National de France announced the appointment of Krivine as its next music director, effective with the 2017-2018 season, with an initial contract of 3 years. He holds the title of music director-designate (directeur musical désigné) for the 2016-2017 season.[7]

This article uses material from the article Emmanuel Krivine from the free encyclopedia Wikipedia and it is licensed under the GNU Free Documentation License.