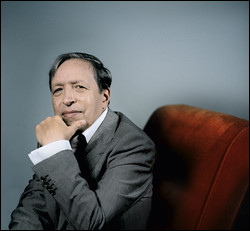 Murray Perahia was born in the Bronx borough of New York City to a family of Sephardi Jewish origin.[1] According to the biography on his Mozart piano sonatas CD, his first language was Judaeo-Spanish, or Ladino. The family came from Thessaloniki, Greece. His father moved to the United States in 1935.[1]

Perahia began studying the piano at age four with a teacher he says was "very limiting" because she made him play a single piece until it was perfect. He says his musical interests blossomed at age 15 for reasons he can't explain, and he began to practice seriously.[2] At 17, Perahia attended Mannes College, where he studied keyboard, conducting, and composition with his teacher and mentor Mieczysław Horszowski. During the summer, he also attended the Marlboro Music School and Festival, where he studied with musicians Rudolf Serkin, Alexander Schneider, and Pablo Casals, among others. He played duets for piano four hands with Serkin, who later made Perahia his assistant at the Curtis Institute in Philadelphia, a position he held for over a year.

In 1965, Perahia won the Young Concert Artists International Auditions. In 1972, he was the first North American to win first prize at the Leeds Piano Competition, helping to cement its reputation for advancing the careers of young pianistic talent.[3] Dame Fanny Waterman has said (in Wendy Thompson's book Piano Competition: The Story of the Leeds) that Mieczysław Horszowski had phoned her prior to the competition, announcing that he would be the winner.

In 1973, he worked with Benjamin Britten and Peter Pears at the Aldeburgh Festival, and with fellow pianist Radu Lupu. He was co-artistic director of the Festival from 1981 to 1989.[4]

In the 1980s, Perahia was invited to work with Vladimir Horowitz, an admirer of his art. Perahia says this had a defining influence on his pianism.[4] He became close to Horowitz, whom he visited during the elder pianist's last four years to play for him.

From 1973 - 2010, Perahia recorded exclusively for Columbia Masterworks, now Sony Classical. His first major recording project was Mozart's 27 piano concertos, conducted from the keyboard with the English Chamber Orchestra. In the 1980s, he also recorded Beethoven's five piano concertos, with Bernard Haitink and the Royal Concertgebouw Orchestra. In 2016, Perahia signed with Deutsche Grammophon.[5]

Perahia resides in London. He is married and the father of two adult children.[6]

In 1990, Perahia suffered a cut to his right thumb, which became septic. He took antibiotics for this condition, but they affected his health.[2] In 1992, his career was threatened by a bone abnormality in his hand causing inflammation requiring several years away from the keyboard, and a series of operations. During that time, he says, he found solace through studying the music of Johann Sebastian Bach. After recovering, he produced a series of award-winning recordings of Bach's keyboard works in the late 1990s, including a notable rendition of the Goldberg Variations.

In early 2005, Perahia's hand problem recurred, prompting him to withdraw from the concert stage on the advice of his doctors. He cancelled several appearances at Barbican Centre, as well as a 10-city national tour of the United States, but returned with recitals in German cities in 2006 and at the Barbican in April 2007.

In autumn of 2007, he completed a 10-city tour of the United States. Owing to his hand problem, and on the advice of his doctor, Perahia cancelled a February 2008 solo recital at Barbican Centre[7] and a tour in the United States with the Academy of St. Martin in the Fields (March and April 2008).[8] He returned to the platform in August 2008, touring with the Royal Concertgebouw Orchestra under the direction of Bernard Haitink, and had an Asian recital tour in October and November.

Besides his solo career, he is active in chamber music and appeared regularly with the Guarneri and Budapest String Quartets. He is also Principal Guest Conductor of the Academy of St Martin in the Fields, with which he records and performs.[10]

Since his return at the 2008 Proms season, Perahia has been continually active on the concert scene.

Perahia appeared on Sir Neville Marriner's 90th birthday concert on April 1, 2014, playing Mozart's Piano Concerto No. 20 in D minor, K 466 alongside the Academy of St Martin in the Fields conducted by Marriner.[11][12]

After 43 years (1973-2016) with Sony Classical (and its predecessor, Columbia Masterworks), Perahia has signed with the German label Deutsche Grammophon. His first release for the label, Bach's French Suites, came out in October 2016.

Perahia threw himself into everything with a ferocious concentration. The opening left-hand leap to the fugue's landing on a triumphant final cadence 40 minutes later felt like a single gesture, a life passing by during a fall and safe landing off a cliff. The epic Adagio was exceptional. Beethoven is in a black mood. The twisted harmonies and endless melodic lines keep shifting, trying to go one way and then the next, never finding resolution or solace. For Perahia this was inescapable pain, but not to be dwelt upon. His ability to find the life in each note proved intensely moving.[13]

In January 2009, Murray Perahia was appointed president of the Jerusalem Music Center established by violinist Isaac Stern.[1] In an interview with Haaretz newspaper he said: "Music represents an ideal world where all dissonances resolve, where all modulations —that are journeys— return home, and where surprise and stability coexist."[1]

On March 8, 2004, Queen Elizabeth II made him an honorary Knight Commander of the Order of the British Empire. (This entitles him to use the post-nominal letters KBE, but not to the title "Sir".)

In 2012 he was voted into the inaugural Gramophone Hall of Fame.[15]

In 2012 he was awarded the Jean Gimbel Lane Prize in Piano Performance from Northwestern University.

In 2015 he was awarded the Wolf Prize in Arts (with Jessye Norman).

This article uses material from the article Murray Perahia from the free encyclopedia Wikipedia and it is licensed under the GNU Free Documentation License.