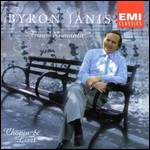 Byron Janis (born March 24, 1928) is an American classical pianist. He made several recordings for RCA Victor and Mercury Records, and occupies two volumes of the Philips series Great Pianists of the 20th Century. His discography covers repertoire from Beethoven to David W. Guion and includes major piano concertos from Mozart to Rachmaninoff and Prokofiev. His pianism has been described as combining a Horowitzian technique with a sublime musicality akin to Cortot's. He has a special affinity for Chopin and made a French film on him that was shown around the world.

Janis was born Byron Yanks (a shortened form of his family's name, Yankilevich)[1] in McKeesport, Pennsylvania, to Jewish parents of Russian and Polish descent.

He had his first piano lesson at age 4 with Abraham Litow, who had studied at the prestigious Music Conservatory in Leningrad (St. Petersburg). Janis studied with Litow until he was 7.[2] The pedagogue Selmar Janson had offered Janis a scholarship at Carnegie-Tech University in Pittsburgh, where he had many relatives, but his mother insisted, over the objections of the rest of his family, that he be sent to New York.[3]

He studied with Josef and Rosina Lhévinne, and received musical influences from Rachmaninoff and Alfred Cortot. At 10, Janis lost sensation in a finger due to an accident but this did not prevent his debut in 1943, playing Rachmaninoff's Piano Concerto No. 2 in New York. When Janis was 16, Vladimir Horowitz heard his performance of the same concerto with the Pittsburgh Symphony conducted by 15-year-old Lorin Maazel and invited Janis to work with him. Janis studied with Horowitz for four years. He remained a close friend and one of only three students ever acknowledged by Horowitz — the other two being Gary Graffman and Ronald Turini.

In 1960, he was selected as the first American to be sent to the Soviet Union, and his performance opened the successful exchange between the cold war adversaries. This was the first of his many world tours, on which he premiered many works and performed breathtakingly challenging piano-concerto programs. In 1967, he accidentally unearthed two previously unknown manuscripts of Chopin waltzes in France — this was considered "the most dramatic musical discovery of our age".[4]

Janis was honored by several U.S. Presidents and in 1984, at a State Dinner at the White House in his honor at the invitation of President Ronald Reagan, he revealed that he had been suffering from severe arthritis throughout much of his decades-long career. The painful and crippling condition eventually required surgery on his hands. However, he recovered sufficiently to resume performing.

He has received a host of the most prestigious honors each of which had not previously been conferred on an American, including the Commandeur de la Légion d'Honneur and Commandeur des Arts et des Lettres (France’s highest decorations), the Grand Prix du Disque and Cannes Classical Award (both for his Mercury Records recording of Rachmaninoff's Piano Concerto No. 1 and Prokofiev's Piano Concerto No. 3 accompanied by the Moscow Philharmonic Orchestra under Kirill Kondrashin), and the Harriet Cohen International Music Award and Beethoven Medal (for his performance of Beethoven sonatas).

Janis is the first pianist to receive the V.E.R.A. (Voice Education Research Award) Award on June 1, 2012, for his contribution to the field of voice communication. The program honored Janis and Metropolitan Opera star and recording artist, Frederica von Stade. The annual Voices of Summer Gala is one of The Voice Foundation's premiere events. He served as the first mentor at the Very Special Arts (VSA) International Young Soloists Awards in June 2012. Started by Ambassador Jean Kennedy Smith in 1984, Byron Janis shared his experience and wisdom with the four award recipients. Since 1984, the VSA International Young Soloists Award Program has annually recognized young artists with disabilities from all over the world who demonstrate exceptional music talent.

Janis received two more prestigious awards, including a Lifetime Achievement Award from the National Arts Club on September 12, 2012 and the Breukelein Institute Gaudium Award on November 12, 2012. Other honors include the Classical CD Critics Choice (for his recording of the Rachmaninoff Piano Concerto No. 3), the National Public Radio Critics' Choice Award (for his all-Chopin CD), and the Distinguished Pennsylvania Artist Award. He is recipient of honorary doctorates and the Sanford Fellowship (the highest honor of Yale University).

Janis is the National Ambassador for the Arthritis Foundation, Chairman of the Global Forum Arts and Culture Committee, head of the Visual and Performing Arts in America, and member on the Board and the Music Advisory Committee for Pro Musicis.

Janis released the digitally re-mastered compilation CD entitled, The Chopin Collection, in April 2012. This new release is a combination of Byron Janis Plays Chopin, which was released in 1996 and Byron Janis True Romantic, which was released in 1998, both with stellar reviews. The Chopin Collection brings together for the first time on a single CD both recordings of the two previously unknown versions of Chopin waltzes which he discovered: the ‘Grande Valse Brilliante’ in E♭ major (Op. 18) and the Waltz in G♭ major (Op. 70, No. 1).

Janis and his first wife, June Dickson Wright (sister of Clarissa Dickson Wright), by whom he had a son, Stefan, were divorced in 1965, after eleven years of marriage. He remarried on April 11, 1966,[5] to painter Maria Veronica Cooper (born September 15, 1937), daughter of actors Veronica Cooper and Gary Cooper.[6]

Janis wrote an autobiography, Chopin and Beyond: My Extraordinary Life in Music and the Paranormal.

This article uses material from the article Byron Janis from the free encyclopedia Wikipedia and it is licensed under the GNU Free Documentation License.

Alexander Glazunov Walzer aus dem Ballett "Les Ruses d'Amour" op. 61
Update Required To play the media you will need to either update your browser to a recent version or update your Flash plugin.