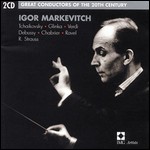 Igor Borisovitch Markevitch (Russian: Игорь Борисович Маркевич, Igor Borisovich Markevich, Ukrainian: Ігор Борисович Маркевич, Ihor Borysovych Markevych; July 27, 1912 – March 7, 1983) was a Russian composer and conductor who studied and worked in Paris, was naturalized Italian in 1947 and French in 1982. He was commissioned in 1929 for a piano concerto by impresario Serge Diaghilev of the Ballet Russe de Monte Carlo.

Markevitch settled in Italy during World War II, becoming a citizen. After the war, he moved to Switzerland. He had an international conducting career from there. He was married twice and had three sons and two daughters.

Igor Markevitch was born in Kiev, present Ukraine, at that time Russia, to an old family of Cossack starshyna who were ennobled in the 18th century. His great-grandfather Andrey Markevitch was a Secretary of State at the time of Alexander II of Russia and Actual Privy Councilor in St. Petersburg. Andrey Markevitch was also one of founders of the Russian Musical Society. Igor Markevitch was a son of pianist Boris Markevitch and Zoia Pokhitonova (daughter of painter Ivan Pokhitonov). The family moved to Paris in 1914 when Igor was two. They moved again to neutral Switzerland in 1916 during the World War I, because of his father Boris's health problems (he later died of tuberculosis). Pianist Alfred Cortot, perhaps the greatest French pianist of his time, recognized the boy's talent. He advised him at age 14 in 1926 to go to Paris for training in both composition and piano at the École Normale. There Markevitch studied under both Cortot and Nadia Boulanger.

Markevitch gained important recognition in 1929 when choreographer-impresario Serge Diaghilev discovered him and commissioned a piano concerto from him. In addition, Diaghilev invited him to collaborate on a ballet with Boris Kochno, a dancer and librettist. In a letter to the London Times, Diaghilev hailed Markevitch as the composer who would put an end to 'a scandalous period of music ... of cynical-sentimental simplicity'.[1] The ballet project came to an end with Diaghilev's death on 19 August 1929, but Markevitch's compositions were accepted by the publisher Schott.

He produced at least one major work per year during the 1930s. He was rated among the leading contemporary composers of the time, even to the extent of being hailed as "the second Igor", after Igor Stravinsky. Markevitch collaborated on the ballet score Rébus with Leonid Massine in 1931; and L'envol d'Icare in 1932 with Serge Lifar. Neither was staged, but both scores were performed in concert. L'envol d'Icare, based on the legend of the fall of Icarus, which Markevitch recorded in 1938 conducting the Belgian National Orchestra, was especially radical, introducing quarter-tones in both woodwinds and strings.[2] (In 1943 he revised the work under the title Icare, eliminating the quarter tones and simplifying the rhythms and orchestration.) Béla Bartók once described Markevitch as "...the most striking personality in contemporary music..." and claimed him as an influence on his own creative work.[3] An independent version of L'envol d'Icare for two pianos and percussion, which Bartók heard, is believed to have influenced the latter's own Sonata for 2 Pianos and Percussion.[4]

Markevitch continued composing as war approached, but in October 1941, not long after completing his last original work, the Variations, Fugue and Envoi on a Theme of Handel for piano, he fell seriously ill. After recovering, he decided to give up the composition and focus exclusively on conducting. His last compositional projects were the revision of L'envol d'Icare and arrangements of other composers' music. His version of J. S. Bach's Musikalisches Opfer (Musical Offering) is especially notable.

He had débuted as a conductor at age 18 with the Royal Concertgebouw Orchestra. After presiding at the Dutch premiere of Rébus, Markevitch had studied conducting with Pierre Monteux and Hermann Scherchen.[5] As a conductor, he was much admired for his interpretations of the French, Russian and Austro-German repertory, and of twentieth-century music in general.

He settled in Italy, and during the Second World War was active in the partisan movement. He married and settled in Switzerland in 1947 following the war. He pursued his conducting career worldwide. He became permanent conductor of the Orchestre Lamoureux in Paris in the 1950s, conducted the Spanish RTVE Orchestra in 1965, the London Symphony Orchestra in 1966 and was also permanent conductor of the Monte-Carlo Philharmonic Orchestra.

In 1970, after ignoring his own compositions for nearly 30 years, Markevitch began to conduct his own music frequently, triggering its slow revival. His last concert was in Kiev, his birthplace. He died suddenly from a heart attack in Antibes on March 7, 1983, after a concert tour in Japan and Russia.

The Ukrainian Markevitch (also spelled in Polish as Markewiscz) family is believed to have originated 300 years ago from a common paternal ancestor and his wife. Their ethnicity is disputed as Polish, Ukrainian, or Serbian, as the patronymic name is widespread among central European peoples.[6][7]

Markevitch married Kyra Nijinsky (1913-1998), daughter of the great ballet dancer Vaslav Nijinsky and his wife Romola de Pulszky.[8][9] they had a son Vaslav Markevitch (b. 1936) before they divorced.

Secondly, Markevitch married Donna Topazia Caetani (1921-1990), the only child of Don Michelangelo Caetani dei Duchi di Sermoneta and his wife, the former Cora Antinori.[10] Cora Caetani ran the boutique of Jansen, the Paris decorating firm. Their son, Oleg Caetani Markevitch, became chief conductor and artistic director of the Melbourne Symphony Orchestra in Australia. They also had two daughters together: Allegra (b. 1950) and Nathalie (b. 1951), and another son, Timour Markevitch (1960-1962).

Toward the end of his life, Markevitch and the Spanish pianist Carlota Garriga became companions.

This article uses material from the article Igor Markevitch from the free encyclopedia Wikipedia and it is licensed under the GNU Free Documentation License.