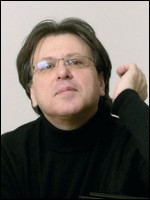 Andrei Gavrilov was born into a multinational family of artists in Moscow. His father was Vladimir Gavrilov (May 30, 1923December 4, 1974[1][2]), one of the leading Russian painters of the middle of the 20th century,[3] through whom Gavrilov also has German ancestors. His mother was the Armenian pianist Assanetta Eguiserian (December 20, 1925November 29, 2006), who had studied with Heinrich Neuhaus and gave Gavrilov his first piano lessons at age 2. In 1961 he was accepted at the Moscow Central Music School and became a student of Tatyana Kestner, who had studied with Alexander Goldenweiser. He completed his studies with another Neuhaus disciple, Lev Naumov, at the Moscow Conservatory. At the age of 18, after one semester at the conservatory,[4] he won the International Tchaikovsky Competition in 1974 and rose to international fame when, at the Salzburg Festival the same year, he substituted for Sviatoslav Richter[5] whose protégé he had been since his youth. Until 1979 Gavrilov performed in all the major music centres of the world with up to 90 concerts a year, and also continued his studies at the university.[4]

In 1979, at the first peak of Gavrilov's career, Herbert von Karajan, who had heard him in Tchaikovsky's First Concerto in Berlin, offered recordings of all the Rachmaninoff concertos, despite the fact that Karajan only rarely conducted them. In December 1979 recordings were scheduled in Berlin with the Berlin Philharmonic for the 2nd concerto, but Gavrilov did not appear for the rehearsals. It was discovered that due to his critical remarks about the Soviet regime, the head of the KGB and later General Secretary of the Communist Party of the Soviet Union Yuri Andropov, with the approval of Leonid Brezhnev, had seized Gavrilov's passport and the flight ticket and cut his telephone line. Later Gavrilov was put under house arrest; at times he was committed to psychiatric wards. Militia guarding Gavrilov once showed him an official order where it was stated that a fatal accident would not be unwelcome.[6] Only through Mikhail Gorbachev's intervention did this situation end in 1984, and Gavrilov received a "free passport", so that he could perform again in the West without having to obtain political asylum. In the following years he lived in London and from 1989 in Bad Camberg near Wiesbaden, Germany and also assumed German citizenship.[7]

In 1993 he retired from the cultural scene, cancelled concerts[6] and did not make any further studio recordings from that time. According to an interview with The Guardian, he saw himself at the peak of his career, materially well situated, but not as a free, original and idealistic artist apart from the music industry.[6] The planned two-year sabbatical[4] eventually grew to eight years. At this time he studied the intentions of the composers in their works, religious and philosophical questions, lived half a year in Fiji, and fundamentally reworked his piano technique.[4] In 2001 he moved to Lucerne, Switzerland and resumed concertizing in the 2001/02 season. Since August 2008 he has been living with his second wife and their son in Kanton Zürich.

In 1974 Melodiya recorded the 1st Tchaikovsky Concerto at the prize winner's concert of the Tchaikovsky Competition together with a live solo recital. In 1976 a studio recording of Rachmaninoff's 3rd concerto followed. From 1977 to 1989 he worked exclusively for EMI. From that time comes the legendary recording of the Chopin Études and many other works, notably by Chopin, Scriabin, Prokofiev, Rachmaninoff and J. S. Bach. From 1991 to 1993 he recorded for Deutsche Grammophon, where he also duplicated some works already recorded for EMI. A number of projects, many with recordings new to Gavrilov's discography, were announced in 1992 but not realized: Bach's English Suites, the complete Beethoven piano concerti, the Choral Fantasia and the Diabelli Variations, as well as vaguer plans for works by Liszt (Transcendental Etudes, Paganini Etudes), Ravel's complete works for piano solo and with orchestra, and the piano concertos of Grieg and Schumann.[8] In 2010 a number of new DVD recordings are planned for release.

If not stated otherwise, recordings up to 1976 are released on Melodiya, those from 1977 to 1989 on EMI (in the beginning as a co-production with Melodiya), those from 1991 to 1993 on Deutsche Grammophon.

TV and radio broadcasts and other recordings

This article uses material from the article Andrei Gavrilov from the free encyclopedia Wikipedia and it is licensed under the GNU Free Documentation License.