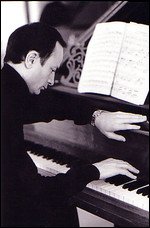 Robert Casadesus (April 7, 1899 – September 19, 1972) was a renowned 20th-century French pianist and composer. He was the most prominent member of a famous musical family, being the nephew of Henri Casadesus and Marius Casadesus, husband of Gaby Casadesus, and father of Jean Casadesus.

Robert Casadesus was born and died in Paris, and studied there at the Conservatoire with Louis Diémer, taking a Premier Prix (First Prize) in 1913 and the Prix Diémer in 1920. Robert then entered the class of Lucien Capet, who had exceptional influence. Capet had founded a famous quartet that bore his name (Capet Quartet) and in which two of Roberts uncles played: Henri and Marcel. The Quartet often rehearsed in the Casadesus home, and so it was that Robert was initiated into chamber music. The Beethoven Quartets held no secret for himhe knew them backwards and forwards without ever having played them.

Beginning in 1922, Casadesus collaborated with the composer Maurice Ravel on a project to create piano rolls of a number of his works. Casadesus and Ravel also shared the concert platform in France, Spain and England. Casadesus toured widely as a piano soloist and often performed with his wife, the pianist Gaby (L'Hôte) Casadesus, whom he married in 1921.

From 1935 Casadesus taught at the American Conservatory at Fontainebleau. He and his family spent the Second World War years in the United States and had a home in Princeton, New Jersey. He and Gaby established the Fontainebleau School at Newport, Rhode Island after the fall of France. In 1942 the Fontainebleau School was moved to Great Barrington, Massachusetts, in the Berkshires. After the war, in 1946, Robert Casadesus, now Director of the American Conservatory oversaw its return to Fontainebleau. His pupils included Claude Helffer, Grant Johannesen, Monique Haas, Mary Louise Boehm and William Eves, who appeared on the Bell Telephone Hour fine arts documentary TV series and was a longtime piano instructor at Bowdoin College.

A product of the school of French pianism, his style of playing was classical and restrained with a very delicate approach to melody and line. He is especially noted as an interpreter of Mozart. Among his other recordings are those of the complete piano music of Ravel (for which he was awarded the Grand Prix de l'Academie Charles Cros and the Grand Prix de l'Academie du Disque,) and the Beethoven Violin Sonatas with Zino Francescatti (of which the Kreutzer Sonata was filmed and has been released on DVD). The Bell Telephone Hour (a fine arts-related television series broadcast on NBC for many years) produced a one-hour television film, in 1967, on Robert, Gaby and their son Jean, titled "The First Family of the Piano."

Casadesus recorded several of Mozarts piano concertos with George Szell and the Cleveland Orchestra (sometimes billed as the Columbia Symphony for contractual reasons). Casadesus was joined by his wife Gaby and their son Jean in recordings of Mozart's concertos for two and three pianos, accompanied by the Philadelphia Orchestra conducted by Eugene Ormandy. The recordings have been reissued on CD several times by Sony Classical. There were also recordings of four of Bach's two and three Keyboard Concertos, issued by Columbia, under the baton of Eugene Ormandy, Pierre Deveux and Edmund de Stoutz.

Casadesus recorded Mozarts piano concerto No. 27 in B flat with Sir John Barbirolli and the New York Philharmonic in 1941.

This article uses material from the article Robert Casadesus from the free encyclopedia Wikipedia and it is licensed under the GNU Free Documentation License.

Frédéric Chopin Allegro de concert op. 46 für Klavier und Orchester
Update Required To play the media you will need to either update your browser to a recent version or update your Flash plugin.