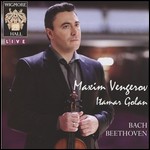 Born in 1974 in Novosibirsk,[1][2] Vengerov's mother, Larisa Borisovna Vengorova, directed an orphanage, and directed a children's choir there. His father, Aleksandr Vengerov, played first oboe in the Philharmonic Orchestra Novosibirsk.[2] Vengerov is their only child. At age five, he began studying the violin with Galina Tourchaninova, from 1978 to 1981. From 1984 to 1989, he was a pupil of Zakhar Bron. At age 10, Vengerov won first place at the 1984 International Karol Lipiński and Henryk Wieniawski Young Violin Player Competition. When Bron left Russia in 1987 to teach at the Royal Academy of Music in London, Vengerov and his mother followed him there. When Bron relocated to Lübeck to open a school there, Vengerov followed suit.[2]

In 1990, Vengerov won the International Carl Flesch Competition in London. Numerous recording prizes and "Artist of the Year" titles (including one from Gramophone) followed, as did a Grammy Award, Edison Award (for the recording of Shostakovich Second Concerto), and the "Echo Klassik" annual distinction awarded to him by the German Television in 2003 for a recital featuring works by J. S. Bach).

In 1997, Vengerov became the first classical musician to be appointed an International Goodwill Ambassador by UNICEF. In this capacity as a UNICEF Envoy for Music, he has met and performed for children in such places as Uganda, Thailand and Kosovo. Playing by Heart, an American television production (on NBC), about the artist's meetings with young musicians during his master classes, was shown at the Cannes Festival in 1999. He took a two-year course in the Baroque violin and repertoire of the epoch.

Vengerov took a 6-month sabbatical in 2005, during which time he suffered shoulder damage from weightlifting.[3] He subsequently turned his attention to conducting. His interest in conducting increased during his time away from recitals, to recuperate from a shoulder injury. In 2010, he was appointed the first chief conductor of the Menuhin Festival Gstaad Orchestra. He continued conducting studies with Yuri Simonov, and graduated as a conductor with a diploma of excellence from the Ippolitov-Ivanov State Musical Pedagogical Institute in June 2014. Vengerov then enrolled in a further 2-year program of opera conducting. Vengerov's work with contemporary composers has included premiering the violin concerto La Joie de la souffrance by Qigang Chen.[4]

Vengerov has held various teaching positions around the world, and is currently Ambassador and visiting Professor of the Menuhin Music Academy in Switzerland (IMMA) and as of September 2016, the Polonsky Visiting Professor of Violin at the Royal College of Music in London. Vengerov has served on numerous juries, including the Donatella Flick conducting competition, the Menuhin Violin Competition and in May 2013 conducted the finals during the Montreal International Violin Competition. He was chairman of the Henryk Wieniawski Violin Competition in 2011, and was re-elected as chairman in 2016. Vengerov has received fellowships and honours from the Royal Academy of Music and orders of merit from both Romania and Germany’s Saarland, and in 2012 was awarded an Honorary Visiting Fellowship at Trinity College, Oxford. He has received numerous awards including the Grammy Award for Best Instrumental Soloist Performance (with Orchestra) (2003), two Gramophone Classical Music Awards (1994, 1995), a Classic Brit Award (2004), five Edison Classical Music Awards (1995, 1996, 1998, 2003, 2004), two Echo Music Prizes (1997, 2003) and a World Economic Forum Crystal award (2007) - honouring artists who have used their art to improve the state of the world.

In November 2011, Vengerov married Olga Gringolts, sister of the violinist Ilya Gringolts and an art historian. The couple have two daughters.[6] The family resides in Monaco.[5]

This article uses material from the article Maxim Vengerov from the free encyclopedia Wikipedia and it is licensed under the GNU Free Documentation License.