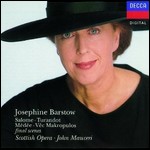 Josephine Barstow was born in Sheffield and educated at the University of Birmingham. She made her professional debut (Mimì in La bohème) with the touring company Opera for All in 1964. She won a scholarship to study during 1965-66 at the London Opera Centre, where she met her husband Ande Anderson (d. 1996). During the following season, she sang Gluck's Euridice and Verdi's Violetta for the Sadler's Wells Opera Company and in 1968 she began a three-year contract with Welsh National Opera. In 1969 she made her Royal Opera debut as one of the Nieces in Peter Grimes

Among other roles with the Royal Opera, she has sung Alice Ford (Falstaff), Santuzza (Cavalleria rusticana), Ellen Orford in Peter Grimes, Leonore (Fidelio) and the Old Countess (The Queen of Spades). She also appeared in the world premières of two operas by Sir Michael Tippett: The Knot Garden (as Denise) and The Ice Break (as Gayle).

At Glyndebourne, she has appeared as Lady Macbeth, Elettra (Idomeneo) and Leonore. Roles with English National Opera include an acclaimed Violetta, Emilia Marty (The Makropulos Case), Natasha in the British stage première of War and Peace and the title roles in Salome, Aida, Arabella, Lady Macbeth of Mtsensk and Der Rosenkavalier.

Among other engagements outside the British Isles, she has appeared at the New York Metropolitan Opera, the Chicago Lyric Opera, the Vienna State Opera and the Bayreuth Festival. Latterly, she has performed a number of roles with Opera North, including Alice Ford, Lady Macbeth, Kostelnicka in Jenfa, Marie in Wozzeck, Lady Billows in Albert Herring and in the title roles of Gloriana, Médée and Aida. In October 2011 she appeared as the Countess in The Queen of Spades, also with Opera North.

This article uses material from the article Josephine Barstow from the free encyclopedia Wikipedia and it is licensed under the GNU Free Documentation License.