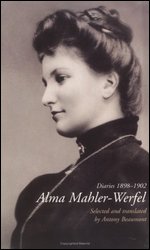 Alma Maria Mahler Gropius Werfel (born Schindler; 31 August 1879 – 11 December 1964) was a Viennese-born socialite well known in her youth for her beauty and vivacity. She became the wife, successively, of composer Gustav Mahler, architect Walter Gropius, and novelist Franz Werfel, as well as the consort of several other prominent men. Musically active in her teens, she was the composer of at least seventeen songs. In later years her salon became an important feature of the artistic scene, first in Vienna, then in Los Angeles.

Alma Schindler was born in Vienna, Austria (then Austria-Hungary), to the prominent landscape painter Emil Jakob Schindler and his wife Anna von Bergen, in 1879. Although Alma later claimed to have grown up in a privileged environment, the family was only moderately successful. After her father's death (1892), her mother married her late husband's former pupil Carl Moll, who was a co-founder of the Vienna Secession.

Alma's lively social interactions in her youth included friendships with the artists of the Vienna Secession, among them Gustav Klimt. As a young woman she had a series of flirtations, including Klimt, theater director Max Burckhard and composer Alexander von Zemlinsky.

On 9 March 1902 she married Gustav Mahler, who was nineteen years her senior and the director of the Vienna Court Opera. With him she had two daughters, Maria Anna (1902-1907), who died of scarlet fever or diphtheria, and Anna (1904-1988), who later became a sculptor. The terms of Alma's marriage with Gustav were that she would forgo her own interest in composing. Artistically stifled herself, she embraced her role as a loving wife and supporter of Gustav's music. However, later in their marriage, after becoming severely depressed in the wake of Maria's death, she began an affair with the young architect Walter Gropius (later head of the Bauhaus), whom she met during a rest at a spa. Following the emotional crisis in their marriage after Gustav's discovery of the affair, Gustav began to take a serious interest in Alma's musical compositions, regretting his earlier dismissive attitude. Upon his urging, and under his guidance, she prepared five of her songs for publication (they were issued in 1910, by Gustav's own publisher, Universal Edition). After this turbulent period in their marriage, Alma and Gustav traveled to New York, where Gustav was seasonally engaged as a conductor. In February, 1911, he fell severely ill with an infection related to a heart defect that had been diagnosed several years earlier. He died in May, shortly after their return to Vienna.

After Mahler's death, Alma did not immediately resume contact with Gropius. Between 1912 and 1914 she had a tumultuous affair with the artist Oskar Kokoschka, who created many works inspired by his relationship with her, including, perhaps most famously, his painting Bride of the Wind. Kokoschka's intense possessiveness wore on Alma, and the emotional vicissitudes of the relationship tired them both. With the coming of World War I, Kokoschka enlisted in the Austro-Hungarian Army, and Alma subsequently distanced herself from him and resumed contact with Gropius, who was also serving in combat at that time. She and Gropius married in 1915 during one of his military leaves. They had a daughter together, Manon Gropius (1916-1935), who died of polio at the age of 18. (Composer Alban Berg wrote his Violin Concerto in memory of her.) While Gropius's military duties were still keeping him absent, Alma met and began an affair with Prague-born poet and writer Franz Werfel in the fall of 1917. She became pregnant and gave birth to a son, Martin Carl Johannes Gropius (1918-1919). Gropius at first believed that the child was his, but Alma's ongoing affair with Werfel was soon exposed.

Within a year, they agreed to a divorce. In the meantime, Martin, who had been born prematurely, developed hydrocephalus and died at the age of ten months. Alma's divorce from Gropius became final in 1920. She and Werfel began openly living together from that point on. However, she postponed marrying Werfel until 1929, after which she styled herself "Alma Mahler-Werfel".

In 1938, following the Anschluss, Alma and Werfel, who was Jewish, were forced to flee Austria for France; they maintained a household in Sanary-sur-Mer, on the French Riviera, from summer 1938 until spring 1940. With the German invasion and occupation of France during World War II, and the deportation of Jews and political adversaries to Nazi concentration camps, the couple were no longer safe in France and frantically sought to secure their emigration to the United States. In Marseille they were contacted by Varian Fry, an American journalist and emissary of the Emergency Rescue Committee, a private American relief organization that came to the aid of many refugee intellectuals and artists at that time. Since exit visas could not be obtained, Fry arranged for the Werfels to journey on foot across the Pyrenees into Spain, in order to evade the Vichy French border officials. From Spain, Alma and Franz traveled on to Portugal and then boarded a ship for New York City. Eventually they settled in Los Angeles, where Werfel, who had already enjoyed moderate renown in the U.S. as an author, achieved a huge popular success with his novel The Song of Bernadette, which was made into a 1943 film starring Jennifer Jones, and the science fiction novel, Star of the Unborn, published after his death. Werfel, who had experienced serious heart problems throughout their exile, died of a heart attack in California in 1945.

In 1946 Mahler-Werfel became a U.S. citizen. Several years later she moved to New York City, where she remained a major cultural figure. Leonard Bernstein, who was a great champion of Gustav Mahler's music, stated in his Charles Eliot Norton lectures of 1973 that Alma had attended some of his rehearsals. Bernstein considered her to be a "living" link to both Mahler and Alban Berg, having not had the chance to meet either man since he was of a later generation.

Her much-married state was made sport of in Tom Lehrer's song "Alma." He also commented gleefully on how her newspaper obituary had a lengthy list of her many gentleman callers.

In Mahler (1974) by director Ken Russell, Gustav Mahler while on his last train journey, remembers the important events of his life - his relationship with his wife, the death of his brother and of his young daughter, his trouble with the muses, and more. In the film, Alma was played by Georgina Hale, and Gustav was played by Robert Powell.

In 1996, Israeli writer Joshua Sobol and Austrian director Paulus Manker created the polydrama Alma. It played in Vienna for six successive seasons, and toured to Venice, Lisbon, Los Angeles, Petronell, Berlin and Semmering — all places where Mahler-Werfel had lived. The scenes of Mahler-Werfel's life were performed simultaneously on all floors and in all rooms of a special building. The guests were invited to abandon the immobilized position of a spectator in a conventional drama, replace it with the mobile activity of a traveller, and watch a "theatrical journey". Each audience member chose the events, the path, and the person to follow after each event, thus constructing her or his personal version of the "Polydrama."

Mohammed Fairouz set the words of Alma Mahler in his song cycle Jeder Mensch. It was premiered in a coupling with songs of Alma Mahler by mezzo-soprano Kate Lindsey in 2011.[1]

A treatment of Mahler-Werfel's life is presented in the 2001 Bruce Beresford film Bride of the Wind. In the film, Alma was played by Australian actress Sarah Wynter. Gustav Mahler was portrayed by British actor Jonathan Pryce. French actor Vincent Perez portrayed Oskar Kokoschka.

Martin Chervin wrote a one-woman play about her first marriage called Myself, Alma Mahler. In 1998 extracts from her diaries were published, covering the years from 1898 to 1902, up until the point she married Mahler. The 2001 novel The Artist's Wife by Max Phillips has her tell her own story from the afterlife, concentrating on her complicated relationships.

In 2010 the German filmmaker Percy Adlon and his son Felix Adlon released their film Mahler auf der Couch (Mahler on the Couch), which relates Gustav Mahler's tormented relationship with his wife Alma and his meeting with Sigmund Freud in 1910. In the film's introduction, the directors stated, "That it happened is fact. How it happened is fiction." In fact, the only source for the Mahler-Freud meeting is a one-page account in Ernest Jones' biography of Freud (Ernest Jones, The Life and Work of Sigmund Freud, three volumes, 1953-1957, vol. 2, pp. 8889, Basic Books, 1955; also in the abridged, one-volume edition, pp. 358359, Basic Books, 1961).

Less amusing is the story of her two books on Mahler and their impact on 'Mahler studies'. As an articulate, well-connected and influential woman who outlived her first husband by more than 50 years, Mahler-Werfel was for decades the main authority on the mature Mahler's values, character and day-to-day behaviour, and her various publications quickly became the central source material for Mahler scholars and music-lovers alike. Unfortunately, as scholars investigated the picture she painted of Mahler and her relationship with him, her accounts have increasingly been revealed as unreliable, false and misleading. Nevertheless, the deliberate distortions have had a significant influence upon several generations of scholars, interpreters and music-lovers. Citing the serious contradictions between Alma's accounts and other evidence, including her own diaries, several historians and biographers have begun to speak of the "Alma Problem". According to Hugh Wood,

"Often she is the only witness, and the biographer has to depend on her while doubting with every sentence her capacity for telling the truth. Everything that passed through her hands must be regarded as tainted"[2]

Alma played the piano from childhood and in her memoirs reports that she first attempted composing at age 9. She studied composition with Josef Labor beginning in 1895. She met Alexander von Zemlinsky in early 1900, began composition lessons with him that fall, and continued as his student until her engagement with Gustav Mahler (December 1901), after which she ceased composing. Up until that time, she had composed/sketched many Lieder, and also worked on instrumental pieces as well as a segment of an opera. She may have resumed composing after 1910, at least sporadically, but the chronology of her songs is difficult to establish because she did not date her manuscripts.

Only a total of 17 songs by her survive. Fourteen were published during her lifetime, in three publications dated 1910, 1915, and 1924; it is unclear whether she continued composing at all after her last publication. The works appeared under the name 'Alma Maria Schindler-Mahler'; the cover of the 1915 set was illustrated by Oskar Kokoschka. Three additional songs were discovered in manuscript posthumously; two of them were published in the year 2000, and one remains unpublished. Her personal papers, including music manuscripts, are held at the University of Pennsylvania, and at the Austrian National Library in Vienna.

These songs are regularly performed and recorded. Orchestral versions of the accompaniments have been produced by David and Colin Matthews, and Jorma Panula.

This article uses material from the article Alma Mahler-Werfel from the free encyclopedia Wikipedia and it is licensed under the GNU Free Documentation License.