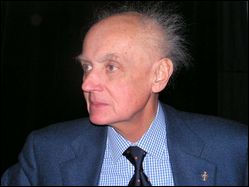 Wojciech Kilar (Polish: [vjtex kilar]; 17 July 1932 29 December 2013) was a Polish classical and film music composer. His film scores have won many honors including the best score award for the music to Ziemia obiecana / The Promised Land in 1975, followed by the Prix Louis Delluc in 1980 for the music to Le Roi et l'Oiseau / The King and the Mockingbird, and an award at the Cork International Film Festival for the music to From A Far Country (1981) about the life of Pope John Paul II.

One of his greatest successes came with his score to Francis Ford Coppola's Dracula in 1993 which received the ASCAP Award from the American Society of Composers, Authors, and Producers in Los Angeles, nominated also for the Saturn Award for Best Music in a science fiction, fantasy, or horror film in San Francisco in 1993.[1] In 2003, he won the César Award for Best Film Music written for The Pianist, at France's 28th César Awards Ceremony in 2003,[2] for which he also received a BAFTA nomination.[3] The Pianist (soundtrack) featured his "Moving to the Ghetto Oct. 31, 1940" with the other 10 tracks being works by Frédéric Chopin. The music in the movie includes pieces by Beethoven and Bach.

Wojciech Kilar was born on 17 July 1932 in Lwów (then Poland; since 1945 in Ukraine).[4] His father was a gynecologist and his mother was a theater actress. Kilar has spent most of his life since 1948 in the city of Katowice in Southern Poland,[4] married (from April 1966 to November 2007) to Barbara Pomianowska, a pianist.[5] Kilar was 22 years old when he met 18-year-old Barbara, his future wife.[6]

Kilar belonged (together with Bolesaw Szabelski, his student Henryk Górecki and Krzysztof Penderecki) to the Polish Avant-garde music movement of the Sixties.[8] In 1977 Kilar was one of the founding members of the Karol Szymanowski Society, based in the mountain town of Zakopane. Kilar chaired the Katowice chapter of the Association of Polish Composers for many years and from 197981 was vice chair of this association's national board. He was also a member of the Repertoire Committee for the "Warsaw Autumn" International Festival of Contemporary Music. In 1991 Polish filmmaker Krzysztof Zanussi made a biographical film about the composer titled Wojciech Kilar.

Having received critical success as a classical composer, Kilar scored his first domestic film in 1959, and has since gone on to write music from some of Poland's most acclaimed directors, including Krzysztof Kielowski, Krzysztof Zanussi, Kazimierz Kutz and Andrzej Wajda. He worked on over 100 titles in his home country, including internationally recognised titles such as Bilans Kwartalny (1975), Spirala (1978), Constans (1980), Imperativ (1982), Rok Spokojnego Soca (1984), and ycie za ycie (1991), plus several others in France and across other parts of Europe. He made his English-language debut with Francis Ford Coppola's adaptation of Dracula. His other English language features Roman Polanski's trio Death and the Maiden (1994), The Ninth Gate (1999) and The Pianist (2002), and Jane Campion's The Portrait of a Lady (1996) were typified by his trademark grinding basses and cellos, deeply romantic themes and minimalist chord progressions.

In addition to his film work, Kilar continued to write and publish purely classical works, which have included a horn sonata, a piece for a wind quintet, several pieces for chamber orchestra and choir, the acclaimed Baltic Canticles, the epic Exodus (famous as the trailer music from Schindler's List), a Concerto for Piano and Orchestra dedicated to Peter Jablonski, and his major work, the September Symphony (2003).[8]

Having abandoned Avant-garde music technical means almost entirely, he continued to employ a simplified musical language, in which sizable masses of sound serve as a backdrop for highlighted melodies. This occurs in those compositions that reference folk music (especially Polish Highlander Gorals folk melodies) and in patriotic and religious pieces.

During the summer of 2013, Kilar manifested signs of poor health, such as fainting and elevated blood pressure, but attributed those symptoms to his heart problems. However, in September he fell while on the street. He was admitted to a hospital, where he was diagnosed with a brain tumor, though news of his illness were not publicly released only until after his death. He underwent a successful surgery to remove the tumor, which caused no serious sideeffects; Kilar was very optimistic and continued to work after the operation.[9] In addition, he underwent radiotherapy for six weeks, a process which left 81yearold Kilar physically exhausted.[10][11][12]

In early December 2013, Kilar left the hospital to return to his residence in Katowice. As he did not have any children, he was taken care of by his niece.[12] He was also regularly visited by a Catholic priest and received the Holy Communion twice during the Christmas season. His condition deteriorated on 28 December and on the morning of Sunday, 29 December 2013, Kilar died.[10] Following the cremation of his body, Kilar's funeral was held on 4 January 2014 at the Cathedral of Christ the King in Katowice. After the service, his ashes were laid to rest alongside those of his wife.[13]

The vast majority of Wojciech Kilar's work remains undiscovered by the music public at large, despite having written music for well over 100 films, including: Bram Stoker's Dracula, Death and the Maiden, The Portrait of a Lady, The Ninth Gate, Pan Tadeusz, The Pianist, Zemsta, and We Own the Night.

Later in life, Kilar composed symphonic music, chamber works and works for solo instruments. January 2001 saw the world premiere of his Missa pro pace (composed for a full symphony orchestra, mixed choir and a quartet of soloists) at the National Philharmonic in Warsaw. The work was written to commemorate the Warsaw Philharmonic's centennial. In December 2001, it was performed again in the Paul VI Audience Hall in the presence of Pope John Paul II.[14] His 1984 composition Angelus was used in the motion picture City of Angels; Orawa, from 1988, found its use in the Santa Clara Vanguard's 2003 production, "Pathways", as well as Grants Pass High School's 2010 production, "Traffic", which named them the 2010 NWAPA champion.

For most of his life, Kilar's output has been dominated by music for film with a small but steady stream of concert works. Post 2000, he has turned to "music of a singular authorship". Since his 2003 September Symphony, (Symphony No.3), a four-movement full scale symphony written for the composer's friend Antoni Wit, Kilar has returned to absolute music. September Symphony was the first symphony by the composer since 1955's Symphony for Strings (along with another student symphony) and Kilar considered it his first mature symphony (composed at age 71).

Since 2003, Kilar has been steadily producing large scale concert works. His Lament (2003) for unaccompanied mixed choir, his Symphony No.4 Sinfonia de Motu (Symphony of Motion) from 2005 written for large orchestra, choir and soloists, his Magnificat Mass from 2006, Symphony No.5 Advent Symphony from 2007 and another large mass, Te Deum premiered in November 2008.[8] Kilar was quoted as saying that he believed he had discovered the philosopher's stone, and that "there was nothing more beautiful than the solitary sound or concord that lasted eternally, that this was the deepest wisdom, nothing like our tricks with sonata allegros, fugues, and harmonics." [15] Kilar's works have been performed by several major international orchestras, including the Philadelphia Orchestra, the Cleveland Orchestra, and the New York Philharmonic.

Wojciech Kilar has received numerous awards for his artistic activity and achievements, including prizes from the Lili Boulanger Foundation in Boston (1960), the Minister of Culture and Art (1967, 1975), the Association of Polish Composers (1975), the Katowice province (1971, 1976, 1980), and the city of Katowice (1975, 1992).[16] He has also been awarded the First Class Award of Merit of the Polish Republic (1980), the Alfred Jurzykowski Foundation Prize in New York City (1984), the Solidarity Independent Trade Union Cultural Committee Arts Award (1989), the Wojciech Korfanty Prize (1995), the "Lux ex Silesia" Prize bestowed by the Archbishop and Metropolitan of Katowice (1995), and the Sonderpreis des Kulturpreis Schlesien des Landes Niedersachsen (1996).

Kilar's film scores have also won him many honors. He received the best score award for the music to Ziemia obiecana / The Promised Land (dir. Andrzej Wajda) at the Festival of Polish Films in Gdansk in 1975. This was followed by the Prix Louis Delluc, which Kilar was awarded in 1980 for the music to an animated film titled Le Roi et l'Oiseau / The King and the Mockingbird, (dir. Paul Grimault). One year later he collected an award at the Cork International Film Festival for the music to Papie Jan Pawel II / Pope John Paul II / Da un paese lontano: Papa Giovanni Paulo II (dir. Krzysztof Zanussi).

Perhaps his greatest success came with his score to Francis Ford Coppola's Dracula, for which Kilar shared the 1993 ASCAP Award from the American Society of Composers, Authors, and Producers in Los Angeles (along with 7 other people and 5 other movies),[17] and was also nominated for the Saturn Award for Best Music in a science fiction, fantasy, or horror film in San Francisco in 1993.[1]

In 2003, he won the César Award for Best Music written for a film, for The Pianist, at France's 28th César Awards Ceremony in 2003,[2] for which he also received a BAFTA nomination.[3] On this movie's published soundtrack he composed "Moving to the Ghetto Oct. 31, 1940" (duration: 1 minute 52 seconds), with the other 10 tracks being works by Frédéric Chopin; the music in the actual movie also includes pieces by Beethoven and Bach.

Orchestral, with instrumental and vocal soloists or accompaniment

During the 2007 election campaign for the National Assembly of the Republic of Poland Wojciech Kilar made a number of statements of his support of the Law and Justice party.[20]

This article uses material from the article Wojciech Kilar from the free encyclopedia Wikipedia and it is licensed under the GNU Free Documentation License.

Joseph Haydn Adagio aus der Sinfonie Nr. 99 Es-Dur
Update Required To play the media you will need to either update your browser to a recent version or update your Flash plugin.