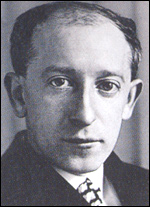 Weinberger was born in Prague, from a family of Jewish origin. He heard Czech folksongs from time spent at his grandparents' farm as a youth.[1] He started to play the piano at age 5, and was composing and conducting by age 10. He began musical studies with Jaroslav Kika. Later teachers included Václav Talich and Rudolf Karel. He became a student at the Prague Conservatory at age 14, as a second-year student. There, he studied composition with Vítzslav Novák and Karel Hoffmeister. Later, at Leipzig, he studied with Max Reger and assumed into his own technique Reger's immense grasp of counterpoint. In September 1922, almost inexplicably, Weinberger moved to the United States where he took up a position as an instructor at Cornell University.[2] Between 1922 and 1926 he was professor of composition at the Ithaca Conservatory (currently Music School of Ithaca College), New York.

When he returned to Czechoslovakia he was appointed director of the National Theater in Bratislava, and later received appointments in Eger, Hungary, and Prague. In 1926 Weinberger completed vanda Dudák (Schwanda the Bagpiper) which became one of the most popular operatic works between the wars, with thousands of performances in hundreds of theaters including the Metropolitan Opera in New York City. His operetta Frühlingsstürme was first performed at the Theatre im Admiralspalast in Berlin on 19 January 1933 with Jarmila Novotna and Richard Tauber in the leading roles. Mary Losseff took over from Novotna in February, but the show was closed down by the Nazis in March.

Although none of his subsequent European works captured audiences as vanda Dudák had, such pieces as the Passacaglia for orchestra and organ, Six Bohemian Dances for violin and piano, the opera The Outcasts of Poker Flat and a grand oratorio Christmas reveal a versatile composer, making use of the widest variety of materials and approaches.[2]

In 1939, after extensive travels to the United States, Bratislava, and Vienna, he fled his native country to escape the Nazis and settled in New York State, teaching there and in Ohio. He wrote a number of works on commission from American orchestras. He became an American citizen in 1948.

During the 1950s, Weinberger moved to St. Petersburg, Florida. In later life, he developed cancer of the brain. This, together with money worries and the neglect of his music, prompted him to take a lethal drug overdose in August 1967. His wife, Hansi Lemberger Weinberger (also known as Jane), survived him until her death on 31 July 1968.

Weinberger composed over 100 works, including operas, operettas, choral works, and works for orchestra.[1] However, the only one which is still remembered is the opera Schwanda the Bagpiper (vanda dudák), a worldwide success after its première in 1927. The opera is still performed occasionally, and the Polka and Fugue from it is often heard in a concert version. It was once considered by the artists of the Walt Disney studio to be made into a Fantasia segment for Fantasia 2000, but lost out to Shostakovich's Piano Concerto No. 2 in F major, in the form of Hans Christian Andersen's "The Steadfast Tin Soldier".

It can be argued that Weinberger used a varied musical language. His studies in Prague and Leipzig stressed formal control and contrapuntal mastery; his teachers, Kika, Novák and Reger were concerned with a certain professional polish and control, but they were also somewhat playful, and that combination can be found in Weinberger's works. These were aspects of his output that alternately received critical acclaim (when they were regarded as somehow genuine) and also set the composer up for a good deal of criticism (when they were thought to be either too automatic or insufficiently profound). It is fair to say that, with the exception of vanda Dudák, Weinberger frustrated his critics even as he pleased them.[2]

This article uses material from the article Jaromír Weinberger from the free encyclopedia Wikipedia and it is licensed under the GNU Free Documentation License.

Léo Delibes Prélude, Mazurka und Valse lente aus dem Ballett "Coppélia"
Update Required To play the media you will need to either update your browser to a recent version or update your Flash plugin.