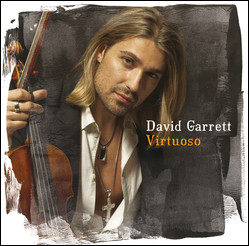 Garrett was born in Aachen, Germany[1] to an American prima ballerina and the German lawyer and jurist, Georg Peter Bongartz. He adopted his mother's maiden name as a pseudonym.

When Garrett was four years old, his father bought a violin for his older brother. The young Garrett took an interest and soon learned to play. A year later, he took part in a competition and won first prize. By the age of seven, he was playing once a week in public. He studied violin at the Lübeck Conservatoire. At the age of 12, Garrett began working with the distinguished Polish violinist Ida Haendel, often traveling to London and other European cities to meet her.[2]

He continued his studies at the Royal College of Music in London. In 2004, he graduated from the Juilliard School in New York City and was one of the first students to study there with Itzhak Perlman.

At the age of 13, Garrett recorded two CDs, appeared on German and Dutch television, and gave a concert in the residence of the Federal Republic of Germany President, the Villa Hammerschmidt, at Dr. von Weizsäckers personal invitation. He was offered the use of the famous Stradivarius "San Lorenzo", which is among the best instruments of the "golden period". At the age of 14, as the youngest soloist ever, Garrett signed an exclusive contract with Deutsche Grammophon Gesellschaft. Aged 17, he played with the Munich Philharmonic Orchestra under the direction of Zubin Mehta in Delhi and Mumbai in concerts marking the 50th anniversary of Indias Independence.[3]

Two years later, Garrett played with the Rundfunk-Sinfonieorchester in Berlin, under the direction of Rafael Frühbeck de Burgos, and was hailed by critics. This led to an invitation to perform at Expo 2000 in Hannover. At the age of 21, he was invited to perform at the BBC Proms.

While studying at Juilliard, Garrett supplemented his income by working as a model.[4]

Garrett's 2008 Encore on DECCA pursues an aim of arousing young peoples interest in classical music. The release contains arrangements and compositions of his own of pieces and melodies that have accompanied him in his life so far. Together with his band, consisting of keyboard, guitar and drums, he gives concerts that include classical sonatas (accompanied by a concert grand piano), arrangements, and compositions, as well as "Nothing Else Matters" by Metallica which was performed on the Public Broadcasting Service (PBS) presentation David Garrett: Live in Berlin recorded in January 2009.[5]

In Autumn 2007, Garrett was chosen by the Montegrappa firm (whose articles are distributed by Montblanc throughout the world) as an ambassador for the launch of the new pens from the Tributo ad Antonio Stradivari collection. The event will take place in several different venues, including Rome, New York, Hong Kong, Berlin, and London. On this occasion, Garrett has been offered a Stradivarius from the Gli Archi di Palazzo Comunale collection.[6]

He joined the 9th annual Independent Music Awards judging panel to assist independent musicians' careers.[7] His most recent album, Rock Symphonies, was released 20 July 2010 in USA/Canada and on 24 September in Germany/Switzerland/Austria.

This article uses material from the article David Garrett (violinist) from the free encyclopedia Wikipedia and it is licensed under the GNU Free Documentation License.