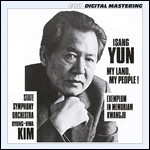 Isang Yun (also spelled Yun I-sang; 17 September 1917 - 3 November 1995) was a Korean-born composer who made his later career in Germany.

Yun was born in Chungmu City, Korea (now absorbed into Tongyeong in present day South Korea) in 1917, the son of poet Yun Ki-hyon. He began writing music at the age of 14, and began studying music formally two years later, in 1933. He studied at the Osaka Conservatory, and composition under Tomojiro Ikenouchi in Tokyo from 1938. After Japan entered World War II, he moved back to Korea and participated in the Korean independence movement. He was captured and imprisoned by the Japanese in 1943.

After the war, he did welfare work, establishing an orphanage for war orphans, and teaching music in Tongyeong and Busan. After the armistice ceasing hostilities in the Korean War in 1953, he began teaching at the Seoul National University. He received the Seoul City Culture Award in 1955, and traveled to Europe the following year to finish his musical studies.

In Paris (till 1957) and West Berlin (195759), he studied composition under Tony Aubin, Pierre Revel, Boris Blacher, Josef Rufer, and Reinhard Schwarz-Schilling. In 1958 he attended the International Summer Courses of Contemporary Music in Darmstadt, and began his career in Europe with premieres of his Music for Seven Instruments in Darmstadt and Five Pieces for Piano in Bilthoven. The premiere of his oratorio Om mani padme hum in Hanover 1965 and Réak in Donaueschingen 1966 gave him international renown. With "Réak" he introduced the sound idea of Chinese-Korean ceremonial music as well as the East Asian mouth organ saenghwang (Korean), sheng (Chinese), or sh (Japanese) into Western avant-garde music.

From October 1959, Yun had been living in Krefeld, Freiburg im Breisgau and Köln (Cologne). With a grant from the Ford Foundation, he and his family settled in West Berlin in 1964. However, due to a visit to North Korea in 1963, he was kidnapped by the South Korean secret service from West Berlin on June 17th, 1967. Via Bonn he was taken to Seoul, condemned for espionage and threatened with life imprisonment. A worldwide petition led by Guenter Freudenberg and Francis Travis was presented to the South Korean government, signed by approximately 200 artists, including Igor Stravinsky and Herbert von Karajan, Luigi Dallapiccola, Hans Werner Henze, Heinz Holliger, Mauricio Kagel, Joseph Keilberth, Otto Klemperer, György Ligeti, Arne Mellnäs, Per Nørgård, Karlheinz Stockhausen, and Bernd Alois Zimmermann. Isang Yun was released on 23 February 1969, returning to West Berlin at the end of March. In 1971, he obtained German citizenship. He never returned to South Korea. From 1973 he began participating in the call for the democratization of South Korea, and the reunification of the divided country.

After 1979 Yun returned several times to North Korea to introduce new Western composition techniques as well as his own music. In 1982 the first Isang Yun Festival took place in Pyongyang. In 1984, the Isang Yun Music Institute opened in Pyongyang, North Korea. An ensemble had been founded there under his name. Yun promoted the idea of a joint concert featuring musicians from both Koreas in Panmumjom which failed in 1988, but South Koreans artists could be invited to Pyongyang in 1990.

Two concerts with works of Isang Yun had been performed in Seoul 1982 by Heinz Holliger, Ursula Holliger, and Francis Travis, later by Roswitha Staege and Hans Zender. Yun was invited to attend a festival of his music in South Korea in 1994, but the trip was broken off after internal and external conflicts. On 3 November 1995, Yun died of pneumonia in Berlin. The International Isang Yun Society was founded in Berlin in February 1996.

Yun has often been criticized for his so-called "pro-North Korean activities", i. e. musical activities in North Korea, and his close ties with the Kim Il-sung regime. Oh Kil-nam explained, that Yun persuaded him to relocate to North Korea with his family.[1] When Ohs wife Shin Suk-ja and her little daughters were imprisoned in Yodok camp, Yun helped them and took photos, and a tape from NK to Berlin (West). (For further details and Mr. Yun's own comments see the website of International Isang Yun Society.)

Yun's primary musical concern was the development of Korean music by the means of Western avantgarde music. After experimenting with 12-tone techniques Yun developed his own musical personality in his works of the early 1960s, post-serialistic "sound compositions". Yun's music employed techniques associated with traditional Korean music, such as glissandi, pizzicati, portamenti, vibrati, and above all a very rich vocabulary of ornaments. Essential is the presence of multiple-melodic lines, which Yun called "Haupttöne" ("central" or "main tones").

Yun's composition for symphonic forces started with "sound compositions", i. e. of works, in which homogeneous sound planes are articulated and elaborated: "Bara" (1960) until "Overture" (1973; rev. 1974). A period of discursively structured instrumental concertos followed, beginning with the "Concerto for Violoncello and Orchestra" (1975/76), and climaxing with the "Violin Concerto No. 1" (1981). From 1982 until 1987 he wrote a cycle of five symphonies which are interrelated, yet varied structurally. Striving for freedom and peace is above all "Symphony V" for high baritone and large orchestra (1987) with texts by Nelly Sachs. In 1984 he developed also a new, intimiate "tone" in his chamber music.

At that time peace and reconciliation on the Korea peninsula was his political goal. His lifelong concern with his native country and culture was expressed in several of his compositions, including the orchestral piece "Exemplum in Memoriam Kwangju" (1981) which he composed in memory of the Gwangju massacre and Naui Dang, Naui Minjokiyo! (My Land, My People) for soli, orchestra and choir (South Korean poets, 1987) and Angel in flames (Engel in Flammen) for orchestra with Epilogue for soprano, women's choir and five instruments (1994). Otherwise Yun himself stated often and often not being a political composer but only following the voice of his conscience.

In Europe and the US Yun had received a high reputation as composer of an avantgardistic music with elements of Korean tradition. The technical as well a stylistic difficulties of performing his very artificial and elaborate music are underestimated.

All compositions are published by Bote & Bock / Boosey & Hawkes, Berlin

This article uses material from the article Isang Yun from the free encyclopedia Wikipedia and it is licensed under the GNU Free Documentation License.

Wolfgang Amadeus Mozart Klavierkonzert Nr. 12 A-Dur KV 414
Update Required To play the media you will need to either update your browser to a recent version or update your Flash plugin.