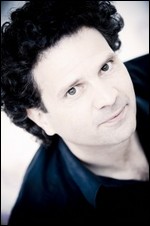 Haefliger was born into a musical family as the son of famed tenor Ernst Haefliger. He grew up in Switzerland and later studied at the Juilliard School. He has had engagements with many of the major orchestras in America and Europe, having made his New York debut in 1988, and is a frequent performer at the Lucerne and Salzburg Festivals as well as at the BBC Proms and the Wiener Festwochen.

Born in Switzerland, Haefliger grew up in a musical household. After completing his studies at the Juilliard School, where he was twice awarded the Gina Bachauer Memorial Scholarship, he made his London recital debut at the Wigmore Hall in 1993 and his London Proms debut with the Philharmonia in 1994. He appeared at the Rheingau Musik Festival in 1994, playing in Schloss Johannisberg Beethoven's Piano Sonata No. 1 and Schumann's Kreisleriana along with preludes and etudes of Rachmaninoff, recorded live. A growing discography includes works by Schumann, Schubert, Mozart and Sofia Gubaidulina for Sony; Schubert lieder with Matthias Goerne, and the "Trout" Quintet and Dvorak Piano Quintet with the Takács Quartet for London/Decca. The "Perspectives" series is recorded and released on the Avie label; recent discs include the second installment of the series, as well as a recital disc of Prokofiev, Wagner and Franck, with Marina Piccinini, his wife.

Haefliger was born into a distinguished musical family and grew up in Switzerland, going on to study at the Juilliard School in New York. With his formidable technique and musicality, and his innate sense of architecture and phrasing, he was quickly recognised as a pianist of the first rank. Engagements with major US orchestras followed swiftly – the New York Philharmonic, Cleveland Orchestra, Los Angeles Philharmonic, Boston Symphony, Pittsburgh, Chicago and the San Francisco Symphony Orchestra among them. He premiered the second piano concerto by Karol Beffa, "La Vie antérieure", with Orchestre de Paris and Paavo Järvi.

In his native Europe too, Haefliger was invited and continues to return to the great orchestras and festivals – such as the Royal Concertgebouw, Rotterdam Philharmonic, Munich Philharmonic, Budapest Festival Orchestra, Deutsches Symphonie-Orchester Berlin, Orchestre de Paris, London Symphony Orchestra, the Philharmonia Orchestra and Vienna Symphony. He also established himself as a superb recitalist, making his New York debut in 1988, and became frequent performer at premier recital venues and festivals around the world, notably the Lucerne and Salzburg Festivals, the BBC Proms and the Wiener Festwochen.

As a recitalist and chamber musician, Haefliger excels in finding the most immediate expression. He was described in The Guardian after a recent recital at the Wigmore Hall as “…one to take risks, which make him a fascinating artist”, and in an earlier review in The Independent, “there seems to be no limit to the resources of Haefliger’s touch”. The Wigmore Hall has also presented Haefliger in a three-part series of recitals together with the baritone Matthias Goerne, the Takacs Quartet, Marina Piccinini and the Safri Duo. Further to this, Haefliger has performed a series of recitals in New York, London and Milan, with his late father, the great tenor Ernst Haefliger, in Schubert's Die Winterreise. In recent years Andreas Haefliger has collaborated with the Carmina Quartet, Wolfgang Holzmair, Matthias Goerne and his wife Marina Piccinini.

This article uses material from the article Andreas Haefliger from the free encyclopedia Wikipedia and it is licensed under the GNU Free Documentation License.

Jacques Ibert Sarabande pour Dulcinée
Update Required To play the media you will need to either update your browser to a recent version or update your Flash plugin.