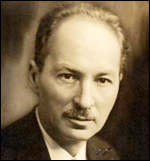 Yon was born in Settimo Vittone, (Piedmont, Italy), and studied at the conservatories of both Milan and Turin, also attending the Accademia di Santa Cecilia in Rome; among his teachers in Milan was Polibio Fumagalli. He served for a time as an organist at the Vatican and at the Royal Church in Rome.

In the spring of 1907 Father John B. Young, pastor of St. Francis Xavier Church Manhattan was in Rome on Vatican business and additionally to seek out a replacement for his organist Gaston Dethier, who was leaving to pursue a concert career. Upon hearing Yon play Father Young was sufficiently impressed to offer him a three year contract. Thus Yon at age 21 came to the United States where from 1907 until 1926 he was the organist of St. Francis Xavier Church. He joined his brother S. Constantino Yon who had preceded him and held a similar position at St. Vincent Ferrer Church.

In 1914 Pietro and Constantino Yon opened the Yon Music Studios[2] in Carnegie Hall, a conservatory for aspiring liturgical musicians utilizing a small number of instructors whose work he respected. Pietro would head the organ department while Constantino was in charge of the vocalists.

In 1919, when Yon was married to Francesca Pesagno, the organist for the occasion was one of Yon's newest friends, the Belgian-American virtuoso Dr. Charles M. Courboin who had been chosen to rededicate the Wanamaker Organ in Philadelphia, now enlarged to 17,000 pipes and still the largest organ in the World. In 1920 Yon would share the stage at Wanamakers with Courboin, Leopold Stokowski, and the Philadelphia Orchestra in one of the gala organ recitals performed at the store through the 1920s.[1]

On January 1, 1922 Yon was appointed 'Titular Organist' of the Vatican, a singular honor with no precedent in the history of the Vatican. The appointment put pressure on local church authorities to promote Yon to the more prestigious position at the Cathedral.

In 1926 he became the assistant organist of St. Patrick's Cathedral, New York. Shortly after his arrival church authorities began to discuss the possibility of replacing their existing Jardine and Odell organs, which were installed when the Cathedral was built with new instruments. The Cathedral's 1929 Jubilee year was near and funding had become available for improvements.

By 1927 it was announced that the Kilgen firm of St. Louis, Missouri had been selected to build the chancel, gallery and echo (triforium) organs. The resulting instrument was then and remains now the magnum opus of the Kilgen firm and one of the finest organs in the World. The tonal designer was Charles M. Courboin.

Also in 1927 Yon was approached by Carnegie Hall to assist in the replacement of their outmoded Hillgreen, Lane and Company organ with a 4 manual 59 rank instrument also by Kilgen with Courboin as tonal director. And a three manual Kilgen instrument was to be built for the Yon Music Studios.

Work proceeded rapidly on the Cathedral chancel organ and by January, 1928 the instrument had been installed (still without the elaborate organ case). Associate organist Yon presided over the dedication recital on January 30, 1928. The organ console was relocated to the sanctuary for the performance, which was a major social and musical event attended by 5,000 ticketholders[1]

On May 1, 1928 Yon was promoted to music director replacing James C. Ungerer, who had been at the Cathedral for thirty six years.

In 1933 when the position of Associate Organist at the Cathedral became vacant, Yon chose as a replacement Edward J. Rivetti, one of his own students. Though Rivetti never actually became principal organist he served as assistant under both Mr. Yon and successor Charles M. Courboin until 1970.

In the spring of 1938 both Pietro and Constantino Yon were appointed as Knights of St. Sylvester by Cardinal Patrick Hayes, who would die within a month of the appointment. He also toured the country giving recitals.

Yon was also a composer, most famous for his Humoresque "L'organo primitivo"- Toccatina for Flute,[4] for organ, and his Christmas piece Gesù bambino.[5] He also wrote many works for organ, piano, and orchestra, including a Concerto Gregoriano for organ and orchestra (with a companion version for organ and piano),[6] Speranza (Hope) - Solo for Diapason, Concert Study #1[7] and #2, American Rhapsody [8] and a concerto for oboe.

On April 9, 1943 Yon suffered a massive stroke that paralyzed his entire right side. As a result he was unable to fulfill his obligations at St. Patrick's Cathedral and was temporarily replaced by long-time assistant Edward Rivetti.

At first Yon was sent to Columbia Hospital. Eventually it was decided to move him to a friend's house in Long Island where it was thought that he would recover better. In the meantime the Cathedral left his position open and refused application from organists who wanted to replace him.

In time it became obvious that Yon's injuries would take a long time to recover if at all. Charles M. Courboin was available as a substitute "for the duration of the illness of Pietro Yon". He was heavily engaged in a recital and teaching career in addition to consultation on many new organs and performing radio broadcasts on WOR. On October 2, 1943 Courboin was appointed interim organist while Yon was ill.

Yon died in Huntington, New York on November 22, 1943, the feast of St Cecelia. His funeral, which took place on the 25th was attended by 1,300 including Toscanini. Courboin conducted the choir in Yon's own Mass of Requiem.

This article uses material from the article Pietro Yon from the free encyclopedia Wikipedia and it is licensed under the GNU Free Documentation License.