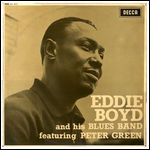 Boyd moved to the Beale Street district of Memphis, Tennessee in 1936 where he played piano and guitar with his group, the Dixie Rhythm Boys. Boyd followed the great migration northward to the factories of Chicago, Illinois in 1941.[2]

He wrote and recorded the hit songs "Five Long Years" (1952), "24 Hours" (1953), and the "Third Degree" (co-written by Willie Dixon, also 1953).[2] Boyd toured Europe with Buddy Guy's band in 1965 as part of the American Folk Blues Festival.[2] He later toured and recorded with Fleetwood Mac and John Mayall and the Bluesbreakers.

Tired of the racial discrimination he experienced in the United States, he first moved to Belgium[1] where he recorded with the Dutch band, Cuby and the Blizzards. He settled in Helsinki, Finland in 1970,[2] where he recorded ten blues records, the first being Praise to Helsinki (1970). He married his wife, Leila, in 1977.

Boyd died in 1994 in Helsinki, Finland, just a few months before Eric Clapton released the chart-topping blues album, From the Cradle that included Boyd's "Five Long Years" and "Third Degree".

This article uses material from the article Eddie Boyd from the free encyclopedia Wikipedia and it is licensed under the GNU Free Documentation License.