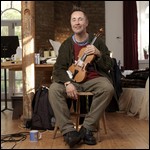 Nigel Kennedy (born 28 December 1956) is an English violinist and violist. He made his early career in the classical field, and has more recently performed in jazz, klezmer and other music genres.

Kennedy's grandfather was Lauri Kennedy, principal cellist with the BBC Symphony Orchestra,[1] and his grandmother was Dorothy Kennedy, a pianist. Lauri and Dorothy Kennedy were Australian, while their son, the cellist John Kennedy, was born in England. After graduating from the Royal Academy of Music in London, at age 22, John joined the Liverpool Philharmonic Orchestra, later becoming the principal cellist of Sir Thomas Beecham's Royal Philharmonic Orchestra. While in England, John developed a relationship with an English pianist, Scylla Stoner, with whom he eventually toured in 1952 as part of the Llewellyn-Kennedy Piano Trio (with the violinist Ernest Llewellyn; Stoner was billed as "Scylla Kennedy" after she and John married). But they ultimately divorced, and John returned to Australia.[2] Kennedy has about 30 close relatives in Australia, whom he visits whenever he tours there.[3]

Kennedy was born in Brighton. A boy prodigy, as a 10-year-old he would pick out Fats Waller tunes on the piano after hearing his stepfather's jazz records.[4] At the age of 7, he became a pupil at the Yehudi Menuhin School of Music.[5] He later studied at the Juilliard School in New York City with Dorothy DeLay.

At the age of 16, Kennedy was invited by leading jazz violinist Stéphane Grappelli to appear with him at New York's Carnegie Hall.[6] He made his recording debut in 1984 with Elgar's Violin Concerto. His subsequent recording of Vivaldi's The Four Seasons with the English Chamber Orchestra in 1989 sold over two million copies and earned a place as one of the best-selling classical recordings ever.[7] The album remained at the top of the UK classical charts for over a year, with total sales of over three million units.[8]

Kennedy published his autobiography, Always Playing, in 1991.[9] He then withdrew completely from public performance, at which point he made the album Music in Colours with Stephen Duffy. He returned to the international concert platform five years later. In 1997, he received an award for Outstanding Contribution to British Music at the BRIT Awards, and in 2001 received the 'Male Artist of the Year' award.[10]

In other music genres, Kennedy recorded a cover of Jimi Hendrix's "Fire" for the 1993 album Stone Free: A Tribute to Jimi Hendrix. The same year, he made an appearance on Robert Plant's solo album Fate of Nations on the track "Calling to you". In 1999, Sony Classical released The Kennedy Experience, which featured improvisational recordings based on Hendrix compositions.[11] In 2000, he recorded Riders on the Storm: The Doors Concerto (with Jaz Coleman), a violin-based orchestral version of Doors songs, including "Strange Days", "LA Woman", "The End", and "Riders on the Storm". On 27 November 2000, Kennedy joined rock group The Who at the Royal Albert Hall to play the violin solo in the song "Baba O'Riley", released three years later on the album Live at the Royal Albert Hall. Kennedy also played on several tracks – notably "Experiment IV" – by British singer-songwriter Kate Bush, who was a guest on Kennedy's episode of This Is Your Life. He was featured on two of Sarah Brightman's songs for her 2003 album Harem. He has explored Klezmer music with the Polish jazz band Kroke.[12] In late 2005, Kennedy recorded his first album for the jazz label Blue Note Sessions, with Ron Carter on double bass, Jack DeJohnette on drums and saxophonist Joe Lovano.

Kennedy returned to the 2008 Proms after an absence of 21 years, performing Elgar's Violin Concerto and a late-night Prom with the Nigel Kennedy Quintet.[13]

Kennedy's persona is seen by some as abrasive and limiting to his career.[17] They cite as an example his use of a mockney accent instead of the received pronunciation he had when he was interviewed as a child in 1964 on the BBC's Town and Around.[18]

In 1991 John Drummond criticised Kennedy publicly, calling him "a Liberace for the nineties" and noting specifically his "ludicrous" clothes and "self-invented accent".[19]

Until 2006, Kennedy expressed his intention of not appearing on the classical London concert scene with a London orchestra, which was seen by some as arrogance,[6] although he rationalised it in terms of frustrated perfectionism:

It all comes down to the amount of rehearsal you get, or don't get, in this country. I insist on three or four sessions prior to a concert, and orchestral administrators won't accommodate that. If I didn't care about getting it right, I could do three concerts in the same amount of time and earn three times the money. But you can't do something properly in less time than it takes.[6]

Kennedy expresses a preference[20] for the immediate appeal of live performance, and often records entire works or movements in single takes to preserve this sense in his recordings. He also introduces improvised elements to his performances, as in his Jimi Hendrix-inspired cadenza to Beethoven's Violin Concerto and his jazz and fusion recordings.

Kennedy was romantically involved with singer/guitarist Brix Smith after she broke up from husband Mark E. Smith in 1989.[21][22] Kennedy currently divides his time among residences in Malvern, Worcestershire (where his former girlfriend and son Sark live), London and Kraków, Poland. He has been married twice; his second wife, Agnieszka, is Polish.[6][23]

Kennedy has admitted to regularly smoking cannabis to aid his creativity.[24]

Kennedy is a well-known Aston Villa F.C. supporter.[6] At Przystanek Woodstock 2010, he had his orchestra wear Aston Villa shirts and led the crowd in the team's chants. While living and recording in Poland, he also took an active interest in KS Cracovia, in whose 100th anniversary club replica kit he appeared.

Kennedy is an avowed socialist.[25] He supported David Davis's campaign when he quit his Shadow Home Secretary post to force a by-election, in protest over proposals to allow terrorist suspects to be locked up for 42 days without charge. Kennedy is a vocal opponent of Israel's policies in the West Bank, and, in the summer of 2007, he told a Ha'aretz reporter:

I was shocked to see these walls, it's a new apartheid, barbaric behaviour: How can you impose such a collective punishment and separate people? After all, we are all living on the same planet. It seems to me the world should have already learned from what happened in South Africa. And a country that hasn't learned should be boycotted, so that's why I don't perform in your country.[26]

In 2013, the BBC censored the violinist's attribution of apartheid to Israel, which had been made during a Proms performance, from its broadcast of the event.[27] Kennedy registered his objection to the removal of his remarks from the telecast, during which he had said,[28]

Ladies and gentlemen, it's a bit facile to say it but we all know from experiencing this night of music tonight, that given equality, and getting rid of apartheid, gives a beautiful chance for amazing things to happen.[29]

Kennedy has owned or played instruments by:

This article uses material from the article Nigel Kennedy from the free encyclopedia Wikipedia and it is licensed under the GNU Free Documentation License.