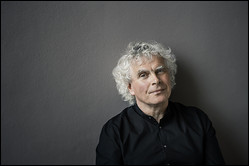 He rose to international prominence during the 1980s and 1990s, while Music Director of the City of Birmingham Symphony Orchestra (1980–98). Rattle was principal conductor of the Berlin Philharmonic from 2002 to 2018.

It was announced in March 2015 that Rattle would become Music Director of the London Symphony Orchestra from September 2017.

As a passionate supporter of music education, Rattle is also the patron of Birmingham Schools' Symphony Orchestra, arranged during his tenure with CBSO in mid 1990s. The Youth Orchestra is now under the auspices of charitable business Services for Education.[1]

Simon Rattle was born in Liverpool, the son of Pauline Lila Violet (Greening) and Denis Guttridge Rattle, a lieutenant in the RNVR during WWII.[2] He was educated at Liverpool College. Although Rattle studied piano and violin, his early work with orchestras was as a percussionist for the Merseyside Youth Orchestra (now Liverpool Philharmonic Youth Orchestra). He entered the Royal Academy of Music (now part of the University of London), in 1971. There, his teachers included John Carewe. In 1974, his graduation year, Rattle won the John Player International Conducting Competition.

After organising and conducting a performance of Mahler's Second Symphony while he was still at the Academy, he was talent-spotted by the music agent Martin Campbell-White, of Harold Holt Ltd (now Askonas Holt Ltd), who has since managed Rattle's career.[3] He spent the academic year 1980/81 at St Anne's College, Oxford studying English Language and Literature.[4] He had been attracted to the college by the reputation of Dorothy Bednarowska, Fellow and Tutor in English.[5] He was elected an Honorary Fellow of St Anne's in 1991.[6] He was admitted to the degree of Doctor of Music honoris causa of the University of Oxford in 1999.[7]

In 1974, he was made assistant conductor of the Bournemouth Symphony Orchestra. His first Prom at the Royal Albert Hall, conducting the London Sinfonietta, was, according to the BBC Proms Archive web-site, on 9 August 1976. The programme included Harrison Birtwistle's Meridian and Arnold Schoenberg's First Chamber Symphony. In 1977 he became assistant conductor of the Royal Liverpool Philharmonic.

His time with the City of Birmingham Symphony Orchestra (CBSO) from 1980 to 1998 drew him to the attention of critics and the public. In 1980, Rattle became the CBSO's Principal Conductor and Artistic Adviser, and in 1990, Music Director. Rattle increased both his profile and that of the orchestra over his tenure. One of his long-term concert projects was the series of concerts of 20th-century music titled "Towards the Millennium". One other major achievement during his time was the move of the CBSO from its former venue, Birmingham Town Hall, to a newly built concert hall, Symphony Hall, in 1991. The BBC commissioned film director Jaine Green to follow him in his final year with the CBSO to make Simon Rattle—Moving On.

Rattle was appointed a CBE in 1987 and made a Knight Bachelor in 1994. In 1992, Rattle was named a Principal Guest Conductor of the Orchestra of the Age of Enlightenment (OAE), along with Frans Brüggen. Rattle now has the title of Principal Artist with the OAE. In 2001, he conducted the OAE at Glyndebourne in their first production of Fidelio with a "period-instrument" orchestra.[8]

Rattle strongly supported youth music. He led two attempts at gaining the record for the World's Largest Orchestra, both designed to raise awareness of youth music in schools. The first, in 1996, was unsuccessful. The second, in 1998, did succeed and the record held at nearly 4,000 musicians[9] until it was broken in 2000 by a group in Vancouver.[10]

In 2000 Rattle was presented with the Gold Medal of the Royal Philharmonic Society and in May 2006 he was made an Honorary Fellow of the Society of Arts. In 2011, the Royal Academy of Music presented him with an Honorary Doctorate. He was appointed Member of the Order of Merit (OM) in the 2014 New Year Honours.[11]

Rattle conducted the London Symphony Orchestra at the Opening of the London Olympics 2012.

Rattle made his conducting debut with the Berlin Philharmonic (BPO) in 1987, in a performance of Gustav Mahler's Symphony No. 6. In 1999, Rattle was appointed as successor to Claudio Abbado as the orchestra's principal conductor.[12] The appointment, decided on in a 23 June vote by the orchestra's members, was somewhat controversial, as several members of the orchestra were earlier reported to have preferred Daniel Barenboim for the post.[13] Nevertheless, Rattle won the post and proceeded to win over his detractors by refusing to sign the contract until he had ensured that every member of the orchestra was paid fairly, and also that the orchestra would gain artistic independence from the Berlin Senate.[14]

Before leaving for Germany and on his arrival, Rattle controversially attacked the British attitude to culture in general, and in particular the artists of the Britart movement,[15] together with the state funding of culture in the UK.[16]

Since his appointment, Rattle has reorganised the Berlin Philharmonic into a foundation, meaning its activities are more under the control of the members rather than politicians. He has also ensured that orchestra members' wages have increased quite dramatically, after falling over the previous few years.[17] He gave his first concert as principal conductor of the BPO on 7 September 2002, leading performances of Thomas Adès' Asyla and Mahler's Symphony No. 5, performances which received rave reviews from the press worldwide[18] and were recorded for CD and DVD release by EMI. Early collaborative projects in the Berlin community with Rattle and the BPO involved a choreographed performance of Stravinsky's The Rite of Spring and a film project with Mark-Anthony Turnage's Blood on the Floor.[19] He has also continued to champion contemporary music in Berlin.[20] The orchestra has established its first education department during Rattle's tenure.[21]

Criticism of Rattle's tenure with the Berlin Philharmonic began to appear after their first season together,[22] and continued in their second season.[23] Rattle himself stated in 2005 that his relationship with the BPO musicians could sometimes be "turbulent", but also "never destructively so".[24]

In 2006, a new controversy began in the German press as to the quality of Rattle's concerts with the Berlin Philharmonic, with criticism from the German critic Manuel Brug in Die Welt.[25] One musician who wrote to the press to defend Rattle was the pianist Alfred Brendel.[26] In 2007, the BPO/Rattle recording of Brahms's Ein deutsches Requiem received the Classic FM Gramophone best choral disc award.[27]

Rattle was originally contracted to lead the BPO through 2012, but in April 2008 the BPO musicians voted to extend his contract as chief conductor for an additional ten years past the next season, to 2018.[28] In January 2013, he announced that he would not extend his contract beyond the 2018 season.[29] On Wednesday evening, June 20, 2018, Sir Simon Rattle conducted his last Berlin Philharmonic Orchestra concert as their chief conductor, having chosen Mahler's Sixth Symphony to complete his formal tour with the Berlin Philharmonic Orchestra.

UNICEF appointed Rattle and the BPO as Goodwill Ambassadors in November 2007.[30] He is a patron of the Elton John AIDS Foundation.[31]

Conducting in the United States

In 2000, Rattle was the Music Director of the esteemed Ojai Music Festival.

It was revealed and confirmed in March 2015 that Rattle had accepted the post of Music Director of the London Symphony Orchestra (LSO), an orchestra which he described in a BBC Radio interview as having the "rare mindset of always looking forward".[41] He took up this position in September 2017.[42][43]

Rattle has conducted a wide variety of music, including some with "period instruments" (either modern musical instruments whose design is similar to that of instruments commonly in use at the time the piece was composed or the actual historical instrument itself), but he is best known for his interpretations of late 19th- and early 20th-century composers such as Gustav Mahler, with a recording of Mahler's Second Symphony winning several awards on its release.[44] He has also championed much contemporary music, an example of this being the 1996 TV series Leaving Home, where he presents a 7-part survey of musical styles and conductors with excerpts recorded by the CBSO.

Other recordings in Berlin have included Dvořák tone poems, Mahler's Symphony No. 9 and Claude Debussy's La Mer. The Gramophone Magazine praised the latter as a "magnificent disc" and drew favourable comparisons with interpretations of the piece by Rattle's immediate predecessors, Claudio Abbado and Herbert von Karajan. He has also worked with the Toronto Children's Chorus. Rattle and the BPO also recorded Gustav Holst's The Planets (EMI), which was the BBC Music Magazine Orchestra Choice. In addition, Rattle's acclaimed[45] complete 1989 recording of George Gershwin's opera Porgy and Bess was used as the soundtrack for the equally acclaimed[46][47] 1993 television production of the work. It was the first made-for-television production of Porgy and Bess ever presented. Rattle's 2007 recording of Johannes Brahms's Ein deutsches Requiem received praise from BBC Music Magazine, as "Disc of the Month" for April 2007, "as probably the best new version of the Requiem I've heard in quite some years." Rattle and the BPO have also released recordings of Anton Bruckner's Fourth Symphony (Romantic), and Joseph Haydn's Symphonies Nos. 88, 89, 90, 91, 92 and Sinfonia Concertante.

The French Government awarded him the honour of Chevalier de la Légion d'honneur in 2010.

He was elected to the inaugural Gramophone Hall of Fame in 2012.[49]

Rattle is a member of the Incorporated Society of Musicians and a fan of Liverpool Football Club.[54]

This article uses material from the article Simon Rattle from the free encyclopedia Wikipedia and it is licensed under the GNU Free Documentation License.