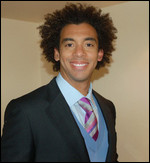 Mason Jr. was born into a musical family. His father, noted jazz drummer Harvey Mason, Sr., and mother, Sally Mason, both attended the Berklee College of Music in Boston.[1] Harvey moved with his family to Los Angeles as a child and followed his father to many recording sessions with such greats as Quincy Jones, The Brothers Johnson and Herbie Hancock. Mason Jr. penned his first song at the age of eight for Grover Washington, Jr. titled "Love Makes It Better".[2]

After attending the University of Arizona on a basketball scholarship from 1986-1990 and playing in the 1988 Final Four, he began working as a songwriter/record producer. Some early work included tracks for British pop artist Michelle Gayle's album "Sensational" in 1997 and the jazz/soul duo Imprompt2. He co-produced the jazz album "Ratamacue" with his father, Harvey Mason Sr. in 1997. In addition he worked with Mason Sr.'s group Fourplay and produced the track "Sexual Healing" featuring El Debarge in 1998.

In 1997, Mason Jr. also penned the track "Truthfully" which caught the attention of record producer, Rodney Jerkins. The track was produced for Brandy's 1998 album "Never Say Never".[3] Mason Jr. then worked with Jerkins over the next three years on projects like Say My Name by Destiny's Child, "It's Not Right, But It's Okay" by Whitney Houston, "He Wasn't Man Enough" by Toni Braxton and on the Invincible by Michael Jackson.

In 2000, Mason Jr. co-wrote the track "I Like Them Girls" with Damon Thomas for Tyrese's album "2000 Watts".[4] The success of that song led to a partnership and the formation of Underdog Entertainment. The Underdogs produced R&B and pop hits like "How You Gonna Act Like That" by Tyrese, "Gots Ta Be" by B2K, "O" by Omarion, "More To Life" by Stacie Orrico, "Sorry 2004" by Ruben Studdard, and No Air by Jordin Sparks and Chris Brown.[5] In 2001, he collaborated with British designer and former member of the Spice Girls Victoria Beckham on her debut album Victoria Beckham on tracks like "Girlfriend" and some b-sides.[6] In 2004, The Underdogs signed a label deal through BMG under Clive Davis[7] and created Underdog Music Publishing, a joint venture with Rondor/Universal Music.[8] In 2006, The Underdogs produced the soundtrack to the motion picture Dreamgirls which won the Critic's Choice Award in 2007 for best movie soundtrack.[9] After a three year hiatus, The Underdogs reunited in 2011 to produce "Up 2 You" for Chris Brown's album "F.A.M.E.". The Underdogs wrote and produced the song "Living Proof" performed by Mary J. Blige for the movie "The Help". The Underdogs wrote and produced the second single from Chris Brown's album Fortune titled Turn Up the Music. In 2012 The Underdogs produced the vocals for the film Pitch Perfect, starring Anna Kendrick and Brittany Snow.[10] The Underdogs are currently producing music for the upcoming film "Get on Up" about the life of James Brown.

Mason Jr. formed his independent company Harvey Mason Media in 2008. It encompasses his film and record productions, music publishing, and website ventures. Record productions include the 2008 releases of Chris Brown's, "Superhuman" from the album "Exclusive", Britney Spears', "Mannequin" from the album "Circus"[11] and Jennifer Hudson's, "You Pulled Me Through" from her self-titled debut album. He produced the title track "I Look To You" along with Tricky Stewart and the cover of "Song for You" along with Stargate for Whitney Houston's 2009 album "I Look To You". .[12] In 2010, Mason Jr. produced the updated version of "One Shining Moment" featuring Jennifer Hudson for CBS Sports to be featured during the Final Four.[13] Mason Jr. produced and worked as A&R on Toni Braxton's Pulse. In 2011, Mason Jr. produced the first single "Where You At" along with R. Kelly for Jennifer Hudson's album "I Remember Me"

Harvey Mason Media produced the feature film "More Than A Game in 2008. This inspirational movie documents the rise of LeBron James and his high school teammates from their early AAU basketball days to the high school national championship stage. The film received rave reviews when it premiered at the Toronto Film Festival in 2008 where it won first runner up to best film, Slumdog Millionaire.[14] Lions Gate Films will distribute the film with a fall 2009 release.[15] Harvey Mason Music and Interscope Records distributed the soundtrack album titled "Music Inspired by More Than a Game". "More Than A Game" is nominated for best documentary at the 2010 NAACP Image Awards and the Independent Spirit Awards.

Mason Jr. is also the musical consultant on the social networking website "Sweety High which launched in February 2010. He appeared on the 2011 season of American Idol as a mentor/producer, working with Pia Toscano and Jacob Lusk. He also worked as a mentor/producer on the 2013 season of The X Factor USA. He has also made numerous appearances on the reality series Braxton Family Values on the WEtv Network starring Toni Braxton and Tamar Braxton.

Mason Jr. was elected to the board of the directors for the Los Angeles chapter of NARAS (National Academy of Record Arts and Sciences) in 2007 and the Nationa Board of Trustees in 2009. He has participated in Grammy Foundation events including Grammy in the Schools, Grammy Camp[16] and the Music Cares Foundation.

Mason Jr. has also achieved great success on the basketball court. As a guard on the Crescenta Valley High School team in La Crescenta, California he was selected to the All-CIF (California Interscholastic Federation) team in 1984, 1985 and 1986. He received a full-scholarship to the University of Arizona and played for Hall of Fame coach, Lute Olson. Mason Jr.'s teams won the Pac-10 title in 1988, 1989 and 1990 and played in the Final Four in 1988.[17] Notable teammates include Steve Kerr (Chicago Bulls), Jud Buechler (Chicago Bulls), Bison Dele (Chicago Bulls), Sean Elliott (San Antonio Spurs) and Kenny Lofton (Major League Baseball six time all-star).[18] Multiple knee surgeries sidelined Mason Jr.s hope of a continuing basketball career. Most recently he has played in the NBA Entertainment League where he has been consistently selected to the all-star team. Mason Jr. serves on the National Leadership Council and the Board of Trustees for the University of Arizona.

This article uses material from the article Harvey Mason, Jr. from the free encyclopedia Wikipedia and it is licensed under the GNU Free Documentation License.