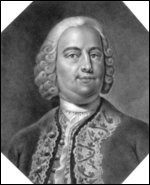 born in 1703 in Uebigau-Wahrenbrück, Brandenburg, Germany

Carl Heinrich Graun (7 May 1704 – 8 August 1759) was a German composer and tenor singer. Along with Johann Adolph Hasse, he is considered to be the most important German composer of Italian opera of his time.[1]

Graun was born in Wahrenbrück in the Margraviate of Brandenburg. In 1714, he followed his brother, Johann Gottlieb Graun, to the school of the Kreuzkirche, Dresden, and sang in the Dresdner Kreuzchor and the chorus of the Dresden Opera. He studied singing with Christian Petzold and composition with Johann Christoph Schmidt. In 1724, Graun moved to Braunschweig, singing at the opera house and writing six operas for the company. In 1735, Graun moved to Rheinsberg in Brandenburg, after he had written the opera Lo specchio della fedeltà for the marriage of the then crown prince Frederick (the Great) and Elisabeth Christine in Schloss Salzdahlum in 1733. He was Kapellmeister to Frederick the Great from his ascension to the throne in 1740 until Graun's death nineteen years later in Berlin.

Graun wrote a number of operas. His opera Cesare e Cleopatra inaugurated the opening of the Berlin State Opera (Königliche Hofoper) in 1742. Montezuma (1755) was written to a libretto by King Frederick. His works are rarely played today, though his passion cantata Der Tod Jesu (The Death of Jesus, 1755) was frequently performed in Germany for many years after his death. His other works include concertos and trio sonatas.

He married twice and had a daughter, who became a singer, from his first marriage and four sons from his second. His great-great-great-great-grandson, Vladimir Nabokov,[2] became an eminent 20th-century novelist.

This article uses material from the article Carl Heinrich Graun from the free encyclopedia Wikipedia and it is licensed under the GNU Free Documentation License.