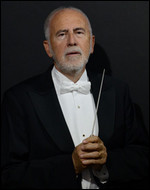 López-Cobos was born in Toro, Zamora, Castile-León, Spain. He studied at Complutense University of Madrid and graduated with a degree in philosophy. Later he studied conducting with Franco Ferrara and with Hans Swarowsky at the University of Music and Performing Arts in Vienna.

This article uses material from the article Jesús López-Cobos from the free encyclopedia Wikipedia and it is licensed under the GNU Free Documentation License.