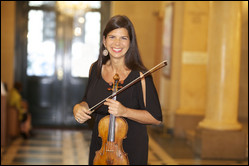 Pamela Frank (born June 20, 1967) is an American violinist, with an active international career across a varied range of performing activity. Her musicianship was recognized in 1999 with the Avery Fisher Prize, one of the highest honors given to American instrumentalists. In addition to her career as a performer, Frank holds the Herbert R. and Evelyn Axelrod Chair in Violin Studies at the Curtis Institute of Music where she has taught since 1996. [1]

She was born in New York City, the daughter of two pianists, Claude Frank and Lilian Kallir. She studied under Shirley Givens using the Givens Method, unlike many of her contemporaries, who generally begin with the Suzuki Method as children. She began her performing career in 1985, when she appeared with Alexander Schneider and the New York String Orchestra at Carnegie Hall.

Pamela Frank has performed regularly with today's most distinguished soloists and ensembles, including the orchestras of Philadelphia, Chicago, Cleveland, Boston, New York, San Francisco, and Baltimore, as well as the Berlin, St. Petersburg, and Israel philharmonics. Her chamber music projects include performances with such artists as Peter Serkin, Yo-Yo Ma, Emanuel Ax, and her father, Claude Frank, and frequent appearances with the Academy of St. Martin-in-the-Fields, Chamber Music Society of Lincoln Center, and Musicians from Marlboro. In 1999 Pamela Frank was awarded the Avery Fisher Prize, one of the highest honors given to American instrumentalists.[1]

She is on the faculties of the Peabody Institute of Johns Hopkins University, the Curtis Institute of Music, and the State University of New York at Stony Brook.

Since 2012 Pamela Frank is chair of the jury of the Yehudi Menuhin International Competition for Young Violinists.

She is married to physical therapist Howard Nelson.

This article uses material from the article Pamela Frank from the free encyclopedia Wikipedia and it is licensed under the GNU Free Documentation License.

Robert Fuchs Capriccio aus Andante grazioso und Capriccio
Update Required To play the media you will need to either update your browser to a recent version or update your Flash plugin.