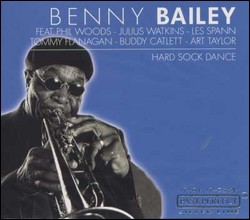 Bailey was born in Cleveland, Ohio. He had some training in piano and flute in his youth, but switched to trumpet, and concentrated on the instrument while at the Cleveland Institute of Music. He was influenced by his hometown colleague, Tadd Dameron, seven years his elder, and subsequently had a significant influence on other prominent Cleveland musicians including Bill Hardman, Bobby Few, Albert Ayler, Frank Wright and Bob Cunningham. Bailey also played with "Big T" Tony Lovano - Joe Lovano's father.

In the early 1940s he worked with Bull Moose Jackson and Scatman Crothers.[1] He later worked with Dizzy Gillespie and toured with Lionel Hampton.[2] During a European tour with Hampton he decided to stay in Europe and spend time in Sweden. This Swedish period saw him working with Harry Arnold's big band.[1] He tended to prefer big bands over small groups and became associated with several big bands in Europe including the Kenny Clarke/Francy Boland Big Band. Later he began to work with Quincy Jones and that led to a brief return to the United States in 1960. During this time, he was invited to the studio as part of Freddie Redd's sextet to record the Blue Note Records album Redd's Blues after meeting the pianist during a tour in Sweden, where Bailey had been residing at the time. Shortly thereafter, he returned to Europe first to Germany, and later to the Netherlands, where he would settle permanently.

In 1969 he played on Eddie Harris and Les McCann's album Swiss Movement, recorded live at the Montreux Jazz Festival, even though it was not his usual style of music, and including a memorable unrehearsed solo on the Gene McDaniels' song "Compared to What". Then in 1988 he worked with British clarinetist Tony Coe[1] and kept producing albums until 2000 when he was in his mid-70s.

This article uses material from the article Benny Bailey from the free encyclopedia Wikipedia and it is licensed under the GNU Free Documentation License.