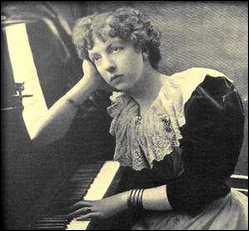 Born in Paris, she studied at first with her mother, then with Félix Le Couppey on piano, Marie Gabriel Augustin Savard, Martin Pierre Marsick on violin, and Benjamin Godard in music composition, but not officially, since her father disapproved of her musical education.[2][3] Her first experiments in composition took place in very early days, and in her eighth year she played some of her music to Georges Bizet, who was much impressed with her talents. She gave her first concert when she was eighteen, and from that time on her work as a composer gained steadily in favor. She wrote mostly character pieces for piano, and salon songs, almost all of which were published.[1]

She toured France several times in those earlier days, and in 1892 made her debut in England, where her work was extremely popular.[2]Isidor Philipp, head of the piano department of the Paris Conservatory championed her works. She repeatedly returned to England during the 1890s and made premieres there with singers such as Blanche Marchesi and Pol Plançon, though this activity decreased after 1899 due to bad critical reviews.[3]

Chaminade married a music publisher from Marseilles, Louis-Mathieu Carbonel, in 1901, and on account of his advanced age, the marriage was rumored to be one of convenience. He died in 1907, and Chaminade did not remarry.[3]

In 1908 she visited the United States, where she was accorded a hearty welcome.[1] Her compositions were tremendous favorites with the American public, and such pieces as the Scarf Dance or the Ballet No. 1 were to be found in the music libraries of many lovers of piano music of the time. She composed a Konzertstück for piano and orchestra, the ballet music to Callirhoé and other orchestral works. Her songs, such as The Silver Ring and Ritournelle, were also great favorites. Ambroise Thomas once said of Chaminade: "This is not a woman who composes, but a composer who is a woman."[4] In 1913, she was awarded the Légion d'Honneur, a first for a female composer.[2][3] In London in 1903, she made gramophone recordings of seven of her compositions for the Gramophone and Typewriter Company; these are among the most sought-after piano recordings by collectors, though they have been reissued on compact disk.[3] Before and after World War I, Chaminade recorded many piano rolls, but as she grew older, she composed less and less, dying in Monte Carlo on 13 April 1944.

Chaminade was relegated to obscurity for the second half of the 20th century, her piano pieces and songs mostly forgotten, with the Flute Concertino in D major, Op. 107, composed for the 1902 Paris Conservatoire Concours, her most popular piece today.[1]

Many of Chaminade's piano compositions received good reviews from critics, but some of her other endeavors and more serious works were less favourably evaluated, albeit perhaps on account of gender prejudices.[2] Most of her compositions were published during her lifetime and were financially successful.[1][2]

Chaminade's music has been described as tuneful, highly accessible and mildly chromatic, and it may be regarded as bearing the typical characteristics of late-Romantic French music.[1]

This article uses material from the article Cécile Chaminade from the free encyclopedia Wikipedia and it is licensed under the GNU Free Documentation License.