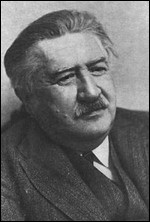 Suk was taught organ, violin, and piano by his father, also known by the name Josef Suk. Though he did not start composing until 1891, he was well-trained in music. He was trained further in violin by the Czech violinist Antonín Bennewitz and his theory studies were conducted with several others including composer Josef Bohuslav Foerster, Karel Knittl, and Karel Stecker. He later focused his writing on chamber works under the teachings of Hanu Wihan.[1] All of his training aside, his musical skill was said to be an inheritance.[2] Though continuing his lessons with Wihan another year after his schooling was complete, one of Josef Suk's largest inspirations was one of his teachers, Czech composer Antonín Dvoák.[3]

Because of their heritage and deaths coming in the same year, Suk's works and style were compared closely to Czech composer Otakar Ostril.[4] Known as one of Dvoák's favorite pupils, Suk and Dvoák became very close.[5] This could pertain to Dvoák's respect for Suk, and the same respect for Suk can be recognized in the fact that Suk later married Dvoák's daughter, Otilie. This marked some of Suk's happier times in his life and music.[6] However, the last portion of Suk's life was stricken with tragedy.[7] Over the span of 14 months around 1905, not only did Suk's mentor, Dvoák, die, but so did Otilie. These events inspired Suk's Asrael Symphony. Suk retired in 1933,[8] although he continued to be a very valuable and inspirational person to his Czech people.[9]

Suk, alongside Vitezslav Novak and Ostril, was considered to be one of the leading composers in Czech Modernism, with much of this influence coming from Dvoák.[10] Popular composers, such as Johannes Brahms and Eduard Hanslick, recognized Suk's work during his time with the Czech Quartet.[11] Over time, other well-known Austrian composers, like Gustav Mahler and Alban Berg, also began to take notice of Suk.[12] Although he wrote mostly instrumental music, Suk occasionally branched out into other genres. His orchestral music was his strong suit, notably the Serenade for Strings, Op. 6 (1892).[13] His time with the Czech Quartet, though successfully performing concerts up until his retirement,[14] was not always met with approval. Several anti-Dvoák campaigns began to rise, and criticism was pointed at the quartet and Suk, specifically. Zdenk Nejedlý accused the Czech Quartet of playing concerts in the Czech lands during a time of war. These attacks diminished Suk's spirits, but did not hinder his work.[15]

Suk's musical style started off with a very heavy emphasis on what he experienced during his time with Dvoák, though this Czech-style influence eventually slowly became more German and Austrian in style. The biggest change of Suk's style came after a "dead end" in his musical lifestyle (music played less of a role in Suk's life outside of his schooling[16]) just before he began the shift of style during 1897-1905, perhaps realizing that his known Dvoák influence would restrain his work.[17] Morbidity was always a large factor in Suk's music. For instance, he wrote his own funeral march in 1889. Ripening, a symphony, was also a story of pain and questioning the value of life. Others of his works represent his happiness, such as the music he set to Julius Zeyer's drama Radúz a Mahulena (which he referenced to his marriage with Otilie). Another of Suk's works, Pohádka ('Fairy Tale'), was drawn from his work with Radúz a Mahulena. The closest Suk came to working with opera is music his wrote for the play Pod jabloní or 'Beneath the Apple Tree'.[18]

The majority of Suk's papers are kept in Prague. There is also a new catalogue of Suk's works that contains more manuscripts than any before it, some of them also containing sketches by Suk.[19]

Suk said of himself: "I do not bow to anyone, except to my own conscience and to our noble Lady Music and yet at the same time I know that thereby I serve my country, and praise the great people from the period of our wakening who taught us to love our country."[20]

This article uses material from the article Josef Suk (composer) from the free encyclopedia Wikipedia and it is licensed under the GNU Free Documentation License.