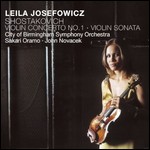 Josefowicz was born in Missisauga, Ontario, Canada. When she was a young child her family moved to Los Angeles, California, where she started studying violin at the age of three and a half using the Suzuki method. Her father, physicist Jack Josefowicz, and mother, biologist Wendy Josefowicz, learned with her. At age five she started formal lessons with Idel Low. At seven she began studies with the distinguished violin teacher Robert Lipsett at The Colburn School. Leila's parents, valuing a well-rounded education, believed that both she and her brother Steven should stay in the public school system, and Leila attended public middle and high school despite a very full schedule of music activities.[1]

When Leila was 13 the Josefowiczes moved to Philadelphia so she could attend the prestigious Curtis Institute of Music, where she studied with Jaime Laredo, Jascha Brodsky, Felix Galimir and Joseph Gingold. Leila also attended the Julia R. Masterman School in Philadelphia while at Curtis, completing a bachelor of music degree and her high school diploma in the same year.

Josefowicz made her Carnegie Hall debut in 1994 performing the Tchaikovsky Concerto with Sir Neville Marriner and the Academy of St. Martin in the Fields.[2][3] The same year she signed an exclusive recording contract with Philips Classics, recording the Tchaikovsky and Sibelius concertos. Other recordings followed on Warner Classics,[4] Nonesuch Records and Deutsche Grammophon[5] labels that include masterworks for solo violin, recital repertoire and the concertos of Romantic and modern composers.

Josefowicz has kept a busy international schedule as a soloist, performing regularly around the world, including North and South America, Europe, Japan, China, New Zealand and Australia. She has a strong interest in jazz, improvisation, and new music.

Josefowicz received an Avery Fisher Career Grant in 1994. In 2007, she was named a USA Cummings Fellow, United States Artists. For her advocacy of new contemporary works for the violin, Josefowicz was named a 2008 MacArthur Fellow.

This article uses material from the article Leila Josefowicz from the free encyclopedia Wikipedia and it is licensed under the GNU Free Documentation License.