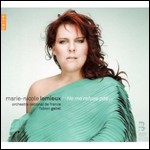 Marie-Nicole Lemieux (born June 26, 1975) is a Canadian coloratura contralto. She first came to the world's attention in 2000 when she became the first Canadian to win first prize at the Queen Elisabeth International Music Competition in Belgium. Since then Lemieux has established herself as one of the finest contraltos currently singing on the classical music stage, appearing with some of the world's best orchestras and singing with many great opera companies. Lemieux is admired for possessing an unusually flexible and beautiful contralto voice that does not have the heaviness that is often associated with her particular voice type. For this reason, Lemieux has become a favorite among lovers of Baroque opera and she is noted for her portrayal of characters in the operas of Handel and Vivaldi in particular. Her voice is admired for its richness, warmth and resonance and for its expressiveness and use of many different tone colours. Lemieux is also praised by critics for the great personality she exudes on stage and for her exceptional communicative power.[1]

Marie-Nicole Lemieux was born in 1975 in Dolbeau-Mistassini, Quebec. In 1994, Lemieux entered the Chicoutimi Conservatoire de musique and began studying voice with Rosaire Simard. After graduating with a degree in voice in 1998, Lemieux continued with graduate studies at the Conservatoire de musique du Québec à Montréal with noted teacher Marie Daveluy. Lemieux graduated with a Masters in voice in 2000 and found almost immediate success. In the span of three weeks, Lemieux won first prize at both the Jeunesse Musicale du Canada's Joseph Rouleau Competition in Montreal and the Queen Elizabeth International Music Competition for opera in Brussels in 2000. Lemieux also took second prize in the separate competition for Lieder at the Queen Elizabeth International competition. Lemieux's success was immediately followed with invitations to perform and/or audition with many of the world's finest orchestras and opera companies.[2]

In 2001, she won the Canada Council Virginia Parker Prize.[1]

In 2002, Lemieux made her professional operatic debut in the role of Cornelia in Handel's Giulio Cesare with the Canadian Opera Company. An auspicous debut as the other cast members in that production included such opera greats as Daniel Taylor, Ewa Podles, Isabel Bayrakdarian and Brian Asawa.[5]

In 2005, she made her debut with the Staatsoper Berlin, performing in Monteverdi's Il ritorno d'Ulisse in patria under the baton of René Jacobs. Later that same year, she performed the role of Mitrena in the world premiere of Vivaldi's Motezuma at the De Doelen Centre in Rotterdam.[6]

In 2006, Lemieux appeared as Alisa in Donizetti's Lucia di Lammermoor with Opéra de Orange and Anna in Berlioz's Les Troyens with Strasbourg Opera.[6]

In 2009, Lemieux is scheduled to perform Geneviève in Pelléas et Mélisande at the Theater an der Wien, Mistress Quickly at the Bavarian State Opera and the Glyndebourne Festival, and Zita in Gianni Schicchi at the Opéra de Montréal among other engagements.[7]

In summer 2010, she performed in recital in Spain and in the title role of Vivaldi's Orlando Furioso.

This article uses material from the article Marie-Nicole Lemieux from the free encyclopedia Wikipedia and it is licensed under the GNU Free Documentation License.

Johann Sebastian Bach Gambensonate Nr.2 D-Dur, bearbeitet für Violoncello und Gitarre
Update Required To play the media you will need to either update your browser to a recent version or update your Flash plugin.