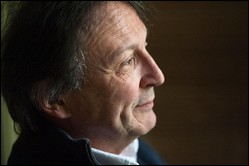 Caussé has shared the stage in both orchestral and chamber music with musicians such as Emmanuel Krivine, Charles Dutoit, and Kent Nagano.[1][2][3]

His recordings include more than thirty-five issued under labels such as EMI, Erato and Philips.[4][5] Caussé is holder of the Banco Bilbao Vizcaya Argentaria Chair of Viola at the Escuela Superior de Música Reina Sofía.[6]

This article uses material from the article Gérard Caussé from the free encyclopedia Wikipedia and it is licensed under the GNU Free Documentation License.

Wolfgang Amadeus Mozart Ouvertüre zur Oper "Don Giovanni"
Update Required To play the media you will need to either update your browser to a recent version or update your Flash plugin.