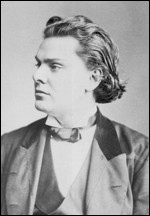 He has become famous for his late nineteenth century arrangement of the second movement of J. S. Bach's Orchestral Suite No. 3 for the violin and piano, known as Air on the G String.

Among his pupils was American violinist Nahan Franko and the multi-talented Canadian musician Donald Heins.

This article uses material from the article August Wilhelmj from the free encyclopedia Wikipedia and it is licensed under the GNU Free Documentation License.